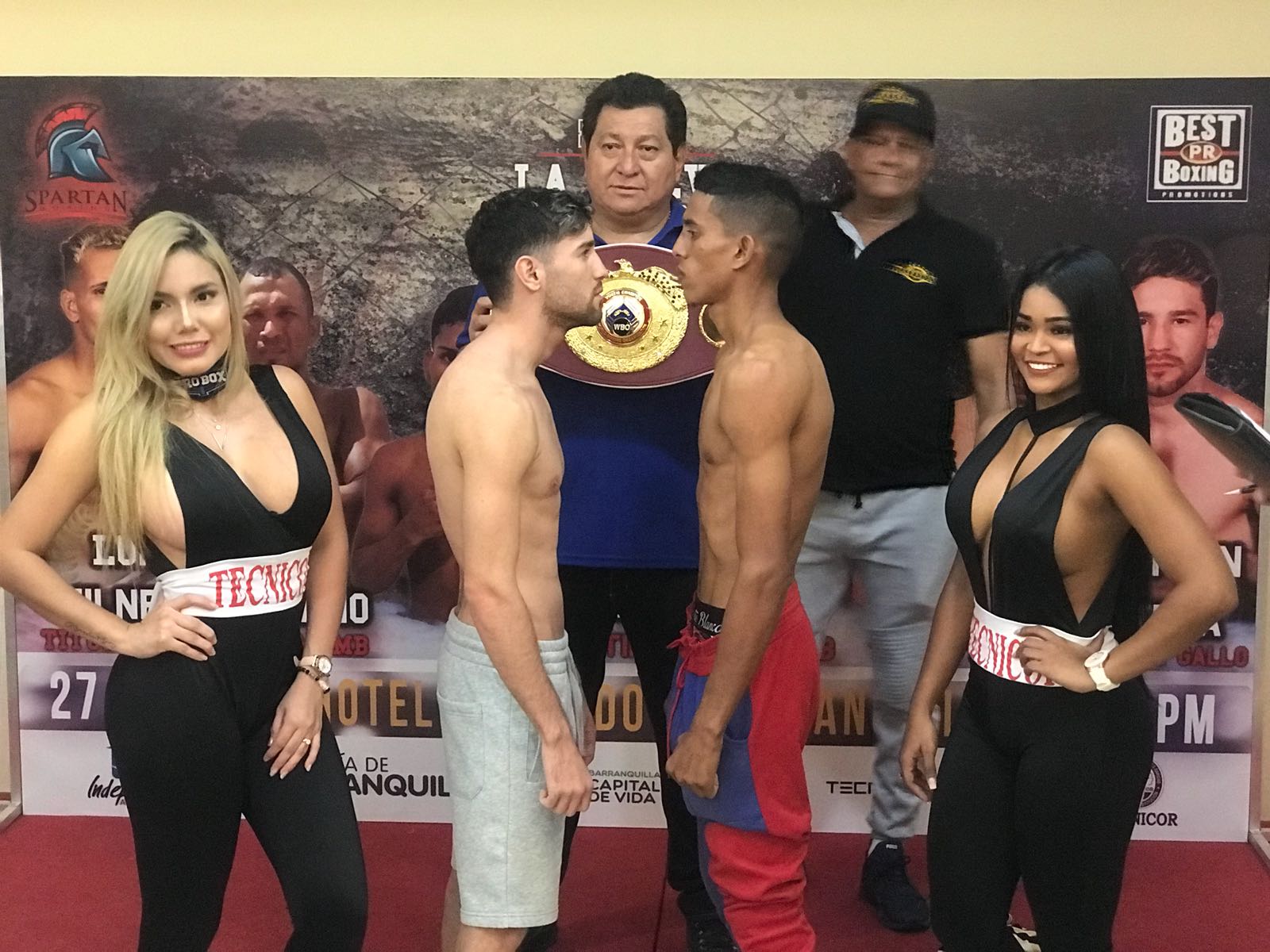 With a wide unanimous decision, Puerto Rican Jeyvier Cintrón was crowned WBO Youth World champion in only his seventh fight, while his countryman Luis “Popeye” Lebrón successfully defended his belt with a TKO victory in fights held on Friday night at Hotel El Prado in Barranquilla, Colombia, in a presentation of Pro Box del Caribe in association with PR Best Boxing Promotions (PRBBP) and Spartan Boxing.

The two-time Puerto Rican Olympian Jeyvier Cintron had no problems with the scale for the first title fight of his career, as did his countryman Luis “Popeye” Lebrón, who will defend his belt in a show to be held tomorrow at Hotel El Prado in Barranquilla, Colombia, in a presentation of Pro Box del Caribe in association with PR Best Boxing Promotions (PRBBP) and Spartan Boxing.

Cintron (6-0, 4 kos) and his opponent Gregory Vera (12-1, 6 kos), from Venezuela, weighed both 118 pounds for their World Boxing Organization (WBO) Youth bantamweight (118 pounds) belt. This battle is scheduled to eight rounds.

Meanwhile, world ranked Lebron (11-0-1, 5 kos), who will defend for the first time his WBO Latino featherweight title, weighed 126 pounds, the same as Venezuela’s Milner Marcano (14-4, 10 kos) for their 10-round brawl.

Another Puerto Rican who will fight in the show will be Wilfredo “Bimbito” Méndez (9-1, 4 kos) facing the Venezuelan Yenrry Bermudez (7-25-2, 1 kos). Both Méndez and Bermúdez weighed 107.5 pounds.

Undefeated Jeyvier Cintrón and Luis “Popeye” Lebrón arrived tonight in Colombia, where on Friday, July 27, they will headline in title matches in a show to be held at the Hotel El Prado in Barranquilla, Colombia.

The two-time Olympian Cintron (6-0, 4 kos) will fight for the World Boxing Organization (WBO) Youth bantamweight championship when he takes on Venezuelan Gregory Vera (12-1, 6 kos). The Puerto Rican boxer traveled with his team led by his trainer and former double world champion Ivan “Iron Boy” Calderón. This will be the fifth fight in 2018 for Cintron.

While, Lebrón (11-0-1, 5 kos), #12 ranked by the OMB in 126 pounds and trained by Joel González, will defend his WBO Latino featherweight title against the Venezuelan Milner Marcano (14-4, 10 kos ) in a bout scheduled to 10 rounds. Lebrón won the belt in April when he beat Luis Ruiz in Colombia.

GUAYNABO, PUERTO RICO – In only his seventh professional fight the two-time Puerto Rican Olympian Jeyvier Cintrón will fight for his first title and he is training intensely, as well as the world classified Luis “Popeye” Lebrón, who will defend his belt in a show to be held on Friday, July 27th, at the Hotel El Prado in Barranquilla, Colombia.

Cintron (6-0, 4 kos), the first and only Puerto Rican fighter to participate in two Olympic Games (2012 and 2016) and belongs to Top Rank, will fight for the World Boxing Organization (WBO) World Youth Championship in the bantamweight (118 pounds) division against Venezuelan Gregory Vera (12-1, 6 kos) in an eight rounds bout. It will be the fifth fight this year for Cintron, who trains under the orders of former world double monarch Ivan “Iron Boy” Calderón.

“This is my first fight for a WBO youth world title, we are training hard for that great fight and we hope to win it to be crowned world youth champion with only seven fights,” said Cintron during a workout at the Félix Pagán Pintor Gym. “(The fight) Is very important for me to show what we’re made of. We’re going to work hard to achieve great things.”

Meanwhile, Popeye Lebrón (11-0-1, 5 kos) will defend his WBO Latino featherweight belt (126 pounds) against Venezuelan Milner Marcano (14-4, 10 kos) in a 10 round schedule bout. Lebrón, ranked #12 by the WBO at 126 pounds, comes from winning that title last April when he beat Luis Ruiz in Colombia.

“I am happy and excited to have my first defense in Barranquilla, where the Central American and Caribbean Games are being held,” said Lebrón, trained by Joel González. “We are going to face an opponent with 14-4 and we know that he is a strong opponent. but I feel ready for that kind of challenge because mostly my opponents are in that category. You are going to see a better Popeye. “