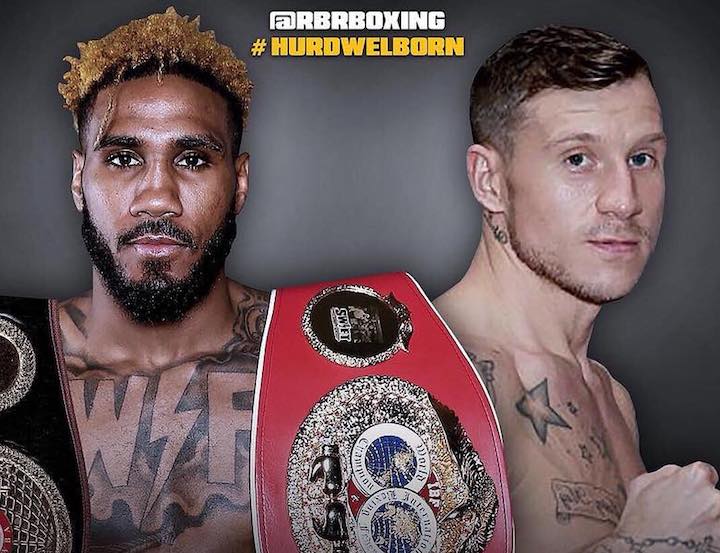 Jason Welborn will cap a remarkable 2018 by travelling to America to challenge undefeated Jarrett Hurd (22-0, 15KO’s) for the WBA ‘Super’ and IBF Super Welterweight Titles.

The 32 year-old (24-6, 7KO’s) will step back down in weight to challenge for the three belts after vacating the British Middleweight title that he won back in May and defended in September. On both occasions, Welborn faced local rival Tommy Langford, and on both occasions he was victorious in epic contests; the first of which won the BBBoC Fight of the Year.

The fight will take place at the Staples Center, LA, on the undercard of Deontay Wilder versus Tyson Fury on Saturday, 1st December.

Revitalised since his return to Errol Johnson’s BCB Promotions, Welborn is in the form of his life and is ready to pit his wits against the world’s best 154 lb fighter.

“Jarrett is a big talent,” Welborn told bcb-promotions.com. “He’s undefeated and holds three belts. He’s big at the weight and is very dangerous. I respect him.

“I know I’m the underdog but I was a 7/1 underdog to beat Tommy Langford back in May. I shocked Britain that night and I’m ready to shock the world in December. I’ve known about this fight for a few weeks and I was straight back in camp after beating Langford in December. This is my time.”

Maryland’s Hurd has recently undergone surgery to repair a torn rotator cuff suffered during his victory over WBA Super World Super Welterweight Champion, Erislandy Lara, in April. Ranked Number One in the World, it’s as tough a test Welborn could face but one that he, and his team, are relishing.

“We are delighted for Jason,” added BCB’s Head of Boxing, Errol Johnson. “He’s earned this opportunity and he’s earned it the hard way.

One of Australian boxing’s brightest young stars Mateo Tapia is keen to book a debut on British soil at the first available opportunity.

The 20-year-old (8-0-KO5) blasted Isaac Buckley aside in September to seize the New South Wales State super-middleweight crown and is currently in Vietnam for an exhibition bout on Saturday; his first taste of international boxing since turning professional.

With his reputation in his homeland growing fast, Tapia welcomes the experience of travelling abroad and already has his sights set on fighting in the UK.

Tapia said: “My ideal 6-12 months is to fight somewhere in the UK to finish off the year. That would top off the year, to box in front of the UK crowd. My girlfriend’s family is from there so I’d have people supporting me there.

“I just want tough fights in which I learn. I learn something new in every single fight so I want to stay dedicated and keep active.

“I’m very excited to be part of an event like this one in Vietnam. I haven’t fought internationally since the amateurs so it’s great to be travelling the world doing something you love.

“The spirit of the Australian team is good. Spirits are high. Everyone is in a great place and we’re going to put on a good show for the people of Vietnam.

“Everyone is enjoying the city Ho Chi Minh. Not many of the Australian team have been here before so it’s all new to them and an experience we’ll never forget.

“Our coach Tony Del Vecchio has changed me from a boy to a man. He helps me with his knowledge of the sport and in life. He has my best interests at heart and we get along so well. “