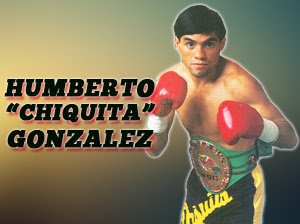 The International Boxing Hall of Fame announced today junior flyweight world champion from Mexico Humberto “Chiquita” Gonzalez will be in Canastota to participate in the Hall of Fame’s 30th Anniversary celebration during the 2019 Hall of Fame Weekend, June 6-9th.

Following an undefeated amateur career (23-0), “Chiquita” turned pro in 1984 and the 5’1” star reigned three times as WBC junior flyweight champion (1989-90, 1991-93, 1994-95), once as IBF champion (1994-95) and registered 12 successful title defenses. He boxed a legendary trilogy with Michael Carbajal (2-1) with their first bout deemed 1993’s “Fight of the Year.” The hard punching Hall of Famer retired after losing the championship to Saman Sorjaturong in 1995’s “Fight of the Year.” “Chiquita’s” pro record stands at 43-3 (30 KOs) and includes wins over Francisco Tejedor, Melchor Cob Castro and Hall of Famer Jung-Koo Chang. In 2006, Gonzalez was elected into the Hall of Fame.

“With incredible knockout power, ‘Chiquita’ Gonzalez was a real fan favorite who thrilled fans throughout his Hall of Fame career,” said Hall director Edward Brophy. “We are so happy that he will travel from his home in Mexico to be with us in in Canastota to celebrate the Hall’s 30th Anniversary.”