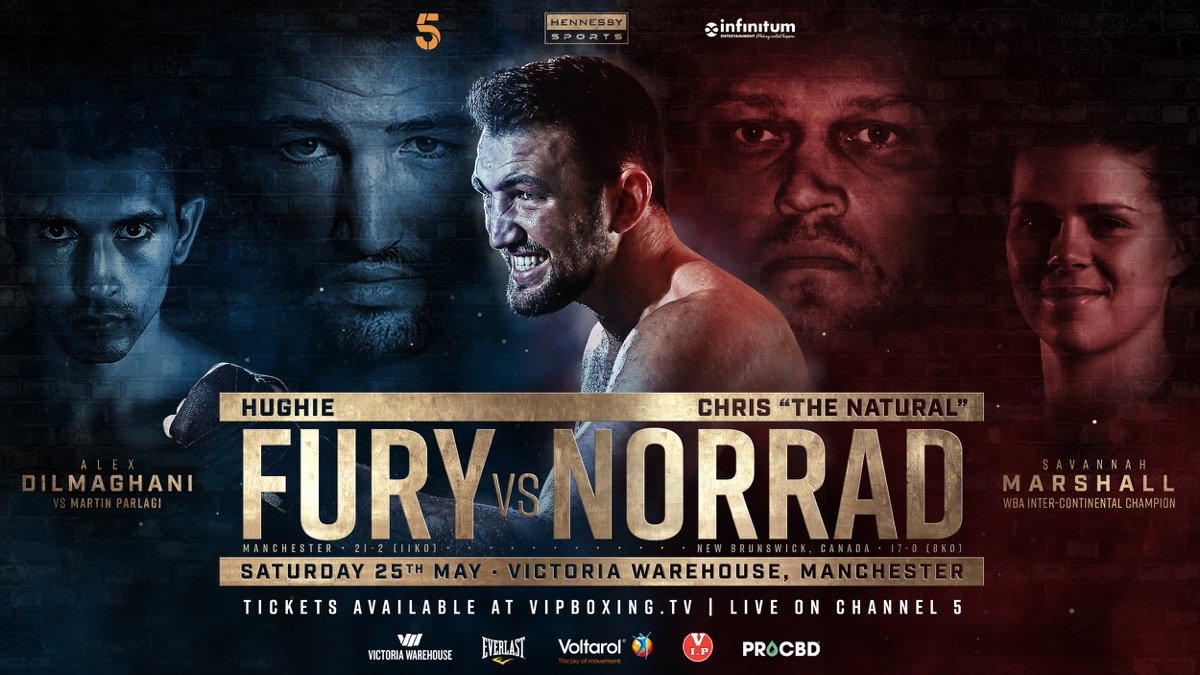 Trainer and father Peter Fury has laid out a blueprint for Hughie Fury to return to world level – starting this Saturday night.

The former world heavyweight title challenger is back in action this weekend against dangerous and undefeated Canadian Chris Norrad (17-0, 8 KOs) at Manchester’s Victoria Warehouse – live on Channel 5.

Having suffered a nasty cut early in October’s showdown with Kubrat Pulev, Peter believes Hughie’s education is preparing him to climb to the very top of the sport.

Peter said: “He’s having four fights this year. He’ll be busy. Then there’ll be three more. Every couple of months, he’ll be out on Channel 5.

“Channel 5 is a fantastic platform not just for him but for all the young fighters on the undercard. The audience levels are phenomenal because it’s free-to-air.

“I don’t think the cut bothered him too much since the Pulev fight. He’s had the laser treatment on it and the eye looks absolutely fine. It’s all good and he’s been sparring without problems.

“It’s all a part of growing up and taking your instructions. A young fighter can make a fight harder than it is. He’s got lots of potential and just has to unlock it.

“Hughie went into the fight with Pulev injured. Kerry Kayes looked at it and said it would open but we had the fight and we make no complaints. He did the best he could do in a bad situation. He had no vision in one eye and still did the rounds.”

The 35 year old former woodsman from the forestry community of Boiestown has already toppled 17 successive oaks of the cruiser and heavyweight divisions, with eight felled before the finish.

Now, in his first start outside Canada, the 6ft 3in ‘Boiestown Banger’ aka ‘The Natural’, has come to chop down local World Youth gold medallist and world ranked heavyweight contender Fury in his home yard.

‘I was a late starter, never really boxed amateur or ‘Tough Man’ contests,’ disclosed self-managed Norrad who trains at the Fredericton Boxing Club under the guise of the Storey brothers Dean and Dwayne.

‘But as a young man, I’d be fighting at the local dances and got myself into a stack of trouble with the law so figured I’d best start fighting legally. I wasn’t really bad tempered, I just got a little excitable. I kinda enjoyed fighting and I must’ve been fairly useful. I never lost any.

‘I was quite interested in boxing long before I became actively involved. I’d studied tapes of how guys like Muhammad Ali and Larry Holmes would win with jabs and incorporated that into my street scuffling. It was pretty easy when the other fella’s just launching haymakers.

‘Around 2009, when I was working in the woods one day, Dean Storey came over and told me that his brother Dwayne was promoting ‘The Next Great Heavyweight’ tournament. Dean said he’d heard how useful I was with my hands and offered to train me. It started there.’

Crafty Chris, then 25, cantered to the crown then repeated the trick in a similar tourney for cruisers in 2010. However, his progression has subsequently been curtailed by lack of opportunity and he has started just seven times in the last seven years.

He explains: I suffered from several hand injuries over the years and broke the right hand very badly whilst winning a fight by stoppage in May of last year. At other times, I’ve been busy with work commitments. I recently started up in transportation.’

In addition to that brace of ‘Next Great….’ titles, he reigned on the NABA Canadian cruiserweight throne following a 10 round points win over Ontario’s Frank White back in 2012.

‘Working in the woods for 10 years built up strength and I possess a pretty powerful right hand,’ warns Norrad who has iced four foes inside the opening two rounds.

‘But I like to think my way through a fight. I’m smart and usually out jab the opposition. If you get the jab going it’ll win the fight for you.

‘There’s been a lot of talk recently of me challenging for the Canadian heavyweight title but I’m sure Team Fury will be screaming for a big money rematch, once I’ve defeated Hughie!’

Hennessy Sports, Channel 5 and Infinitum, in association with VIP Promotions, are delighted to announce that former World Heavyweight title challenger Hughie Fury will make his long awaited return to the ring on Saturday 25th May at the Victoria Warehouse in Manchester, exclusively live on free-to-air Channel 5.

In the headline attraction the Manchester star will take on the undefeated Canadian Chris “The Natural” Norrad in a twelve round International Heavyweight contest, supported by rising star Alex Dilmaghani in an International Super-Featherweight contest and undefeated female sensation Savannah Marshall.

Fury has his first fight since his loss to Kubrat Pulev last October when he pushed the Bulgarian the full twelve rounds in Sofia – despite not been able to see out of his left eye from a cut in the second round – but lost on the judges scorecards. He will be aiming to return to the same destructive form that took him to the British title in May last year when he smashed Sam Sexton in five rounds.

This will be Fury’s first fight back in his home city of Manchester since his WBO World title challenge against Joseph Parker in September 2017 that ended controversially when many felt that Fury had beaten the New Zealander.

The 24-year-old, trained by father Peter, still has plenty of time on his side and aims to get back into World title contention, but first he must deal with Norrad from Boiestown, New Brunswick, who has amassed a perfect record of 17 wins, no losses and eight knockouts.

Fury said, “I can’t wait to get back into the ring in my home city of Manchester, I’ve missed fighting there and you can’t beat home support. It’s back to the drawing board, I know what I’ve got to do. The ambition to become World Champion is still burning fiercer than ever inside me and I believe that I will get there. It all starts again on the 25th May when I take on the unbeaten Norrad from Canada. It’s a crucial fight for me live on Channel 5 with millions watching and I know that a knockout performance will get the ball rolling again.”

Peter Fury added, “This is Hughie’s opportunity to show that he’s back and means business. We’ve been working very hard in the gym since the Pulev fight and we’re ready to go again. We need Hughie back to his best like he was against Sexton to really get his feet back on the comeback trail and banging on the door for a world title shot.”

Chief support on the card features the exciting and highly-avoided Alex Dilmaghani from Worthing, Sussex, who takes on the Czech Republic’s hardened Martin Parlagi. The 27-year-old southpaw has 18 wins and just one very early career points loss on his record and for the last five years has been plying his trade in Canada and Mexico – where he was Juan Manuel Marquez’s sparring partner for the Manny Pacquiao fights. He’s now ready to show just what he can do back on home soil as he pushes to get himself in contention for a world title opportunity.

One of the most exciting female boxers on the scene, the hard-hitting Savannah Marshall, makes her return to the ring as she edges closer to challenge for a World title. Marshall created history when in 2012 she become the first ever British female to win gold at the World Championship in China.

Also trained by Peter Fury, the 27-year-old from Hartlepool captured her first pro title last October when she defeated Yanina Orozco in Sofia to capture the Vacant WBA Intercontinental Super-Middleweight crown. Then in November she destroyed Klaudia Vigh in two rounds in Manchester to take her record to a perfect 5-0 with three knockouts.

Promoter Mick Hennessy said, “I’m delighted to partner with Channel 5, Infinitum and VIP Promotions for this show and it’s great to have Hughie back on the road towards the world title. I believe that he can be one of the very best heavyweights in the division and he has the tools, ability and youth on his side to become World Champion. He’s got an unbeaten fighter in Norrad in front of him and he’ll be coming over here up for the challenge and looking to cause an upset in defeating Hughie on his return. I’m really excited with the up-and-coming talent Alex Dilmaghani and believe that he could be a huge star and the talented and world class Savannah Marshall, is back in action and she is certainly one to watch. Finally, the show is backed up with Brogan versus Hague for the Central Area Lightweight title and Matty Fagan, Conor Lynch and Marcel Braithwaite on the undercard to make this a great night of boxing for the supporters.”