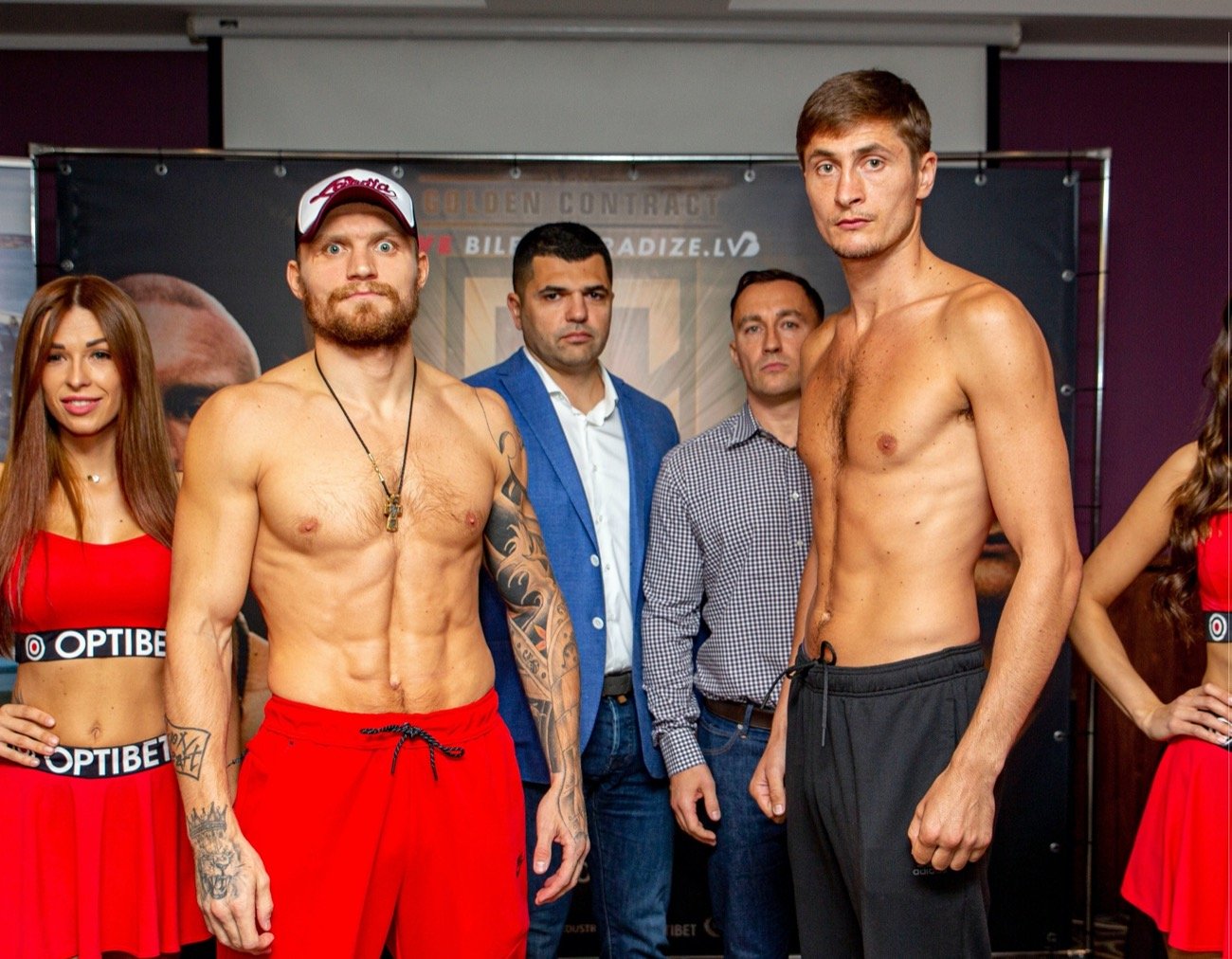 BOLOTNIKS BEATS BURTON – MOVES INTO FINAL! Ricards Bolotniks booked his place in the final of the #GoldenContract light-heavyweight tournament with a victory over Hosea Burton.

The two men were competing at Studio 69 in Riga, Latvia, with a fantastic back and forth battle taking place over 10 hard-fought rounds.

Bolotniks appeared to get the better of the action, with the most dramatic moments coming in round nine when Burton received two standing counts after an onslaught from the Latvian.

In the end, the judges scored it 98-90, 100-90, 98-90, earning Bolotniks the win and seeing him keep hold of his WBO European light-heavyweight title in the process.

Bolotniks will take on the winner of the other semi-final, which sees Liam Conroy meet Serge Michel at Production Park Studios in Wakefield, England on Wednesday.

Elsewhere on that card, Tyrone McKenna takes on Ohara Davies in the super-lightweight semi-final, and Jazza Dickens faces Ryan Walsh in the featherweight final.

Hosea Burton (25-1, 11 KOs) faces Ricards Bolotniks (16-5-1, 7 KOs) in Riga on Saturday, live on IFL TV, with a place in the final of the Golden Contract light-heavyweight tournament at stake.

Burton reached the semi-final thanks to a dominant unanimous decision win over Bob Ajisafe during the quarter-final in December, while Bolotniks picked up an incredible first round stoppage win against Steven Ward, winning the WBO European light-heavyweight title in the process.

The winner of this fight will take on the winner of the other semi-final, which sees Liam Conroy meet Serge Michel at Production Park Studios in Wakefield, England on Wednesday.

The bookies have struggled to split the two men in the build-up to the fight, and Burton feels this fight is the one that matters most.

Burton said: “This should have been the final. It’s a shame that it’s happening now as Bolotniks will be going out in the semi-final. He looked impressive against Steven Ward, but I think that was a bad Ward on that night and the win flattered Bolotniks.

“He’s a decent fighter but he won’t beat me. Winning this tournament will mean everything to me and an opportunity like this is something I’ve been wanting for a while.

“I enjoyed a little rest after my last training camp, but then I got bored sat at home so I’ve been training for a long time now. I was a little bit worried that the competition may not end because of the pandemic, but now that it’s here I’m over the moon.

“I’m not too sure who will win the other semi-final to be honest. Conroy is the bigger man, but Michel may be the more skilled. Both can punch a little, but both have suspect chins too, so it will be interesting. No matter who it is, I’ll beat them.”

Ricards Bolotniks has fired back at Hosea Burton ahead of their #GoldenContract light-heavyweight semi-final showdown – telling him to prepare for a ‘gladiatorial battle.’

Burton made a bold prediction by suggesting he could stop Bolotniks in the first round, but Bolotniks has dismissed those claims and told his rival that he wants a full-blown war over the course of the fight.

Bolotniks said: “I do not agree with Burton saying it will be over in one round. I want a real fight, a real war, and I want a full gladiatorial battle.

“I want to feel it through my whole body, through my hands and through all of my bones during this entire fight. I will show everything that I am capable of. I treat each of my rivals with respect, and I will beat Burton with great respect.

“When the fight was cancelled in March it was a terrible feeling, but we are fighters and need to accept what life throws at us and go forward. I’ve trained hard and I’m ready for this fight.”

Ricards Bolotniks admits that fighting in Latvia will give him a huge advantage ahead of his highly-anticipated #GoldenContract light-heavyweight semi-final against Hosea Burton.

Bolotniks has won 14 of his 15 fights to take place in Latvia, and he feels it makes him the clear favourite ahead of the battle with Burton.

Bolotniks said: “At home everything is easy! I am very grateful to MTK Global and LNK Boxing for making this fight happen on Latvian soil.

“Of course the support of the fans will help, but even more important – the support of my wife Alina! I was ready for any of the remaining fighters, so we are more happy that the draw finally happened.

“Burton is a tall fighter with a strong punch, I had a gut feeling and told my wife before the draw that I will face Burton in the semi-finals.

“He is a good technical fighter with long reach, and it’s another test that life is giving me, and a test that I have to pass.”

Hosea Burton isn’t letting his trip to Latvia deter him ahead of his #GoldenContract semi-final with Ricards Bolotniks – insisting that his opponent may struggle to even get through round one.

Bolotniks earned a first round stoppage win over Steven Ward in the quarter-final, displaying plenty of aggression in the opening three minutes, but Burton feels that fighting style could work in his favour.

Burton said: “It is what it is. Me and Bolotniks would have made a good final, but it’s a shame he’s got to go out in the semi-finals. I’m happy to know who I’m fighting.

“Unless I picked the Golden Ball I knew nobody would pick me and that I would have to go to Latvia. It being over there won’t make a difference for either of us, as nobody is going to get any help off anybody.

“It’s going to be an exciting fight. I know Bolotniks will come running forward, but the question is whether he will get through the first round. If he comes in with no respect he will pay for it big time.”

Burton vs. Bolotniks comes four days before the other semi-final, as Liam Conroy goes up against Serge Michel at Production Park Studios in Wakefield, England on September 30.