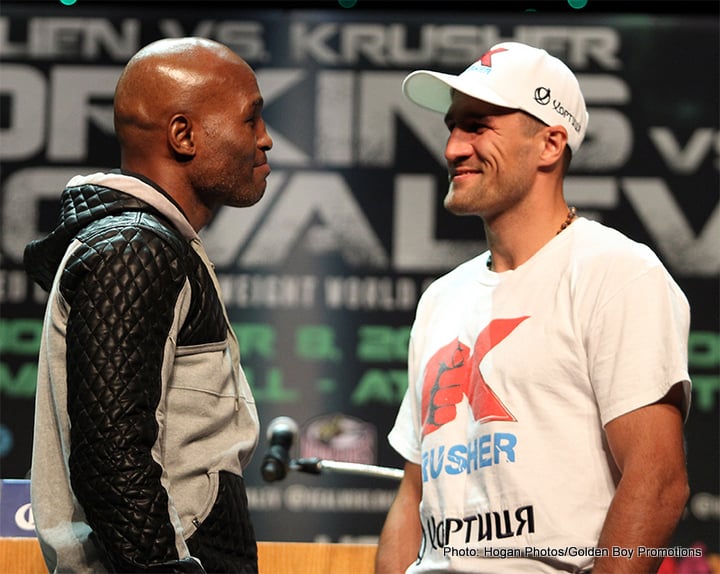 “When I hear or read or get asked a question like, ‘you didn’t have to take this fight, you could have taken a different fight,’ I think, have you paid attention to my career?

“This isn’t about being an athlete, a boxer or whatever it is. This is something separate. Me as a man, I’ve been there since 1965. I have been special ever since.

“When you’re dealing with the spirit, that I carry with me, from my personal life to here. All of that comes together in the ring. An opponent, he can be fast, slick or a puncher, you have to face all of these intangibles that I bring to the ring.

“I don’t mind putting my wits up against anyone’s wits today. I’m so calm and relaxed. I still have that hunger to prove myself.

“Psychological warfare, you will never win against me. Everyone on this side [points to Kovalev’s side of dais] knows you’re never going to win. I don’t care who’s sitting over there.

“When I step into that ring I’m at war with everybody.

“I have no secrets. I’m one of the cleanest athletes that has ever been in any sport. Remind yourself every now and then who you’re dealing with. Then you can say, ‘I asked him that 15 years ago.’

“It doesn’t disappoint me when I hear people say ‘He didn’t have to take this fight.’ What do you think? I’m a charity case? I’ve been wise to figure this out.

“Sergey wants to do what every fighter and athlete wants to do, put the best against the best. They want to fight the best. I’m not going to be in this game fighting nobodies.

“I know the ring like I know this building [Caesar’s Atlantic City], but that’s not because I’ve been here a bunch of times. It’s because I pay attention to everyone and everything. I believe at looking people in the eye and learning everything I need to know about them.

“I’m still calm and relaxed now, but I still have the hunger to prove myself. Sergey says he wants a fair fight. [To Sergey] You’re the Krusher, you make your own fair fight.

“John David Jackson says he knows everything there is to know about me. Sergey is the student. I’m not fighting John. But how can a teacher teach with credibility when the teacher has all F’s? How can a teacher teach a student to have all A’s when he has an F? I guarantee John did not show our fight to Sergey.”

“All roads lead to this fight. This is a huge fight in my career and in my life.

“November 8th on HBO in Atlantic City will be a great show and a really interesting fight. I hope that this fight will be very fair and honest.

“In the beginning of my career, I was ready to fight anywhere at anytime. No one knew me in America and I built my career from zero. I fought any place, any opponent.

“I only understand about 10 percent of what Hopkins says. He speaks in American English and slang. It’s probably a good thing because it doesn’t bother me.

“After he fights me, he can leave boxing and become a one man show in the theater or comedy. He is a great talker.

“It would be different if we fought in Russia and I could fully explain myself and what I want to say and he had what he was saying interpreted.

“The way someone explained to me what he said. He is saying interesting things.

“I understand that he is sure of himself 100 percent, and that is a good thing, but I am going to win on Saturday night.”

“I want to thank all the promoters for getting back together because that is the most important thing.

“I want to thank Sadam Ali and his team. They are good people. This is a sport. In the fight we are going to come to work and it will be a fight. After that we will go back to being friends again.

“You all know my style. I’m here to give the fans a great fight. Let’s put it all together and may the best man win.

“Now there isn’t much more to say. Lets leave it for Saturday night.”

“There’s not too much we can say about Bernard Hopkins that hasn’t already been said.

“This fight will put ‘The Alien’ in the Hall of Fame. ‘The Executioner’ is already in there. He is not only he oldest boxing champion he is the oldest champion in any sport. We can’t even reduce him to boxing any more, he’s no longer just ours.

“I’ve seen this man face punchers before. I’ve seen him face everything except for ‘fan man.’

“Come out and see one of the greatest athletes of all time. ‘The Executioner’, ‘The Alien’, ‘B-Hop’ or whatever your favorite segment was in his career.

“I don’t want anyone to declaw or defang Kovalev. I don’t want to hear it was this or that, or that the mind game of Bernard was too much for him. You all watch this kid. There’s no excuse for this man not to come out and do what he’s been doing.”

“It’s fight like these that keep boxing alive, with the veteran warrior and a young warrior willing to fight each other.

“The talking is done, the fight plan is together and every stone has been turned.”

“I want to thank Sergey for being a good person. It’s fights like these that keep boxing alive. He wants to take the old man’s title.

“It is a fight that people need to see in boxing. They could have chosen other fights. This is what boxing needs. I am respecting this man for what he’s accomplished.”

“This is the premiere event for the year in boxing. The beauty about this is that it could easily have been on pay-per-view, but its not, it’s live on HBO.

“It’s the biggest fight of the year and all of the parties involved stepped up to the plate and it is going to be a highly anticipated event.

“Bernard is a future Hall of Famer who is shattering records left and right. Talk about perseverance, never giving up and fighting for what’s right.

“You can go on and on about what a perfect example of an athlete he is. He eats, sleeps, and breathes boxing. Bernard Hopkins is in a class of his own. We are never going to see another Hopkins in our lifetime, that’s how special he is and I’m not just saying that because he knocked me out.

“There is something about Hopkins psychological game plan. It puts you in a trance. It caught me by surprise. That is what Hopkins is. We know he is physically strong, fast and agile, but here there is nobody like him.

“Having the privilege to step into the ring with Bernard Hopkins is an experience that is impossible to prepare for. How are you going to deal with his brain power, mind and his plan A, B, C?”

“Sergey will enter the ring with one belt and wants to leave with three. He has an electrifying presence in the ring and I have no doubt he is going to give us a show.

“These are two great fighters. Bernard is a great fighter. There is no other way to describe him. I know what this legacy means to him. Taking this fight at this point in his life proves that.

“Atlantic City is not out. This is a perfect example of ‘If you bring the best fights to Atlantic City the people are going to be interested.’ It’s been a little bit of a dry spell for us in Atlantic City. Maybe it’s an omen but Larry Hazzard was reappointed commissioner and we go this great championship fight right here on our doorstep.

“I want to thank the fighters. When you can get guys to fight that are taking chances and making fights happen that fans want to see, that is the best scenario possible for the sport.

“Bernard has been a fighter in Atlantic City for a long time, a lot longer than he probably wants to remember. I commend him for taking this fight and bringing it to Atlantic City.”

“You don’t want to say the opening fight is going to steal the show. This kind of fight is experience versus youth.

“In the welterweight division any fight you can make is a good fight because it always leads to something great. We look forward to making fights like this.

“Luis Carlos Abregu is probably the best puncher in the welterweight division.

“It is wonderful that this is taking place in Atlantic City. This is probably the most anticipated boxing event for the entire year. It is a fight that really didn’t have to take place. These two guys could have danced around each other for another year ago, but because they consider themselves the best and in boxing the best should be fighting the best.”

HBO Sports presents the fall’s most-anticipated boxing event when WORLD CHAMPIONSHIP BOXING: BERNARD HOPKINS VS. SERGEY KOVALEV AND SADAM ALI VS. LUIS CARLOS ABREGU is seen SATURDAY, NOV. 8 at 10:45 p.m. (live ET/tape-delayed PT) from historic Boardwalk Hall in Atlantic City, exclusively on HBO. The HBO Sports team will be ringside for the event, which will be available in HDTV, closed-captioned for the hearing-impaired and presented in Spanish on HBO Latino.

The most accomplished light heavyweights in boxing take the spotlight when Bernard Hopkins (55-6-2, 32 KOs) meets Sergey Kovalev (25-0-1, 23 KOs) in a red-hot title unification fight scheduled for 12 rounds. The bout marks Hopkins’ 22nd appearance on HBO and Kovalev’s fifth appearance on the network in a 15-month span.

Philadelphia native Hopkins, who continues to defy the odds and the critics, enters the ring two months shy of his 50th birthday as the oldest champion in history. Widely considered one of the greatest middleweights ever, with victories over Oscar de la Hoya, Roy Jones, Jr., Antonio Tarver and Felix Trinidad, he unified middleweight titles when he defeated Beibut Shumenov by split decision in April. As the more traditional boxer, Hopkins will seek to use ring generalship and veteran savvy to again unify titles.

Sergey “Krusher” Kovalev, 31, is one of the most feared light heavyweights today. During his five years as a pro, only one opponent has lasted more than seven rounds against the heavy-handed Russian, who currently owns a nine-fight knockout streak. He will look to extend that run in Atlantic City, which has hosted his last two title defenses.

In the opening bout, Brooklyn’s Sadam Ali (20-0, 12 KOs) squares off against Argentina’s Luis Carlos Abregu (36-1, 29 KOs) in a ten-round welterweight fight. The undefeated Ali, 26, is a rising prospect making his third ring appearance of 2014. Abregu, 30, knocked out the undefeated Thomas Dulorme in his last appearance on HBO in 2012. He holds an impressive seven-fight winning streak since his only loss, against former welterweight champion Timothy Bradley. The winner will likely enter the discussion of world title contenders in this competitive division.