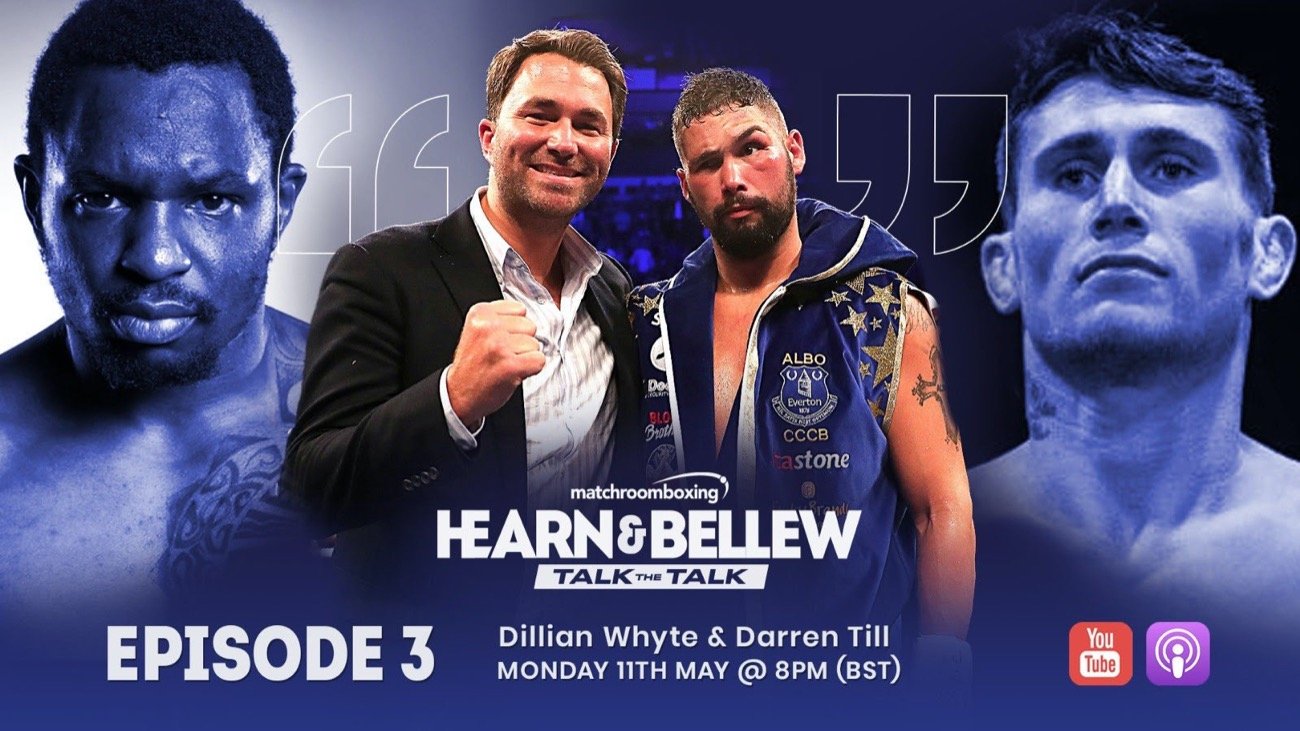 Eddie Hearn and Tony Bellew are back with the fourth instalment of our ‘Talk the Talk’ series, which airs tonight at 7pm (BST) on the Matchroom Boxing YouTube channel.

This week the duo are joined by big-hitters from the footballing world as Champions League winner and Sky Sports Football pundit Jamie Carragher, Watford F.C. captain Troy Deeney and Fleetwood Town F.C manager Joey Barton debate ‘Project Restart’ – the Premier League’s attempts to resume the season that was interrupted by the coronavirus pandemic on March 13.

“We’re obviously planning our own return but football seems to have a range of hurdles to overcome in a short space of time before the restart,” said Hearn. “It’s another fascinating chat this time with Jamie, Joey and Troy to get some real insight from those involved in the game.”

“It’s another great episode,” added Bellew. “Joey is a clever individual. Troy’s got an inspiring story, I’ve admired him from afar from years and it’s always a pleasure to speak with my mate Carra.”

Dillian Whyte and Darren Till join for boxing and MMA chat

Eddie Hearn and Tony Bellew are back with the third instalment of our ‘Talk the Talk’ series, which airs tonight at 8pm (BST) on the Matchroom Boxing YouTube channel.

The duo return for another knockout episode starring Heavyweight contender Dillian Whyte and Liverpool’s UFC star Darren ‘The Gorilla’ Till.

Speaking from his Portugal training camp, Whyte discusses the possibility of fighting Alexander Povetkin behind closed doors and analyses Francis Ngannou’s victory at UFC 249 as a potential crossover clash down the line continues to gain momentum.

Following a Twitter back and forth in the week, Till accepted Hearn’s open invite to come on the show and recap the return of MMA, reveal his proposed next outing and shake on a bet for the undisputed fight between Anthony Joshua and Tyson Fury.

Amongst a host of other topics, both men also discussed cutting weight in their respective sports and what can be done to improve fighter safety.

“It’s another unbelievable show,” said Hearn. “I’ve never spoke with Darren before, he calls me out on social media from time to time but it was fascinating to chat. Dillian’s always ready to go and provides great value in the latest Talk The Talk.”

“Darren and Dillian are two good guys who just want to fight, that’s the most important thing in combat sports and that shines through in episode 3,” added Bellew.

Bisping and Helwani join for MMA and Boxing chat

Bellew and Bisping traded verbal jabs over a potential fight back in 2017 and come together for the first time to discuss the rumours, Bisping’s rise to becoming the first Brit to land UFC World honours, which fighters have what it takes to succeed in the opposing sport and much more.

“The first episode went really well, the numbers were good and there were loads of headlines from it,” said Hearn. “This is a fascinating chat with Bisping and Ariel as we talk about the two disciplines.”

“The MMA world is crazy, I’ve been a massive fan for years,” said Bellew. “It was great to speak with the best UFC fighter to come out of the UK in Michael Bisping.”