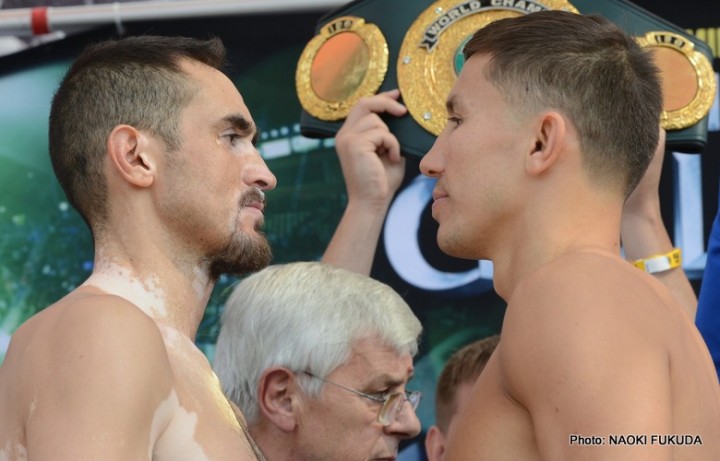 In two short years, middleweight titleholder Gennady Golovkin has built a powerhouse reputation with East Coast fans thanks to an intriguing array of skills, highlighted by stunning knockout power, becoming perhaps the sport’s most feared fighter.

Now, he takes aim at the West Coast in his first Los Angeles-area prizefight when WORLD CHAMPIONSHIP BOXING: GENNADY GOLOVKIN VS. MARCO ANTONIO RUBIO AND NONITO DONAIRE VS. NICHOLAS WALTERS is seen SATURDAY, OCT. 18 at 10:00 p.m. ET/PT from StubHub Center in Carson, Cal., exclusively on HBO. The HBO Sports team will be ringside for the event, which will be available in HDTV, closed-captioned for the hearing-impaired and presented in Spanish on HBO Latino.

In his 12th middleweight crown defense, Gennady Golovkin (30-0, 27 KOs), originally from Karaganda, Kazakhstan, and now training at Big Bear, Cal., meets the dangerous Marco Antonio Rubio (59-6-1, 51 KOs) of Torreon, Mexico in a scheduled 12-round contest. Currently boasting a knockout victory streak of 17, Golovkin has taken the boxing world by storm with an extraordinary knockout-to-win ratio of 90%, and no opponent has gone the distance with him since Nov. 2008. He’s trained by the highly regarded Abel Sanchez.

Rubio, who trains in Oxnard, Cal. with the accomplished Robert Garcia, has never backed away from a challenge. A veteran of bouts with Julio Cesar Chavez Jr., Kelly Pavlik, David Lemieux, Frankie Randall and Kassim Ouma, he brings a wealth of major-league experience into the ring.

Opening the telecast is a compelling featherweight title matchup pitting Nonito Donaire (33-2, 21 KOs) against Nicholas Walters (24-0, 20 KOs) in a 12-round battle. A native of the Philippines who’s currently based in San Leandro, Cal., Donaire was the 2012 BWAA Fighter of the Year. Having earned world titles in four different weight classes, he now puts his new 126-pound crown on the line. Walters, who hails from Jamaica, is widely viewed as a talented fighter.

Immediately after the live boxing action from Carson, HBO Sports will present the one-episode special “24/7 Hopkins/Kovalev” at approximately 12:15 a.m.

At 12:45 a.m. the HBO Latino service will present a doubleheader of HBO Latino Boxing action from StubHub Center. Headlining a 10-round light heavyweight battle will be Edwin Rodriguez and Azea Augustama and in the opening bout it’s a 10-round middleweight clash with Marcos Reyes squaring off with Abie Han.