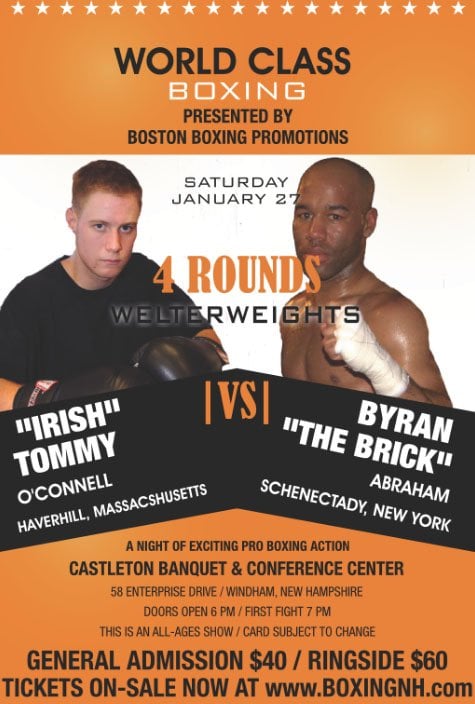 Boston Boxing Promotions has announced the next fight signed for the professional boxing event to be held Saturday, January 27, 2018 at the Castleton Banquet & Conference Center in Windham, New Hampshire. In a four-round welterweight bout, Haverhill, Massachusetts’ “Irish” Tommy O’Connell will make his pro boxing debut against Schenectady, New York’s Bryan “The Brick” Abraham.

O’Connell is a former standout on the basketball court at North Andover High School and Roger Williams University in Rhode Island where he graduated with a degree in marketing and a minor in psychology. While in college, he took up boxing as a hobby and for the past six years has been active on the New England amateur scene. In 2013 he was a Police Athletic League finalist and 2014 a Golden Gloves finalist.

“I’ve always loved to compete in sports,” said O’Connell. “After two dozen amateur fights I feel that now’s the time to take it to the next level, and I can’t wait to turn pro on January 27th.”

Fighting is in O’Connell’s blood as his grandfather, Homer Rogers, was once a New England Golden Gloves Champion. His hometown of Haverhill has also seen its share of accomplished professional fighters including the late Jeff Fraza, who was featured on the first two seasons of NBC’s “The Contender” series hosted by Sylvester Stallone and Sugar Ray Leonard.

Standing across the ring from O’Connell on January 27th will be Schenectady, New York’s Bryan “The Brick” Abraham. Abraham, a far more seasoned pro boxer than O’Connell, is a heavy handed welterweight that has six knockouts in all six of his professional boxing wins. Furthermore, three of those big knockouts came against previously undefeated opponents including Connecticut’s Dominic Desanto and New Bedford’s Johnathan Vazquez, who had a combined record of 9-0 before suffering devastating knockouts by Abraham in the first and third rounds of their respective fights.

“I can’t wait to welcome Tommy O’Connell to the professional ranks,” said Bryan Abraham. “He’s about to learn the difference between amateur and professional boxing – smaller gloves, no headgear and my hands that I call my ‘bricks’ knocking him upside his head and making him reconsider why he’s doing this.”

Tickets for the January 27, 2018 World Class Boxing event in Windham, NH are on sale now at www.BoxingNH.com.

Boston Boxing Promotions was founded in 2013 and is dedicated to the resurgence of professional boxing at the regional level, particularly in the New England area. Since that time, it has presented professional boxing events in places like Boston, Cape Cod and New Bedford. To learn more about the promotion, you can follow them on Twitter @BostonProBoxing, join the promotion’s official Facebook page “Boston Boxing Promotions,” and visit the promotion’s website www.BostonBoxingPromotions.com.