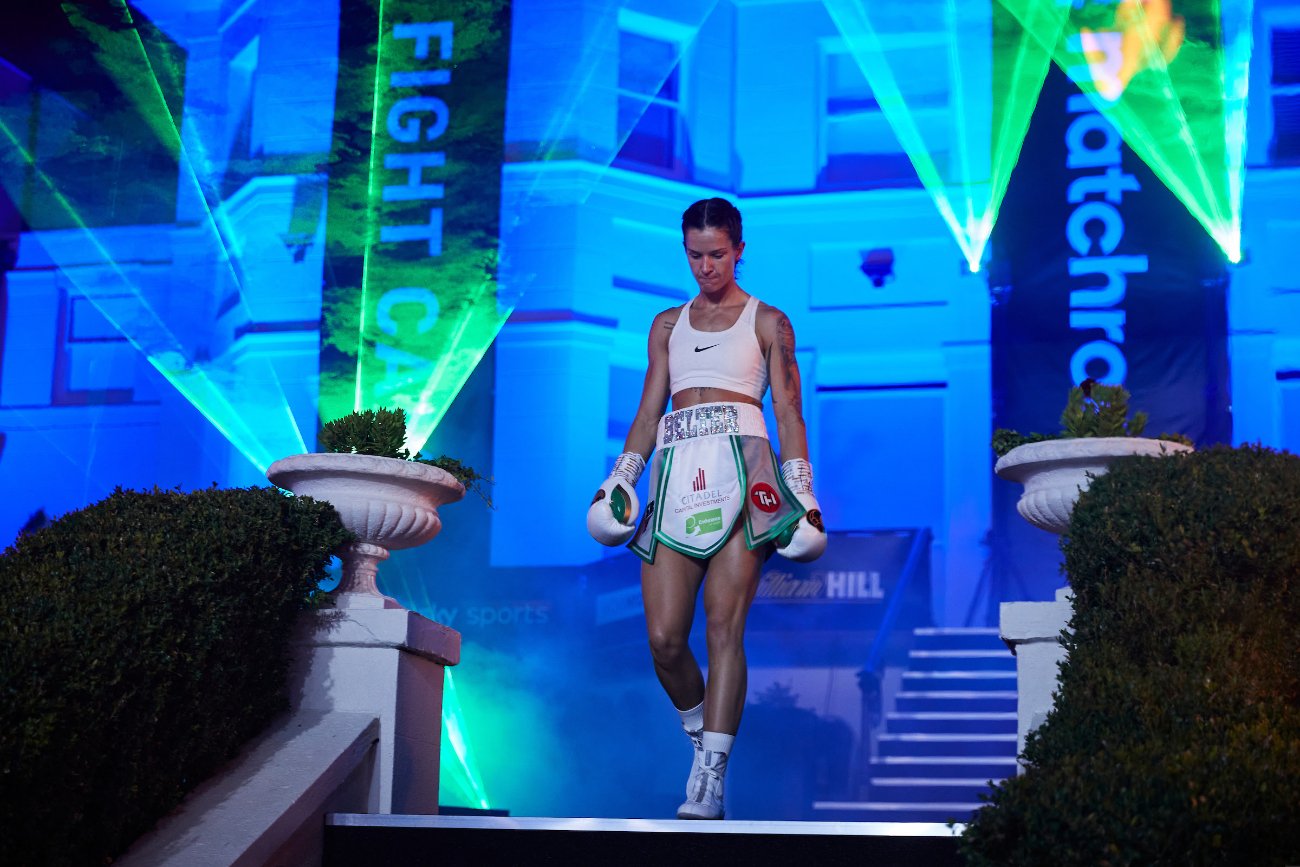 Katharina Thanderz (13-0-2 KOs) and Terri Harper (10-0-1-5KOs) both made weight today, as the Norwegian challenger looks to claim the WBC and IBO World Super Featherweight titles from the British champion tomorrow night at The SSE Arena, Wembley in London.

Thanderz, the current WBC interim champion, believes the fight has come at the perfect time and has vowed to do everything she can to bring the titles home.

“I’m in my best shape I have ever been in, both physically and mentally. This fight has come at the perfect time for me.

“Harper is a great boxer. Very fast, strong, skilled, young and hungry. I have not overlooked her. I am expecting the very best version of her.

“I just hope for a fair decision. The fact there is no crowd noise should mean the judges are not influenced. But this is something I can’t worry about too much, as the judges decisions are totally out of my control.

“It would be a hugely emotional moment for me and my team when we are victorious. This means everything to me, and I will win by any means necessary.”

Promoter Nisse Sauerland spoke on Thanderz bid to become unified world champion, echoing that this was his fighters time.

“This is a huge opportunity for Katharina and one we believe she is ready to take. The way she defeated Danila Ramos last time out, despite a terrible cut from a clash of heads is what champions do, they dig deep when they have to. She is a real warrior with a clear goal to become world champion and stay there. We can’t wait to see her fulfil that goal on Saturday night.”

Terri Harper says she has made a number of improvements following her thrilling split decision draw with Liverpool’s Natasha Jonas at the top of the bill on Fight Camp Week 2 back in August.

Harper retained her WBC and IBO Super-Featherweight World Titles after ten rounds of all out action in Essex, but the Denaby star was left disappointed with her performance.

‘Belter’ (10-0-1, 5 KOs) puts her titles on the line against WBC Mandatory Challenger Katharina Thanderz (13-0, 2 KOs) at The SSE Arena, Wembley on Saturday November 14, live on Sky Sports and DAZN.

The 24-year-old is open to a rematch with former Team GB standout Jonas but insists that all of her attention is on the job at hand against undefeated Spanish-Norwegian Thanderz next week.

“I just fight who I’m told to fight,” said Harper. “Thanderz was called as mandatory so that’s it. I’ve had my eye on her a good few months, maybe a year as a potential opponent so it’s not like she’s just popped out of nowhere.

“I learnt a lot after my last fight in many ways and I do want that rematch with Tasha down the line and also unifications, but I have a proven and deserving mandatory challenger to contend with first before we even look at those options – this is a proper fight and one I’m not overlooking.

“Previously I used to take it to heart when people called me out, but it shows I’m doing something right and have something they all want – the green and gold belt, but it’s one fight at a time.

“We’ve made changes from the last camp, including bringing a new S&C coach onboard. It’s really opened my eyes to a few areas I was perhaps missing before, the improvements we’ve made since the summer are already starting to show.

“You’ll see my boxing skills shine through, I’ll set the pace, be disciplined in there and retain my titles.”

Katharina Thanderz says she has seen weaknesses in Terri Harper’s game that she will exploit when they clash for the WBC and IBO Super-Featherweight World Titles at The SSE Arena, Wembley on Saturday November 14, live on Sky Sports and DAZN.

Unbeaten in thirteen professional contests, the former European and WBC International Champion got her first taste of World Title action last time out in November 2019 when she battled past Danila Ramos to claim the interim WBC Super-Featherweight crown.

Thanderz aims to follow in the footsteps of compatriot Cecilia Brækhus, the former long-reigning Undisputed 147lbs champion, who is considered one of the greatest female boxers of all time, and the 32-year-old plans on kicking off her road to Undisputed by dethroning rising star Harper in London.

“This is my moment, my fight, the night my whole career has lined up for,” said Thanderz. “To fight against such a competitor for a World Title unification, it’s the fight every fighter dreams of!

“My last fight was a hard one where I had to bite down on the gum shield, but this fight will be an even greater test. I came through in my last fight and had my hand raised, I’m confident that will happen again against Terri.

“After that fight, I called for Terri Harper, I’ve been studying her for a long time but I know she will have been studying for me. I’ve seen weaknesses in her game that I have been working on in training, I’ve put in extra hours to work on a specific game plan and now I just can’t wait to get in there with Terri and put into practice what we’ve worked on.

“Everything for this fight has been right. My training camp, my preparation could not have gone better. From diet and nutrition, physical training, sparring – my team has left no stone unturned; I am determined not to waste this opportunity. “We will entertain in this fight, we are two fighters that love to fight and have trained hard and prepared well. I can’t wait.”

Women’s boxing has never been in a stronger position, with World Title fights regularly featuring on some of the biggest shows around the globe, and Thanderz is pleased to be sharing a card with Ireland’s Undisputed Lightweight queen Katie Taylor, who has been instrumental in building the sport in recent years.

“This card is a great one to be a part of. What is happening for sport here is amazing, it shows the evolution of the sport of boxing and coming away from this fight night with the World Title around my waist will make it the biggest and most special night in my career.

“Fighting this year is important. After everything that has happened with the pandemic, we’ve seen how much we need sport, the fans need it, the fighters, sports stars we all need it. Something to deliver excitement, passion and something that gives fans a reason to cheer and shout!”