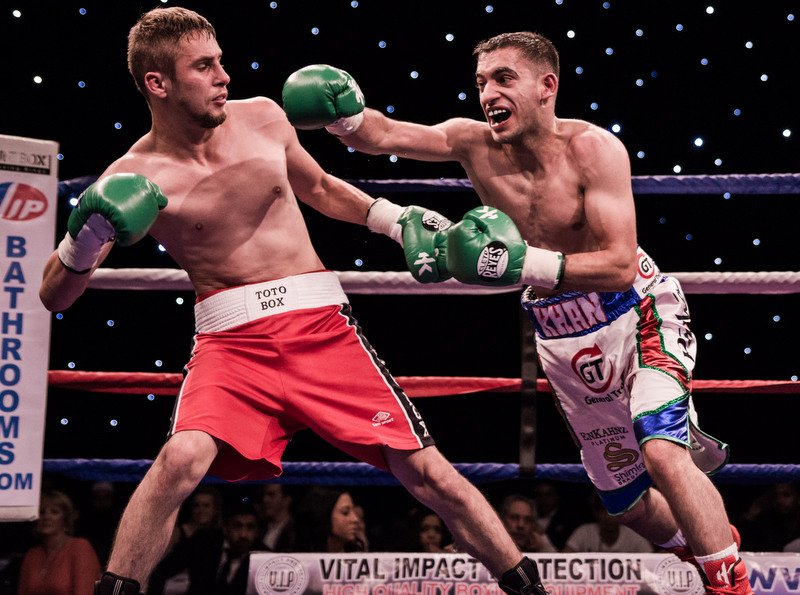 Bolton sensation Haroon Khan continued his unbeaten run with an assured victory over Csaba Kovacs at the Reebok Stadium.

The 23-year-old battled tough Hungarian Kovacs in his hometown at the weekend, taking his stretch of wins to five since turning professional last year, as he conclusively won 60-55 on points over 6 rounds.

Khan’s superior speed and ringcraft was evident from the start, as he took it to the bigger man, whilst catching him with left hooks as he came in.

This was the first time super-flyweight Khan had boxed six-rounds, yet the young dynamo looked convincing and calm throughout, showing he was able to maintain a longer distance as he steps into a new phase in his blossoming career.

“I felt good in there and was very pleased to get another win under my belt,” said Haroon. “This was my first six-rounder and with the change of opponent at the last moment I’m happy with how things went. Kovacs was very tough and he caught me with a couple of good shots but I showed I was able to take them and come back even harder. I needed a fight like this and it’s only going to bring me on as a fighter – I’ve learnt so much from this fight,” he said.

Khan is set to be out again in September and will know what to expect when he goes into his next bout.

“This fight has shown me what I’m going to be up against for future fights over six rounds and beyond. It’s about pacing yourself, picking your shots and I know for my next fight I’ll be even better because I’ll know what’s coming,” said Khan.

“I’m going to observe Ramadan over the coming weeks and I hope to be out again in September. In the meantime, I’ll be ticking away in the gym and looking to improve mistakes I felt I made in this fight with my trainer Oliver Harrison,” he said.

Older sibling Amir Khan was ringside on Saturday night and will be looking to share his knowledge, as a former unified world champion, with the exciting young prospect.

“Haroon has all the tools to do really well and go very far in the sport,” said Amir. “I thought he did excellent getting the win but I’ll definitely be in the gym with him giving some pointers. This was the first time he has done six rounds and the more rounds he gets under his belt the more it will help him.

“There are a few changes I would like to see him implement in his approach, with him using his boxing skills a bit more because he has all the weaponry he needs,” he said.