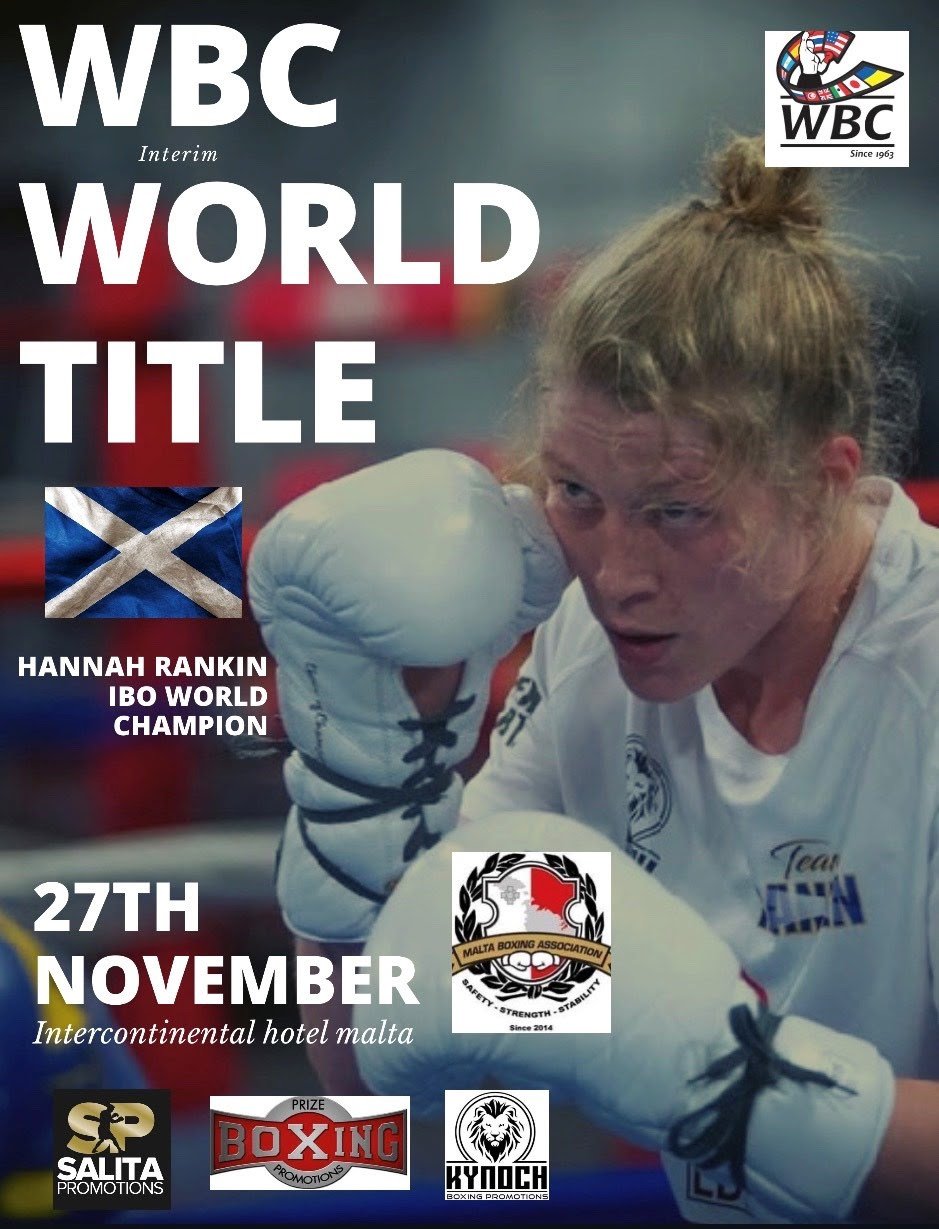 A well-known celebrity athlete in the UK where she headlines sold-out shows, Rankin is already the first Scottish woman in history to win a boxing world title after she captured the IBO World Super Welterweight Championship with a 10-round decision over Sarah Curran last June. Although she is a natural 154-lb fighter, the fearless Rankin has twice gone up in weight to face two of female boxing’s biggest names in Claressa Shields and Alicia Napoleon. She also previously held the WBC Silver Middleweight title in addition to her world championship.

“I’m excited to be fighting for another world title in my own weight class,” said Rankin. “I know Patricia is unbeaten and in Europe many consider her to be a very, very good fighter. I am improving with every fight and I look forward to once again testing myself, as true fighters should, and becoming WBC interim world champion.”

Rankin’s co-manager, Sam Kynoch of Kynoch Boxing (along with Mark Taffet), says he’s pleased with the opportunity for his fighter.

“I am delighted that Hannah will have the opportunity to lift the WBC Interim World Title on 27th November. Having held the WBC Silver Title at Middleweight it has always been a goal for Hannah to land a WBC World Title. The international exposure which Hannah will obtain, by virtue of competing at this prestigious event in Malta, is an added bonus.”

Rankin’s promoter, Dmitriy Salita, says the best is still yet to come for Rankin, who turned pro a short two years ago.

Read:  Ja’Rico O’Quinn vs. Saul Sanchez on Sept.24th on ShoBox

“Hannah Rankin is getting better with each fight and training camp,” said Salita. “I believe she is one of the best fighters in the junior middleweight division. She will have a chance to win another world championship against the undefeated and skilled Patricia Berghul of Sweden. I look forward to this great match-up.

Prince Ranch Boxing’s undefeated super bantamweight prospect, Raeese “The Beast” Aleem (14-0, 8 KOs), will return to the ring on Saturday, October 26, from Santander Arena in Reading, Pa, against Saul Eduardo Hernandez (14-14, 9 KOs). The 10-round bout will take place off TV on the undercard of Erickson Lubin vs Nathaniel Gallimore.

“I am looking to make a statement to prove I’m ready to step in competition,” said Aleem, who is promoted by Marshall Kauffman’s Kings Promotions. “I have been grinding, I have been working hard, and now I have a great chance to make an impression on the boxing world with a memorable performance. I know there will be a lot of important boxing executives who will be in attendance, so I going to put on the type of show that will make Showtime want to put me on television.”

“Aleem is a tremendous fighter, who has all the tools to be a world champion,” said Greg Hannley of Prince Ranch Boxing, Aleem’s manager. “He’s great in many areas of his game and are very confident in Aleem’s ability to make an impact on the entire super-bantamweight division. We expect him to end the year strong and follow it up with a big 2020.”

Aleem defeated unbeaten fighter Marcus Bates in 2018 and has followed up with impressive wins against tough experienced opponents. Aleem is a prospect on the rise who is showing that he is ready to contend.

“I want to prove that I am the best super bantamweight in the division,” Aleem continued. “Fighting the best available opponents in the division is what I’m seeking. I’m ready to take may career to the next level.”