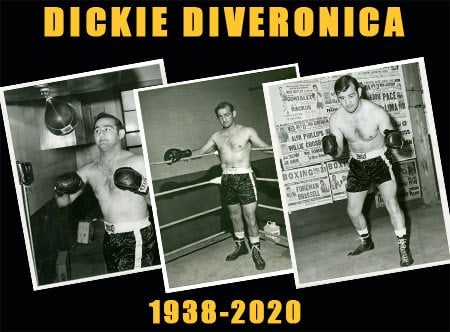 “Dickie DiVeronica was as tough as they come and, with his crowd-pleasing style, made Canastota proud every time he stepped into the ring,” said Hall of Fame Executive Director Edward Brophy. “He was an integral part of Canastota’s long and storied boxing history, which led the village to establish the International Boxing Hall of Fame to honor the entire sport. The Hall of Fame joins Canastota and the boxing community in mourning the loss of one of our own.”

Born January 26, 1938, DiVeronica was a standout athlete, excelling in football and wrestling at Canastota High School. He attended Cornell University and, after his freshman year, left the Ithaca, NY campus to pursue a career in the ring after watching Carmen Basilio prepare for his first bout with Sugar Ray Robinson.

DiVeronica holds wins over Tommy Tibbs, Jay Fullmer and Pete Toro and provided spirited efforts against Emile Griffith (TKO by 8) and “Gypsy” Joe Harris (L 10). Known as a cagey, aggressive fighter, he was managed by Joe Netro and Johnny DeJohn and trained with Hall of Famer Angelo Dundee in Miami, FL.

In 2019, DiVeronica became a member of the New York State Boxing Hall of Fame, which recognized him for his career achievements as one of New York State’s professional boxers.

The International Boxing Hall of Fame remembers the life and accomplishments of Dickie DiVeronica.