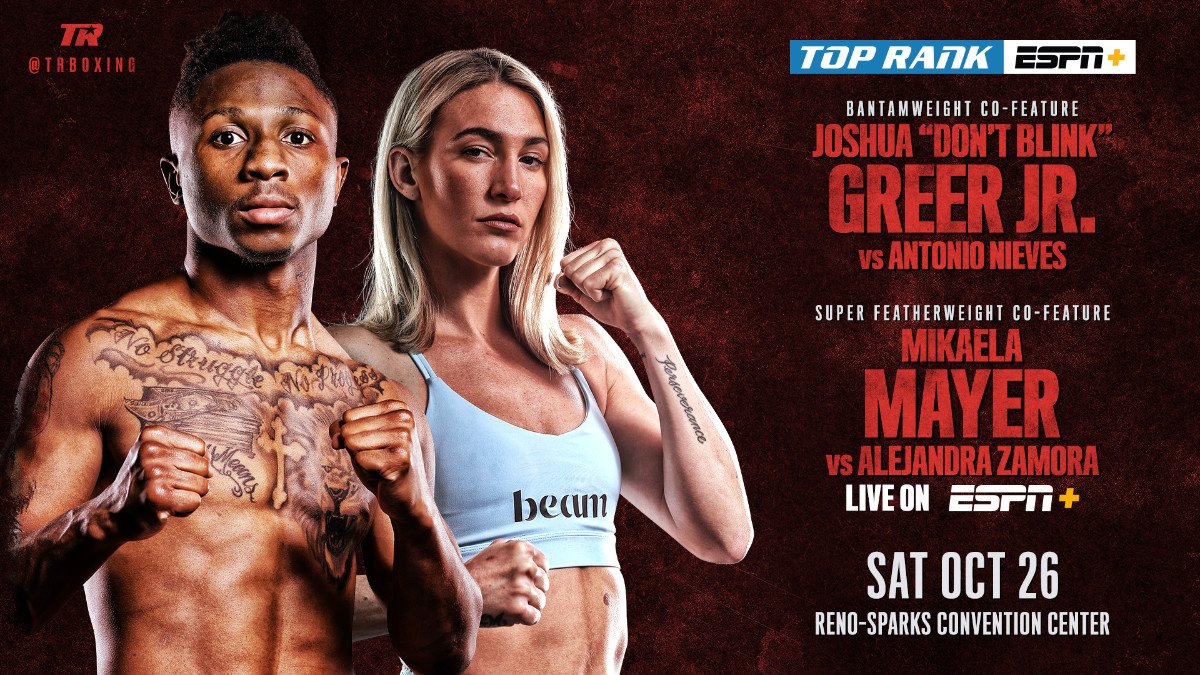 The man of many nicknames and one of the faces of female boxing will fight in co-feature bouts before Shakur Stevenson takes on Joet Gonzalez for the vacant WBO featherweight world title Saturday, October 26 at Reno-Sparks Convention Center.

In the other co-feature, Mikaela Mayer will make the third defense of her NABF super featherweight title against Alejandra Zamora in a 10-rounder.

“Joshua and Mikaela are two of the most charismatic young fighters in boxing,” said Top Rank chairman Bob Arum. “Having them on the card in tough fights, along with a great championship bout in Stevenson-Gonzalez, is a bonus for Reno fight fans and everyone watching on ESPN+.”

Greer (21-1-1, 12 KOs), the showman from Chicago, progressed from prospect to contender in the past year, winning four bouts since signing with Top Rank last September. His last two bouts — a close decision over Nikolai Potapov and a knockout of Giovanni Escaner — were televised on ESPN, leading Greer to coin himself “Mr. ESPN.” He is currently ranked No. 2 by the IBF, and if he beats Nieves, he could be in line for a world title opportunity in 2020. Greer complements his in-ring acumen with one-of-a-kind flair. Before each fight, he has a custom pillow made, which he unveils after knocking out his opponent. He is 10-0 with eight knockouts since debuting the “Night Night” pillow concept before his March 2017 knockout over James Smith.

Nieves (19-2-2, 11 KOs), from Cleveland, Ohio, is a professional loan officer by day and a longtime contender who won the NABO bantamweight title in June 2016. He lost the belt via split decision to Potapov the following year, then dropped down to super flyweight for a world title opportunity against pound-for-pound great Naoya Inoue. Nieves was stopped in six rounds by Inoue, and he has won two in a row by stoppage since returning as a bantamweight.

“I want to show everyone on October 26 what I’ve been working on. I’m only getting better. Every fight is a learning experience, and I am going to show Antonio Nieves what I’m about,” Greer said. “The knockout didn’t come in my last fight, but it’s all part of the game. I’m bringing back the pillow, and after I beat Nieves, I will be Mr. ESPN+.”

“My primary goal is to become a world champion,” Nieves said. “Joshua Greer Jr. is ranked second by one of the major sanctioning organizations and third by another. I am coming to Reno to beat him, take over his sport in the rankings and win a world championship in 2020.”

Mayer (11-0, 4 KOs) is a Los Angeles native who represented the United States at the 2016 Rio Olympics, and in a little more than two years as a pro, she has established herself as one of female boxing’s most popular attractions. She fought in Reno as an amateur and hopes a win over Zamora will lead to a world title shot in early 2020. Mayer last fought June 15 on the Tyson Fury-Tom Schwarz card in Las Vegas, where her decision win over Lizbeth Crespo drew more than 800,000 viewers on ESPN2. Zamora (7-3, 1 KO), from Argentina, is making her United States debut and has never been knocked out as a professional.

“It’s been a great eight-week camp for this fight, and everything is coming together,” Mayer said. “There’s been talk about my fighting style, and a lot of people have been impressed with how I’ve been working the body. Others want to see me box more on the outside. Nobody’s wrong, but this is just the process of becoming a well-rounded pro. I want to be great on the inside and the outside and that requires working both ways during my fights.

“I’m ready to put it all together, get this win October 26 and then get my title shot. It’s very cool to be the co-feature on the card of my Olympic teammate, Shakur Stevenson. You won’t want to miss this show.”