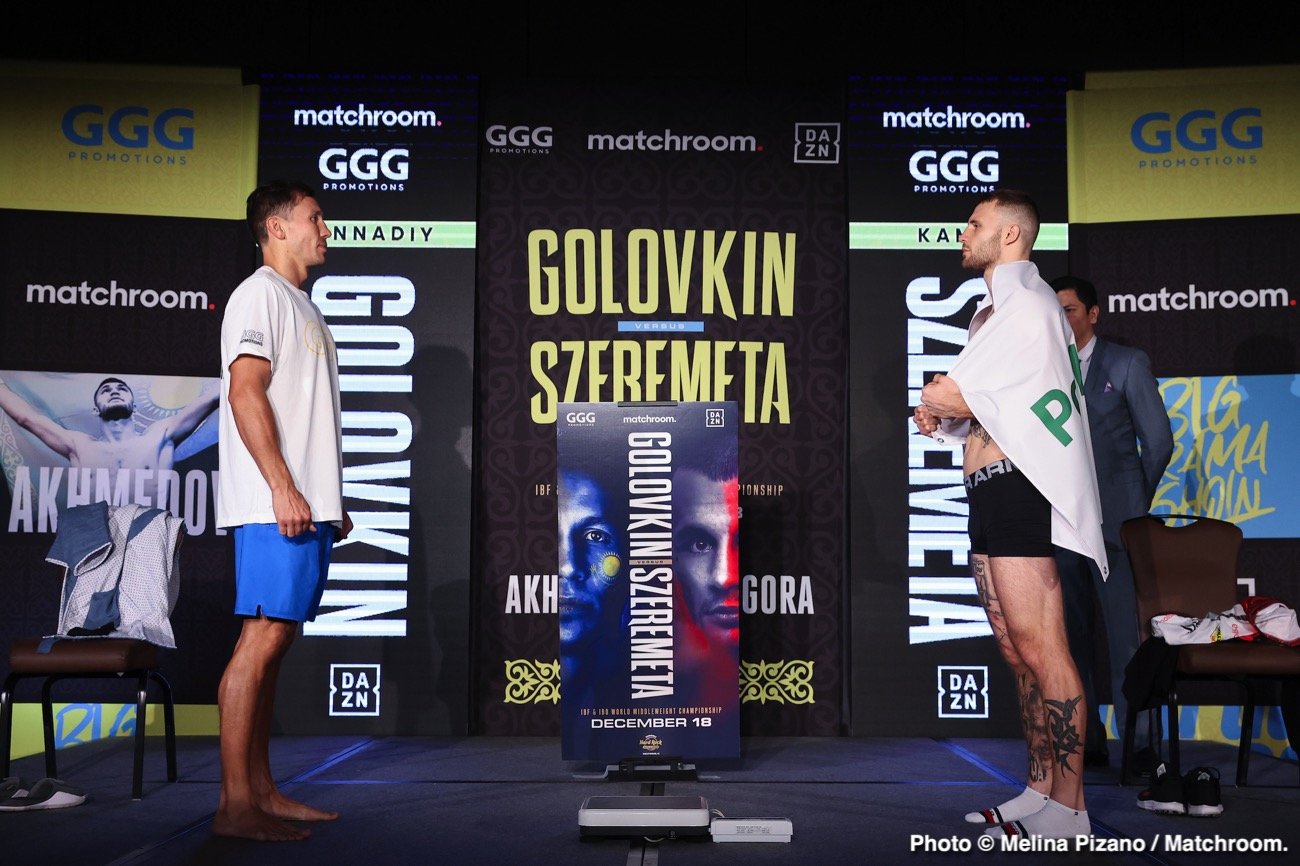 The two biggest fights are below along with props for each fight. The rest of the fights are listed below that.

Presented by GGG Promotions and Matchroom Boxing with Warriors Boxing, the Golovkin – Szeremeta world championship event will take place Friday, Dec. 18, behind closed doors at Hard Rock Live at Seminole Hard Rock Hotel & Casino in Hollywood, FL. It will be streamed live exclusively on DAZN beginning at 5 pm ET in over 200 countries and territories.

“Title fights have always been my goal, and together with the team, we became one step closer to the world title. I am confident in myself, my strength, and I can’t wait to step into the ring. The training camp was held at the highest level as always, and I am ready for the fight,” Akhmedov said.

“We have been training together for several years, and I have seen his progress with every fight and training camp. He is ready to fight for the world title, and I am glad that Ali represents GGGP at the turning point of his career. I am sure he will succeed,” Golovkin said.

“I know I will be in tough with Akhmedov, and I am ready for anything he wants to offer. We will see if he can do the same against me. Boston is about to see the start of its newest championship dynasty — mine,” Góngora said.

Akhmedov, who has won 75% of his fights by stoppage, returns to the ring, having won five of his last six-bout by knockout.

He captured the WBC International Silver super-middleweight title on June 8, 2019, by knocking out undefeated Marcus McDaniel in the third round.

He followed that up with his first title defense, a first-round stoppage of Andrew Hernandez, Oct. 5, 2019. Promoted by GGG Promotions, he has been in the same training camp as his mentor Gennadiy Golovkin for several years. 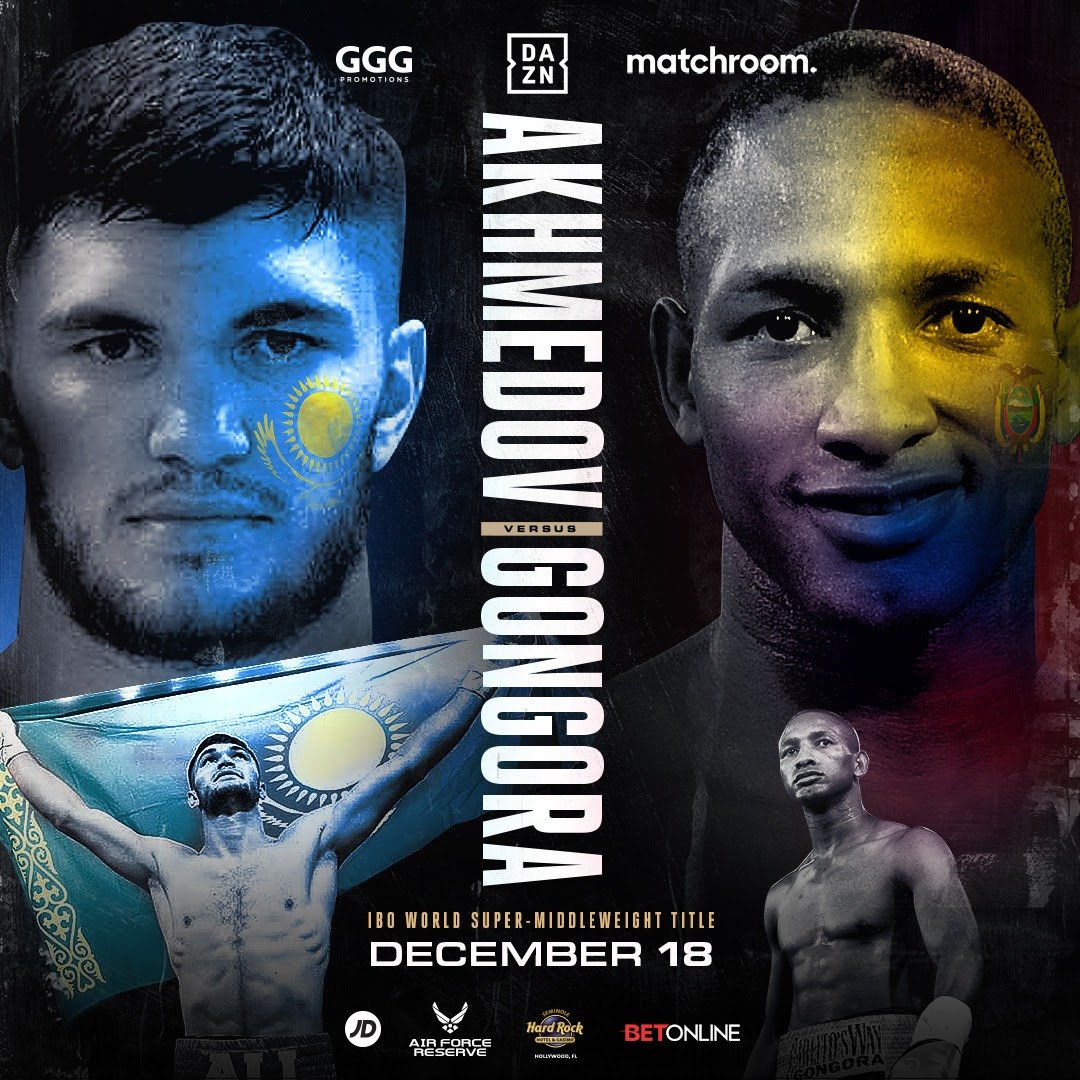 Góngora, who represented Ecuador in the 2008 and 2012 Olympics, reaching the quarterfinals in the 2008 summer games, has been training out of the Boston area throughout his professional career.

The Ecuadorian bomber’s skill set as a boxer-puncher and his victory by knockout ratio of 72% have made him one of the most avoided fighters. Now, in his first opportunity to fight on the international stage, he has vowed to make the most of this opportunity.

Choi’s 19th pro outing is her 18th World title fight. The two-weight World ruler will look to make a big statement to her star-studded rivals at Super-Featherweight on her American debut. Calista is looking to break her curse in World title outings, having challenged elite belts on six previous fights.

“From the time I started boxing, it was my dream to fight in the United States,” said Choi. “Now, it’s time to realize that dream. I am ready to show everyone a great boxing match. Through this match, I hope to gain respect and support from the world. I’m looking forward to my first match in the United States.”

Ryder is back in action for the first time since taking on Callum Smith for the WBA and WBC Diamond titles, running the champion close on his Liverpool home turf.

The Londoner will be looking to shake the rust off as he prepares for a big fight in the first quarter of 2021.

Reshat Mati (8-0 6 KOs) has been an exciting addition to the paid ranks, and the Albanian Bear fights for the ninth time as a pro. Unbeaten Californian 18-year-old Jalan Walker (6-0 6 KOs) fights on US soil for the first time against Rafael Reyes (18-11 14 KOs), having boxed in Mexico six times since his debut in November 2019.