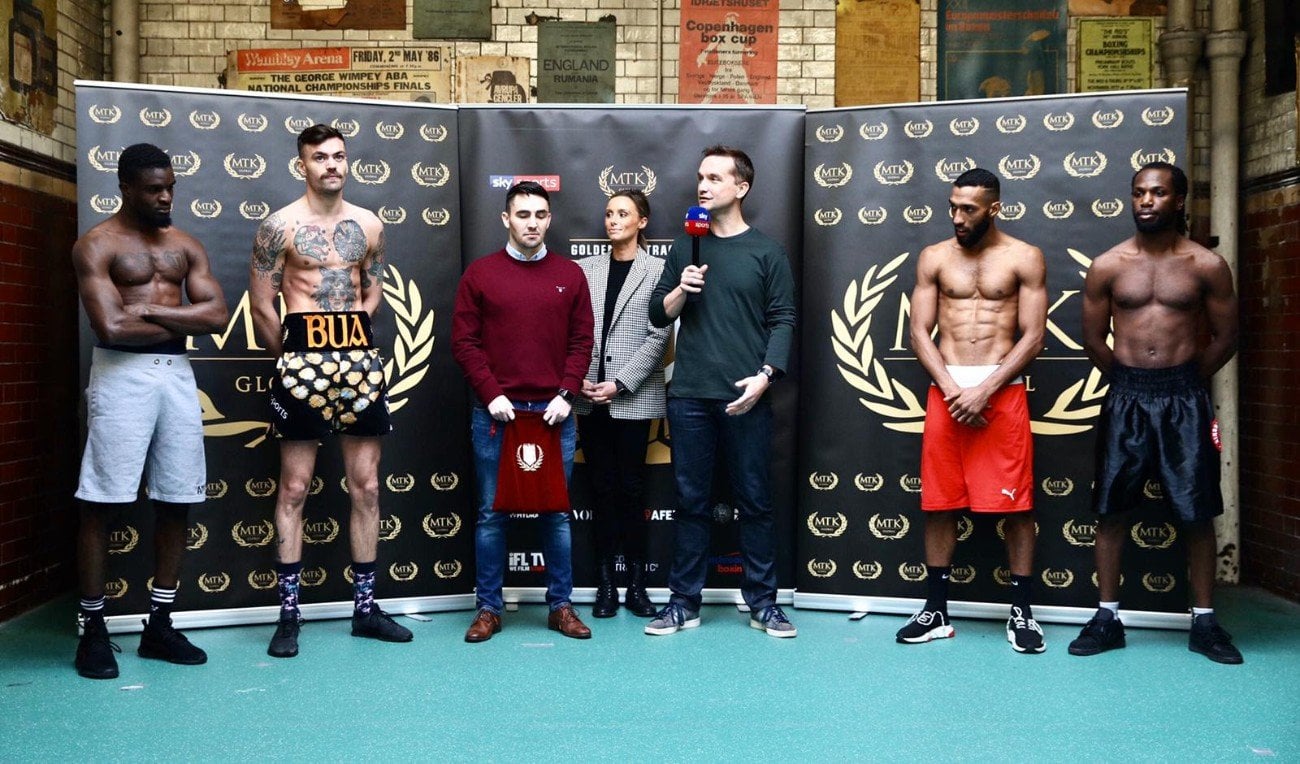 The featherweight and super lightweight MTK Global Golden Contract tournament fields will be narrowed down Friday, as the 10-round semifinal bouts will be contested from London’s York Hall. ESPN+ will stream the fights beginning at 2:30 p.m. ET/11:30 a.m. PT.

Former top prospect Davies (20-2, 15 KOs) revitalized his career in the quarterfinals with a seventh-round stoppage over Logan “Korican Kid” Yoon. Ofori (10-1-1, 3 KOs) was saddled with a draw in the quarterfinals against Kieran Gething, but the referee broke the deadlock and scored the contest for Ofori. McKenna (20-1-1, 6 KOs), from Belfast, has won four in a row and notched a near-shutout over Mikey Sakyi to advance. Former European Union and French welterweight champion Mimoune (22-3, 3 KOs) rose from a second-round knockdown in his quarterfinal bout to stop Darren Surtees in the fifth round.

Former British featherweight champion Walsh (25-2-2, 12 KOs) knocked out then-beaten Hairon Socarras in nine rounds to punch his semifinal berth. McCullagh (14-0, 6 KOs) bested Razaq “Lionheart” Najib via unanimous decision in the quarterfinals and is campaigning as a featherweight after winning the WBO European junior featherweight belt in October 2018. Former world title challenger Dickens (28-3, 11 KOs), from Liverpool, England, has won six in a row since a two-fight losing skid. He won a clear points verdict over former European Union and Spanish featherweight champion Carlos Ramos to advance to the semifinals. Wood (23-1, 13 KOs) made perhaps the most emphatic quarterfinal statement, as he knocked out the previously unbeaten Irish Olympian Davey Oliver Joyce in nine dominating rounds.

There were some huge surprises during the #GoldenContract semi-final draw, with the Golden Ball adding the drama that was expected.

A Golden Ball was added into the semi-final draw, with the fighting selecting it able to choose their opponent from the three remaining fighters that selected the red balls.

In the super-lightweight draw, the Golden Ball was selected by Ohara Davies, who surprised many by choosing Jeff Ofori, instead of Tyrone McKenna. It means that McKenna will face Mohamed Mimoune in the other semi-final.

In the featherweight draw, the Golden Ball was selected by Ryan Walsh, and there was some more surprising faces in attendance as he decided to pick Tyrone McCullagh, leaving Leigh Wood to take on Jazza Dickens in the other semi-final.

Here’s all you need to know from the dramatic draw…

Davies said: “Everyone has talked about me and Tyrone, but there isn’t any beef. Boxing is fun and we talk trash, but Ofori is the one I picked. Hopefully, McKenna can win his fight and then we can make a great final as I would like to meet him in the final.

“The first time I saw Ofori was at the last show. He had a great fight and he’s a natural lightweight, so making weight for him is no issue. I’ve had to get my head down in the gym and with grit, blood sweat and tears, I’ve got to make 10st, but it will be easier making weight for him.

“I don’t overlook anybody. Hopefully, this will be a great semi-final and I can get through to the final.”

Ofori said: “I’m fully prepared. I knew whoever got the Golden Ball would pick me, so it’s no problem. I’m ready to go.”

McKenna said: “Mimoune is a classy boxer. I’m excited to get in there and I believe he’s ranked top 15 in the world by the WBC, so I’m looking to get that ranking.

“I got hurt in the last round and that switched me on when I was getting a bit complacent, so I knew I had to be smart to get myself into the semi-final. He’s the problem, but I’m the solution.”

Mimoune said: “For me, this fight is no problem. Whether it was McKenna, Ohara or Ofori, I am just very excited to fight anybody.”

Walsh said: “I had a few different things to think about. I didn’t think I’d get the Golden Ball, I’d have preferred the Red Ball. Stylistically we’ve worked more for this style, so we’ll see how it plays out.”

McCullagh said: “I’m confident in my own ability. I’m glad I got picked as I didn’t want the Golden Ball. Ryan Walsh is a great fighter and has lots of respect, so this is going to be a great fight.”

Wood said: “This is a good fight for Sky Sports as Jazza has a lot of experience and is a good fighter. He has a British title on his resume, so I know it’s going to be a great fight.”

Dickens said: “This is the fun of the draw. I’m happy with my opponent, so all the best to us both.”

MTK Global Professional Development Coordinator Jamie Conlan added: “Tyrone McKenna was telling me that Ohara Davies prank called him two weeks ago! So I was expecting Ohara to pick him, so that was a surprise.

“It’s probably a good tactic move from Ohara to then set himself up nicely for the final. At featherweight, I think Wood and Jazza will be Fight of the Night. British Boxing has been speaking of these men for a while, and Jazza has been the dark horse in the tournament.

“Walsh and Wood had the pressure on their shoulders from the start, and Jazza against Wood is a very good British match-up so it has played out nicely for the public.

“The knockout bonuses continue and with Ohara, Mimoune, Wood, and Walsh getting knockouts in the last round, it rolls over and is now a £7,500 bonus for them, so that’s a big added incentive on their behalf. The other fighters can still get the original knockout bonus of £5,000 too.”

Sky Sports’ Andy Clarke added: “McKenna against Mimoune is a really good fight, and that’s what makes it such a good competition. Ohara has talked about making the weight, and Ofori’s shoulders are loose and he has absolutely nothing to lose.

“There has been no kind of beefs in the featherweight competition, so it was interesting to see who was picked when the Golden Ball was drawn. McCullagh is such a handful stylistically, so I don’t know why you would pick him.”

The fight week activities continue throughout the week, with the press conference on Wednesday, weigh-in on Thursday, and the all-important fight night on Friday.