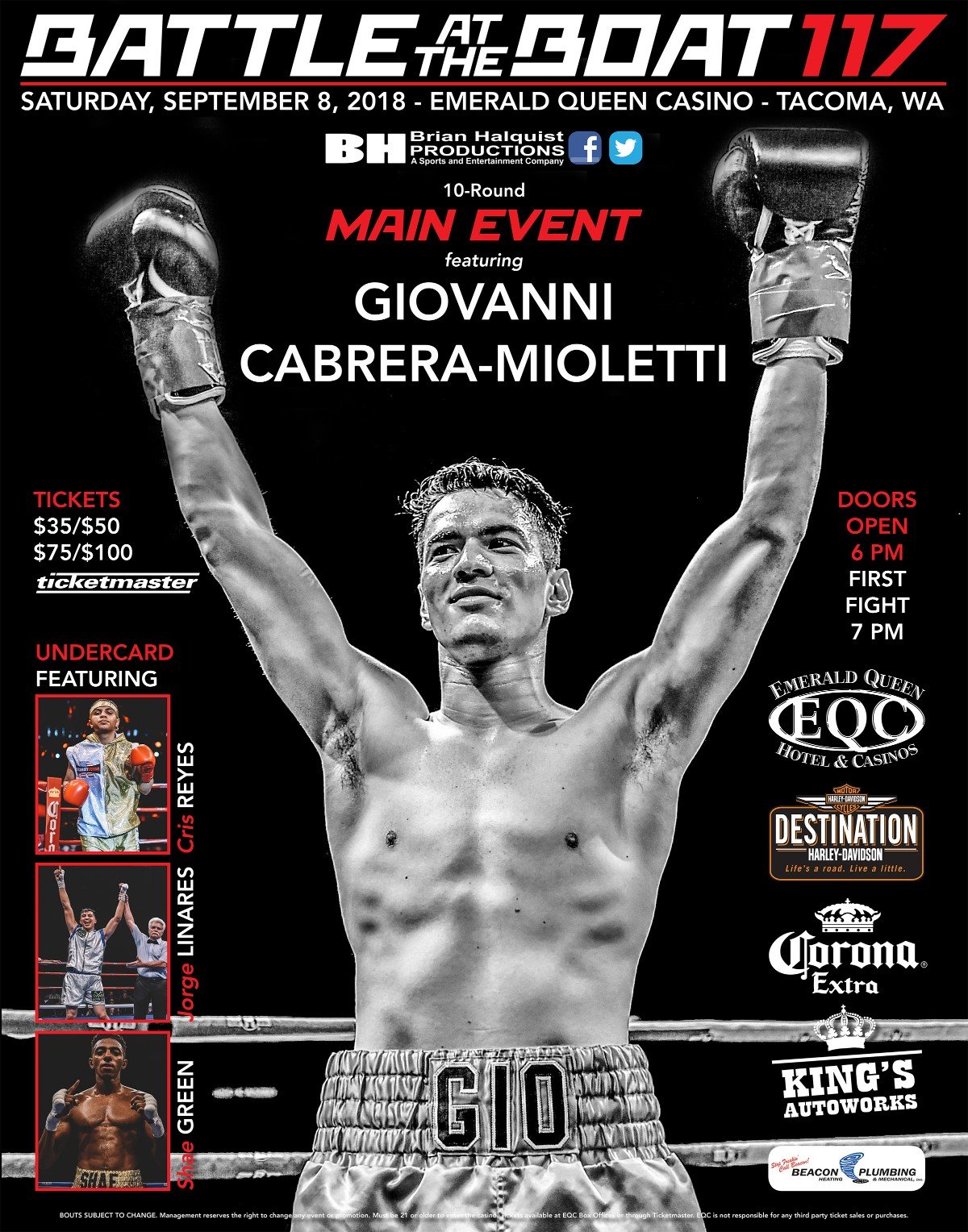 Following quite a bit of shuffling Giovanni Cabrera-Mioletti now finally knows who he will be facing in the main event at Battle at the Boat 117.

The undefeated Cabrera-Mioletti will go up against Carlos Padilla in a 10-round junior lightweight bout on Sept. 8 at the Emerald Queen Casino in Tacoma, Wash.

“This is an excellent matchup,” promoter Brian Halquist said. “We had a handful of fighters agree to face Gio, but ultimately, each one pulled out before everything was finalized. Gio is undefeated and word is out about him and what he can do inside that ring, which is great, but it also makes it extremely difficult to find opponents who are willing to step up and fight him. Carlos has fought for an interim world title and has been in the ring against some of the best fighters in the world. It should make for an exciting night of boxing.”

The 131-pound contest is scheduled for 10 rounds and highlights the six-bout card, which also includes an intriguing semi-main event between fan favorite Jorge Linares and Seattle’s Shae Green.

Cabrera-Mioletti brings a perfect 12-0 record with 3 KOs into the contest, while Padilla sports a 16-7-1 mark, winning 10 of his fights by knockout.

Cabrera-Mioletti has looked razor sharp during his last three fights. He is coming off of back-to-back triumphs over previously undefeated fighters in Elijah Pierce and Ray Lampkin, Jr. He also registered a victory over former Global Boxing Union world lightweight champion Tyrone Harris.

“Gio has all the tools to be a star in this sport,” Halquist said. “He’s well on his way to accomplishing just that. He’s a once-in-a-generation type boxer for this area. Fight fans really should come out and watch him now because this kid is headed towards great things.”

Cabrera-Mioletti bested Pierce, who entered their fight with a spotless 8-0 record with 7 KOs, in his last fight on June 9, flooring Pierce for the first time in his career in the first round before going on to be named is the 97-92, 97-92, 100-90 winner of the judge’s scorecards.

That win came after Cabrera-Mioletti defeated a then 11-0 Lampkin by second-round TKO.

Padilla enters the bout with an impressive resume of his own.

The 29-year-old Padilla fought Emanuel Lopez for the interim World Boxing Association world super featherweight title in 2015, entering the contest with a 15-1-1 record.

Rounding out the card will be a 142-pound matchup between Andres Garcia Albaca (debut) and Luis DeAlba (debut) and a 127-pound fight between Juan Gomez (1-0) and Marco Flores (1-1).

Battle at the Boat 117 will feature the VIP experience with 3rd Row Seats being discounted to $75 per ticket. All fans seated in in the VIP section (rows 1-3) will have an exclusive access point and a dedicated server to help create a true VIP experience.

Battle at the Boat 117 Card