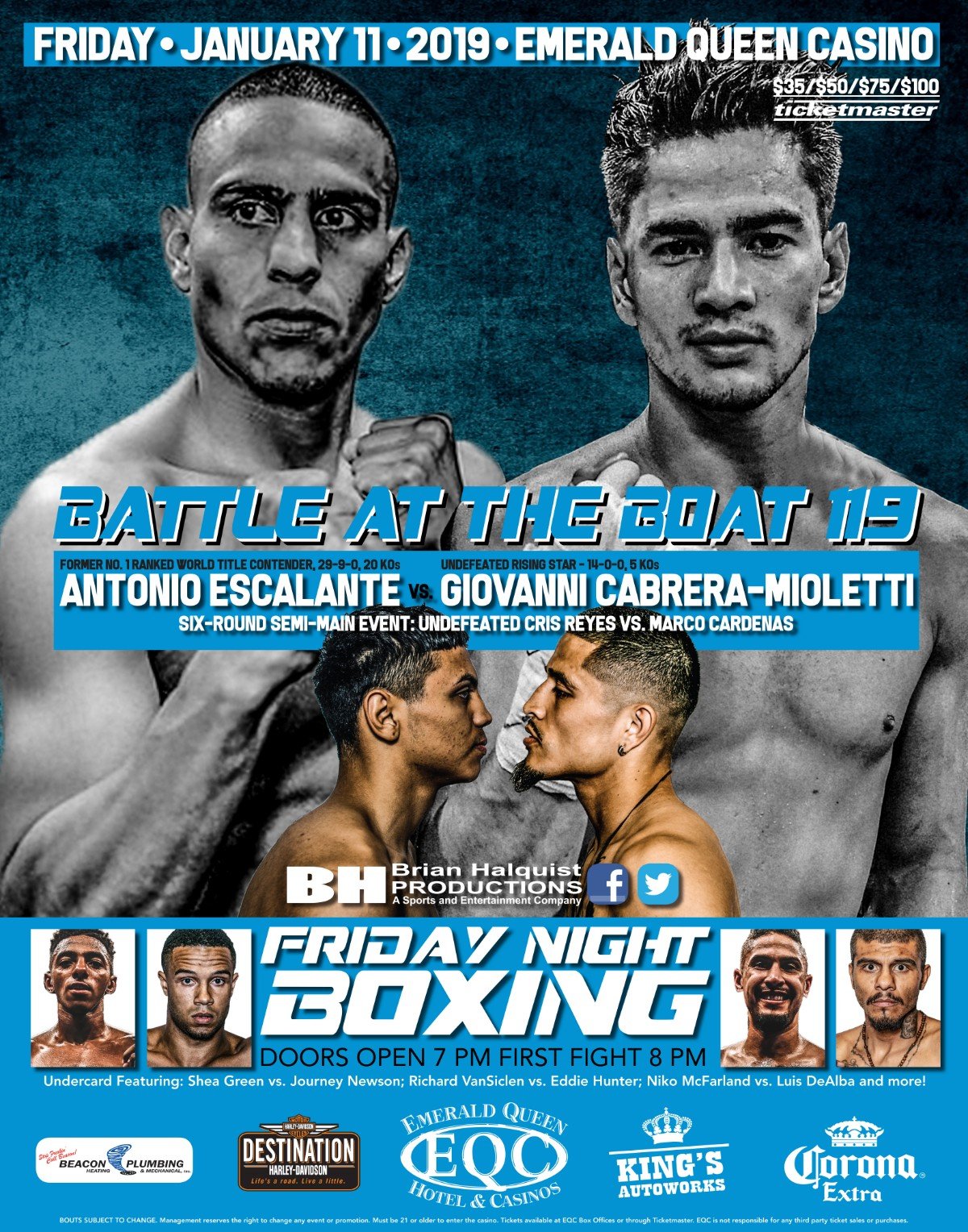 Brian Halquist Productions will kick off its 2019 Battle at the Boat boxing schedule with a special Friday night event on Friday, Jan. 11 at the Emerald Queen Casino in Tacoma, Wash.

Headlining the 119th edition of the Battle at the Boat series will be a 10-round main event in the super featherweight division between undefeated Giovanni Cabrera Mioletti and former world title contender Antonio Escalante.

Cabrera Mioletti, a native of Seattle, who now fights out of Chicago, brings a spotless 14-0-0 record with 5 wins coming by knockout into the contest, while Escalante is 29-9-0 with 20 KOs.

Tickets are available through the EQC box office and all Ticketmaster Outlets. Preliminary bouts will start at 8 p.m.Doors open at 7 p.m.

The six-bout card will also feature a 6-round semi-main event between undefeated Cris Reyes and Marco Cardenas in the light welter weight division.

Highlighting the undercard will be undefeated Richard Van Siclen,who takes on Eddie Hunter in a clash of 175 pounders, and a junior welter weight fight between Shae Green and Journey Newson.

In addition to a victory over Carlos Padilla, Cabrera Mioletti also bested previously undefeated fighters Ray Lampkin, Jr., Elijah Pierce and Headley Scott during his 2018 campaign with the latter coming on Nov. 11 Battle at the Boat 118 card.

“Gio had a phenomenal year.Just having a boxer who is willing to step into the ring with three undefeated fighters over an eight-month stretch is impressive, but to have him win all three fights, and to do it in such a dominating fashion, shows you just how gifted a boxer he is,” promoter Brian Halquist said. “Escalante is the next step. He has been in the ring with some of the world’s best fighters, and will undoubtedly be Gio’s toughest test to date. This is a great main event to open the New Year with.”

Cabrera Mioletti won’t be the only fighter at Battle at the Boat 119 looking to remain undefeated as Reyes and hard-hitting VanSiclen will also be attempting to keep their perfect records intact.

The 19-year-old Reyes has been on a tear since turning pro 15 months ago, going a perfect 5-0 while registering a knockout in each of his last four bouts.

Reyes may have a little bit of revenge on his mind in the fight as Cardenas is coming off a victory over Reyes’ Tenochtitlan Boxing Club teammate, Jorge Linares.

Cardenas made his return to the ring following a 14-month hiatus at Battle at the Boat 118 on Nov. 17 and proceeded to put on his best performance as a pro Derick Barlemay (0-8-2) by scoring a fourth-round TKO victory over the highly-regarded Linares.

Artem Harutyunyan vs Oliver Flores on April 24 in Hamburg, Germany

Battle at the Boat 119 is brought to you by Brian Halquist Productions and CageSport MMA. For more information, please visit the CageSport MMA Facebook page and www.halquistproductions.com