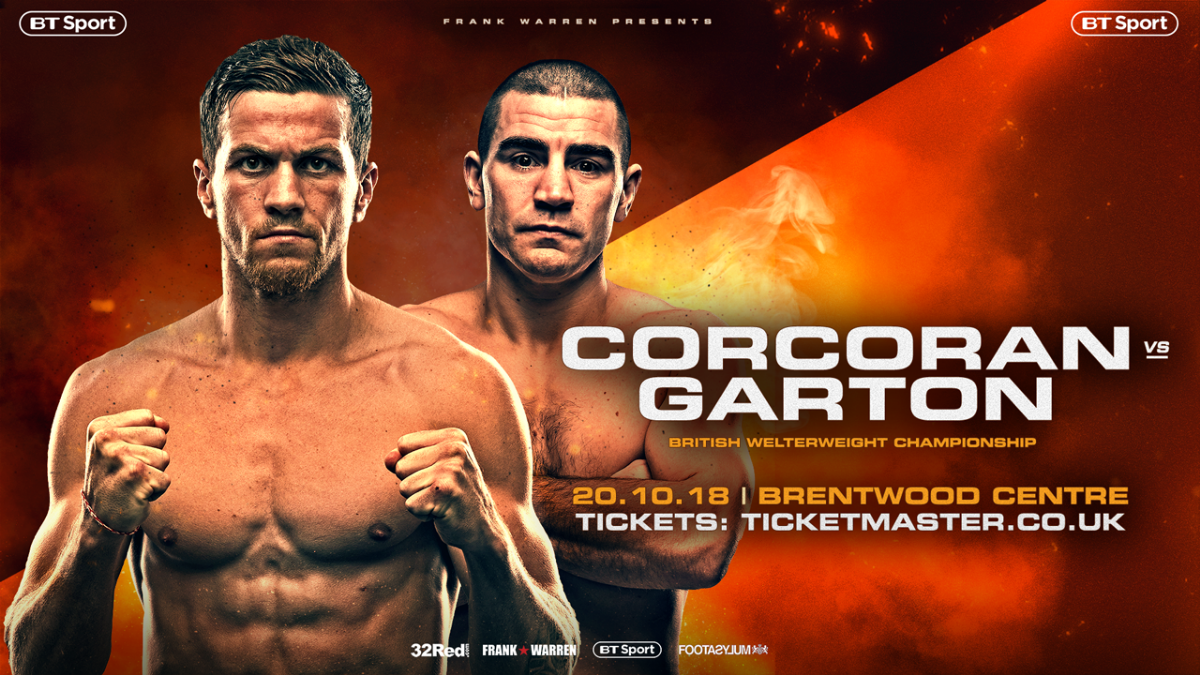 JOHNNY GARTON ADMITS that Gary Corcoran is a man after his own heart.

The pair come together in combat on Saturday at the Brentwood Centre – live on BT Sport – with the British welterweight title at stake.

The 31-year-old from Peckham – known as ‘The Pexican’ – insists there is no animosity on his part heading into the clash against ‘The Hellraiser’ from Wembley and actually places on record his admiration for the world title challenger, who was stopped in 11 by Jeff Horn in Brisbane last December.

It is a no quarter asked or likely to be given sort of fight and, the thinking in training circles is, whoever listens most to the wise words in the corner is expected to have the edge.

However, Garton – who expects to be roared on by some 250 Pexicans – fully anticipates himself and Corcoran reverting to type before too long.

“My trainer has said that the one of me and Gary who listens most in the corner will win and I do believe Al (Smith) is right there,” considered the IBF European champion. “But this is going one way and me and Gary both know that no matter how technical we try and be, at some point in this fight we are going to stand in the middle and go at it.

“And I am more than happy to do that!

“Gary likes to come out fast and I am prepared for whatever, all I’ve worked for is a tough night and a tough 12 rounds. Gary is also super-fit and that is one thing we know for sure about him. He is also very strong and game, so we know we are going to do it tough.

“I’d say Gary will be the favourite in this fight and I think he deserves to be. He had a better amateur career, he’s boxed at a higher level than I have as a pro and he has boxed better names.

“I like Gary and I have no problems with him. At the end of the day he is just who I’ve got to fight and he is my type of fighter. He will fight anyone, he’s game and he comes forward. That is what I like in people.”

Anthony Yarde will be headlining the Brentwood Centre on October 20th when he faces Argentinian Walter Gabriel Sequeira. World title challenger Gary Corcoran and Johnny Garton will contest the vacant British welterweight title. Zak Chelli and Umar Sadiq will both be putting their young, undefeated records on the line in a super-middleweight contest. Heavyweight Nathan Gorman will also feature along with IBF European Middleweight Champion Joe Mullender on the show televised live on BT Sport.

GARY CORCORAN is planning to wreck gym-mates Johnny Garton and Bradley Skeete inside the next few months.

The former world title challenger attempts the first leg of the double when he challenges Garton for the vacant British welterweight title at the Brentwood Centre on Saturday October 20th.

Corcoran (18-2) is annoyed that Skeete gave up the title and swerved him, adding: “There must be some reason why Bradley doesn’t want to fight me, but after Johnny I say, ‘Bring on Bradley’.

“I have chased Bradley for a long time and it has never happened, and if it doesn’t take place early next year we will never fight.

“I will not be overlooking Johnny who has done so well in his career, but his ambition is to be British champion. Mine is to be a world champion.

“We all know that Johnny is a come forward fighter, but if he tries boxing me I will box his head off. Whatever happens, I will hunt him down and beat him up.

“I am going to be too big and strong for Johnny. I am a level above Johnny and I will show it on the night.”

Corcoran, 27, is desperate to leave domestic level behind him once again and get back among the welterweight division’s elite.

His defeats came on points against Liam Williams more than two years and in a WBO world title challenge against Jeff Horn in Brisbane last December when he was stopped in 11 rounds.

Sandwiched between those setback was a win over highly ranked Nigerian Larry Ekundayo.

He added: “I know that on my day I can mix it with the best welterweights and apart from maybe Bradley, I am levels above most of these kids in Britain.

“I have lost to world class fighters. Johnny hasn’t fought anybody like that.

“Bradley fought one world class opponent, Kerman Lejarraga and got stopped in two rounds. I’ve boxed and beaten someone at a higher level than Bradley in Ekundayo.

Anthony Yarde will be headlining the Brentwood Centre on October 20th when he faces Argentinian Walter Gabriel Sequeira. World title challenger Gary Corcoran and ‘The Pexican’ Johnny Garton will contest the vacant British welterweight title. Zak Chelli and Umar Sadiq will both be putting their young, undefeated records on the line in a super-middleweight contest. Heavyweight Nathan Gorman will also feature on the show televised live on BT Sport.