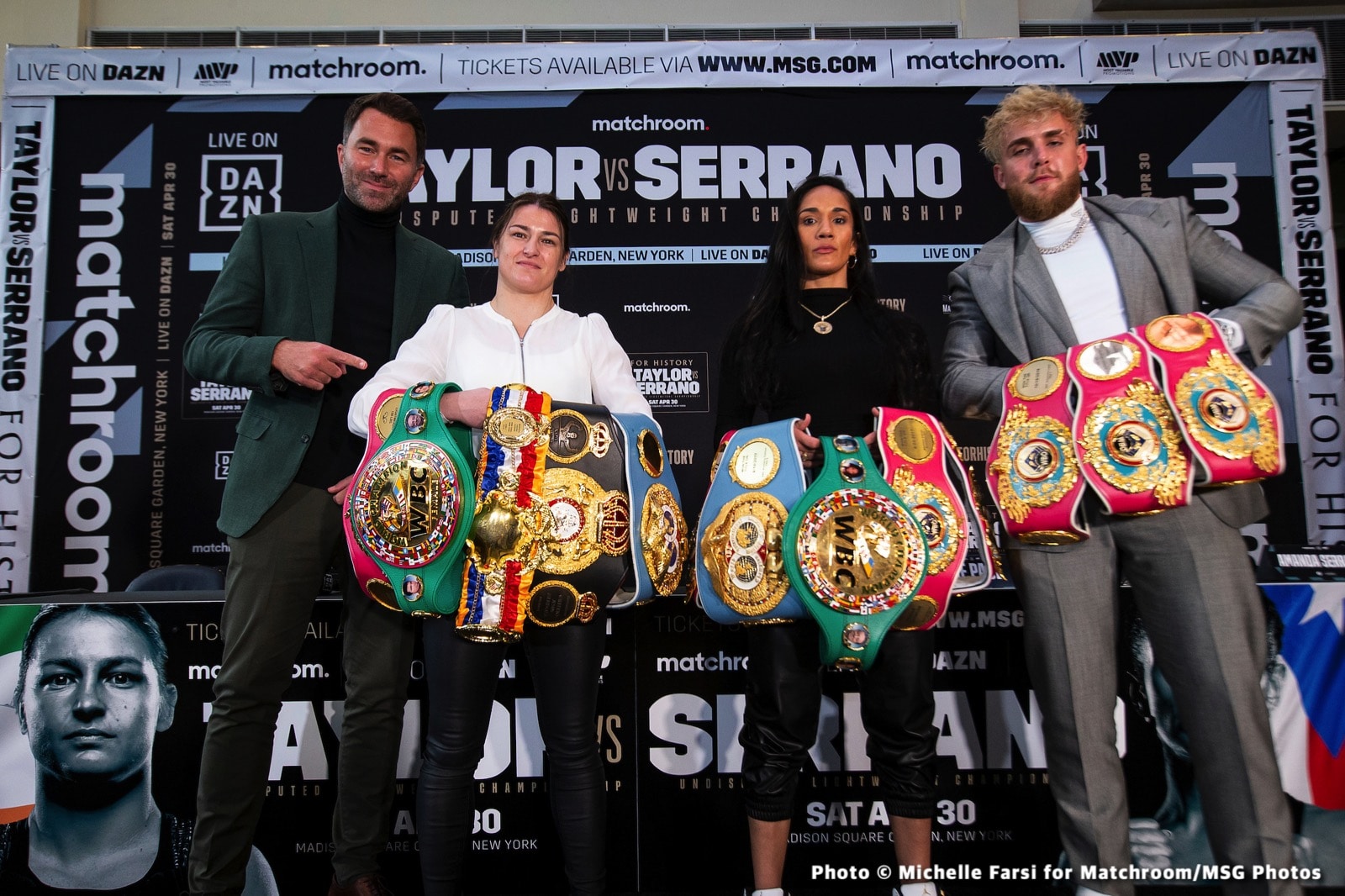 Katie Taylor and Amanda Serrano are set to make history in an epic battle for Taylor’s undisputed Lightweight title at Madison Square Garden in New York on Saturday, April 30 live worldwide on DAZN – and Taylor is thrilled to be part of shining the brightest ever light on women’s boxing.

TICKETS FOR TAYLOR VS. SERRANO ARE ON SALE NOW

Taylor and Serrano will become the first female fighters to headline ‘The World’s Most Famous Arena’ in its 140-year history in the process. Irish favorite Taylor (20-0 6 KOs) puts her 135lbs hardware on the line for the sixth time in the Big Apple and does so against seven-weight champion Serrano (42-1-1 30 KOs), the Puerto Rican ace and Brooklyn native.

Both fighters can proudly state that they have played huge roles in the recent rise in popularity for women’s boxing, and when they step through the ropes at the famous arena in ten days’ time, they smash through yet another glass ceiling and showcase women’s boxing on the grandest of stages.

“This is just a special occasion for me, to headline a huge fight like this at Madison Square Garden,” said Taylor. “It’s being billed as the biggest fight in female boxing history. This is just incredible and a real privilege for me. 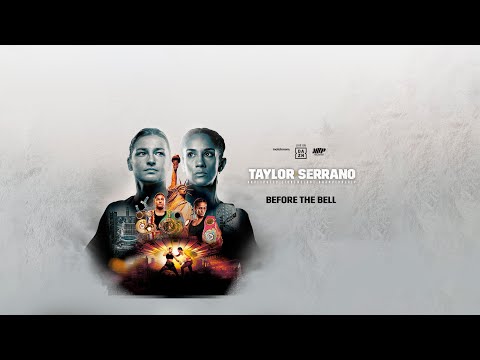 “I love being involved in these kinds of fights. These are the challenges that I’ve always wanted. I don’t think I’ve ever backed down from any challenge. I’ve wanted to face the very best.

“Amanda Serrano is a fantastic fighter, she’s a great champion and she’s not here for no reason. She deserves this opportunity as well. She’s been pioneering her own way and that’s why this fight is the best in female boxing history. We have champion versus champion. The best versus the best and this is why this fight is so special.

“This fight is genuinely the biggest fight in boxing as a whole right now! 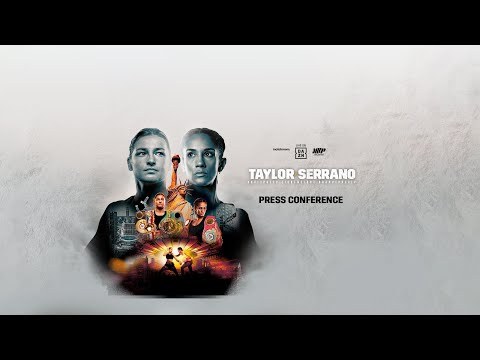 “I feel very privileged to be in this position and to be an inspiration to the next generation and to have those young girls look up to me. It’s a huge responsibility as well and I want to set a great example for these young girls coming up. I want to give them hope and I want them to know thy dreams they have in their hearts can be possible.”

“Growing up I had to pretend I was a boy to get fights. I had the headgear on, and my hair tucked into the headgear. They just had my name down as K. Taylor and obviously when the headgear came off there was an uproar because all the judges and officials saw I was a girl.

“I don’t grave the attention or crave the media attention. I don’t want to be famous; I just want to be the best boxer in the world.

Skye Nicolson added to Taylor vs. Serrano card on April 30th on DAZN

Skye Nicolson will become the first Australian female to step through the ropes at Madison Square Garden when she fights on the undercard of the historic clash between Katie Taylor and Amanda Serrano on Saturday, April 30 in New York, live worldwide on DAZN. 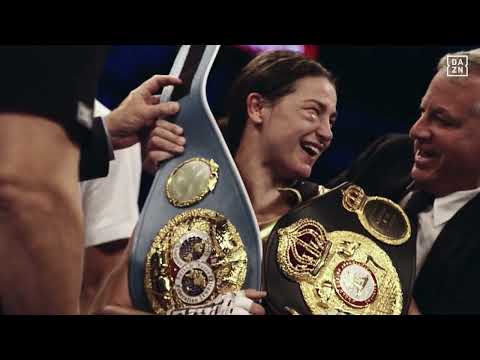 Nicolson (2-0) returns to the States for her third pro-outing after making her debut in San Diego at the start of March and then making it two wins from two in Leeds at the end of the month.

The Australian, who won Commonwealth Gold in 2018 and represented her country at the 2020 Olympics, joins an all-star cast on April 30 in the Big Apple and makes her own piece of history on a night where Taylor and Serrano, the pound-for-pound #1 and #2 fighters of the world is one that will not only make boxing history but women’s sports history. MSG has hosted thousands of fights through its illustrious years, beginning more than a century ago on July 17, 1882; now, 140 years later, this matchup finally marks the very first time two female fighters are headlining a combat sports event at ‘The World’s Most Famous Arena.

The 26-year-old southpaw will face Shanecqua Paisley Davis (3-1) over six rounds, and with the main event shining the brightest of lights on the rise of women’s boxing, Nicolson is thrilled to be sharing the stage with the main event and another undisputed battle between Super-Middleweight champions Franchon Crews-Dezurn and Elin Cederoos.

“It’s an honor for me to not only fight on this historic card but also to become one of the few Australians to fight at the Mecca of boxing Madison Square Garden and the first female,” said Nicolson. “This is a game-changing moment for Women’s boxing and I’m so grateful for this opportunity to feature on this show.

“For me personally it will be three fights in eight weeks on both sides of the Atlantic, I feel like I’m improving every day and the opportunities that Matchroom and DAZN are giving me are helping me grow on my journey to become World champion. See you in NYC!”

“This is a massive night for boxing, and I am delighted to complete a great undercard with Skye,” said promoter Eddie Hearn. “She’s been faultless in her first two fights so far, and on this most momentous of nights for female fighters, she will be able to show the world what she is capable of on the biggest of stages.” 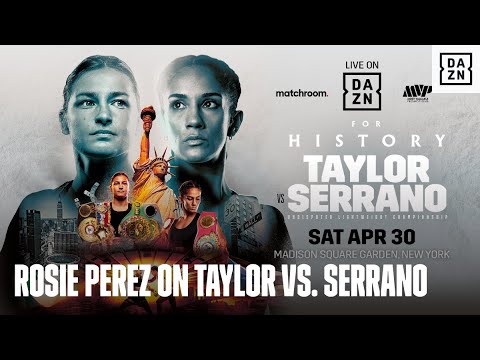 Galal Yafai will make his American debut in the pro ranks as he defends his WBC International Flyweight Title against Miguel Cartagena on the undercard of the historic clash between Katie Taylor and Amanda Serrano at Madison Square Garden in New York, live worldwide on DAZN.

Yafai (1-0 1 KO) made his hotly-anticipated pro bow in February at The O2 in London, and showed why there was such a scramble to sign the 2020 Olympic Gold medal winner by stopping Carlos Bautista inside five rounds to land the crown he puts on the line in the Big Apple.

The 29 year old is the youngest of the three talented Yafai brothers from Birmingham, England, and follows former World ruler Kal in stepping through the ropes Stateside, but could face a hostile crowd when doing so against Cartagena (17-6-1 8 KOs), the Puerto Rican from Philadelphia who will be hoping the Puerto Rican fans there to roar on Serrano in the main event will back him to derail Yafai’s journey early.

“I’m hugely excited for my second professional fight on the historic Katie Taylor vs. Amanda Serrano Undisputed Lightweight World Title show at the world-famous Madison Square Garden in New York on April 30,” said Yafai. “Big thanks to Eddie Hearn and Matchroom for getting me out so soon after my debut win in London earlier this year.

“Boxing at such an iconic venue in just my second fight is a massive box ticked for me and I’m looking to impress in front of an American audience and all around the world on DAZN. Miguel Cartagena is another opponent that will be coming to win on home soil, but I’ll be keeping hold of my belt with a stylish win and to show people how good I am.” 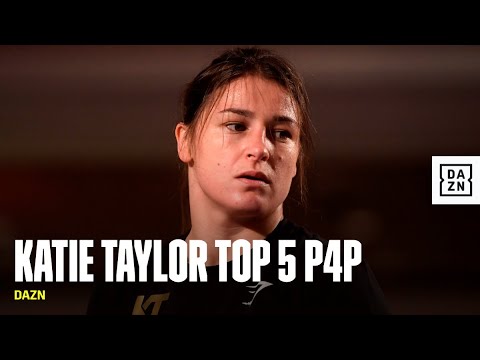 “This is a huge opportunity for me and one I’ve been waiting for,” said Cartagena. “I know they think this is a showcase for him, but they are in for a rude awakening. I wanted this fight. I’ve been asking for it.

“I know the Puerto Rican fans will be there supporting me and I don’t plan on disappointing them. They made a mistake and come April 30 they are going to find out.”

“This is a great opportunity for Galal to show the world what we all think – that he’s a very, very special fighter,” said promoter Eddie Hearn. “These are the spotlights and platforms that rising talents thrive on, and i expect Galal to do just that – but with the Puerto Rican fans on his side, Miguel is going to give everything he’s got to spoil Galal’s night. It’s another great addition to what promises to be an unforgettable night in New York.”

Taylor v. Serrano will have a star-studded supporting cast when Jessie Vargas and Liam Smith meet in a must-win battle at Super-Welterweight and there is more undisputed action on the card as Franchon Crews-Dezurn and Elin Cederroos decide who is the top dog at 168lbs.