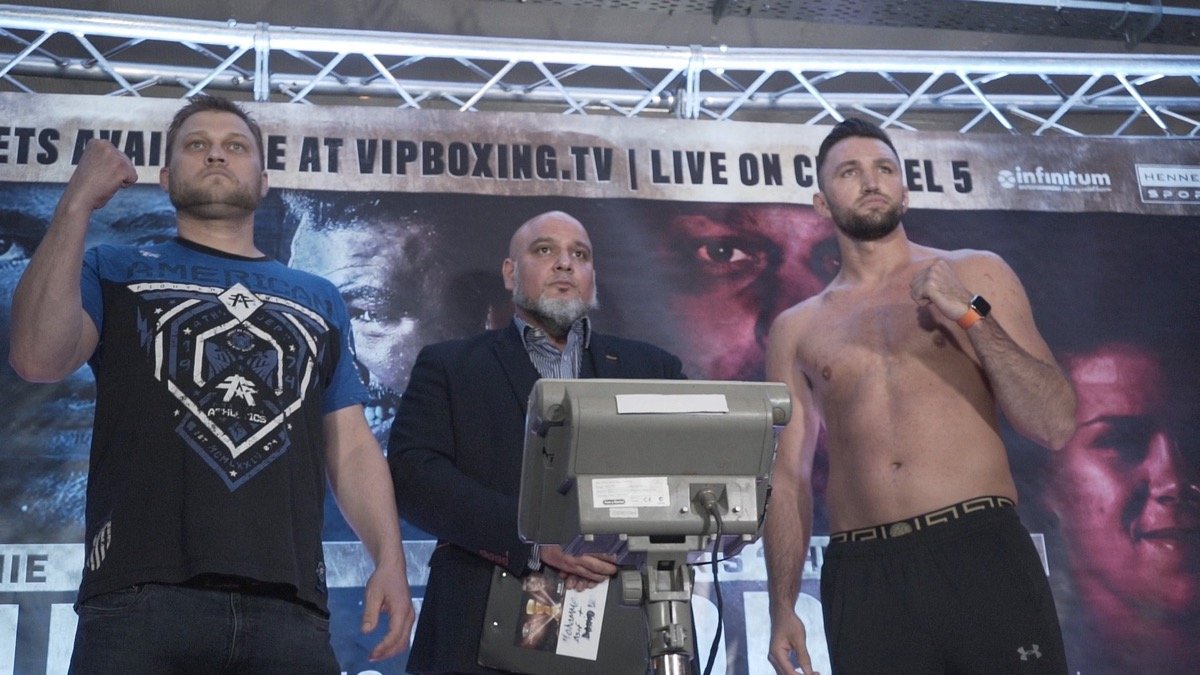 The hugely gifted and ex-undefeated British heavyweight boss Hughie Fury is ready to mount a third assault towards the world title starting this Saturday night, exclusively live on Channel 5.

London, UK (21 May 2019) Polite and humble to a fault, the cousin of gregarious lineal world heavyweight champion Tyson Fury has long shown himself to be one of the finest technical talents from these shores, now he intends to show he can also be among the most explosive.

In his eagerly anticipated ring return – following a gallant and gory 12 round points reverse to Bulgarian beast Kubrat Pulev in last October’s IBF final eliminator over in Sofia – the 6ft 6in Manc aims to justify his ‘Fists of Fury’ ring monitor by clattering unbeaten Canadian Chris Norrad when the titans bash beaks at Manchester’s Victoria Warehouse on May 25th.

‘The win is not the priority. It’s HOW I win. I’m gonna put on an exciting show. This time, like the Sam Sexton fight (a brutal fifth round blow out to bag the British title 12 months ago), there’s gonna be fireworks,’ insists Fury who has previously slaughtered 11 victims inside schedule.

‘For a start, you’ll see a big difference in my physique because we’ve brought (feted strength and conditioning guru) Kerry Kayes on board and I’m much stronger in my body.

‘I never liked sounding my own horn. Fighters can talk as much as you want during the build-up but I’ve always preferred to do my talking on fight night, inside the ring, the only place that matters.

‘In camp, I’ve been working on an improved skillset – varying my work up – and mastering new strategies. You’ll definitely see me moving forward more this fight, rather than running around.’

It’s been some journey since England’s first ever World Youth super-heavy gold medallist (Armenia, 2012) vaulted into the pros as a gangly 18 year old in March 2013. Still only 24, Stockport-born Hughie, the fifth of father-trainer Peter’s six offspring, has already showcased his skills in eight different countries, ruled on the domestic throne and proved competitive on the elite stage.

Both defeats on Fury’s 23 fight slate came at a rarified level – a majority 12 round decision in a close and controversial WBO challenge to New Zealand’s Joseph Parker in September 2017 and that cut-compromised loss to Pulev overseas – but his quest to become one of the sport’s youngest ever heavyweight world champions has been blighted by injury (back problems) and illness (a mystifying skin disease which affected his immune system).

‘I’ve had some of the best experiences yet some of the worst luck,’ surmised the Stockport-born stylist.

‘Fighting the national hero Pulev in Bulgaria, out of my comfort zone, provided experience you can’t buy. But since the World Youth’s in Armenia, I’ve always been able to switch off from any hostility.

‘After a cut from sparring re-opened in round two, I couldn’t put my full attention to the fight, couldn’t show what I was capable of.

‘The docs told us beforehand the cut would stick together after stitching so we took a chance but it opened straight away. After that, the game plan went out of the window. I couldn’t see.

‘Initially the ringside doctor said: ‘Just one more round’. Panic set in and I attacked like a maniac. That tired me out. I just didn’t have a proper chance. I’m still confident I’d comfortably out box Kubrat without a cut.’

Earlier this year, Fury abdicated his British crown – ‘been there, nothing more to prove’ – to focus exclusively on replicating his esteemed cousin’s capers on the global stage. Already ranked 14th by the IBF, he knows a destructive display against fellow contender Norrad, 17-0, is sure to court favour with other sanctioning organisations.

‘There’s not an awful lot of footage available on Norrad so it’s a case of seeing what he can do on the night. But he’s never tasted defeat so will arrive with a certain amount of confidence. We’ll have to knock that out of him!’ quips Hughie.

‘It’s always good to perform in your hometown and this has the makings of a great show. I intend putting into practise everything I’ve been working on in the gym.

‘With me it’s always one fight at a time but I crave the biggest fights and I’m not afraid of anybody in the world.

‘A class performance in Manchester will get me back into the mix.’

Promoter Mick Hennessy is thrilled to announce that he has signed an exclusive official equipment partnership agreement with Everlast, the world’s leading manufacturer, marketer and licensor of boxing, MMA and fitness equipment.

All the action will be exclusively live on free-to-air 5 Spike from 7-9pm before coverage switches to Channel 5 from 9-11pm.

Under the agreement, Hennessy Sports events will be branded with the iconic Everlast logo in and around the boxing ring and the fighters’ promoted exclusively under the Hennessy banner will wear the famous fight brand’s equipment and apparel.

Hennessy, CEO of Hennessy Sports, said, “I’m delighted to agree this deal with Everlast who are globally recognised as the premier boxing brand and have an unrivalled history and tradition in the sport. I’m looking forward to beginning our relationship tomorrow night in Manchester with heavyweight star Hughie in the main event, live on Channel 5.”

Luke Smith, Everlast’s Brand & Sports Marketing Manager for UK & Europe, added, “We’re very excited to be working with Mick and the team at Hennessy Sports, as well as Channel Five. Mick is planning a big 2019 and we look forward to supporting some great free-to-air nights for boxing fans whilst helping to grow the sport.”