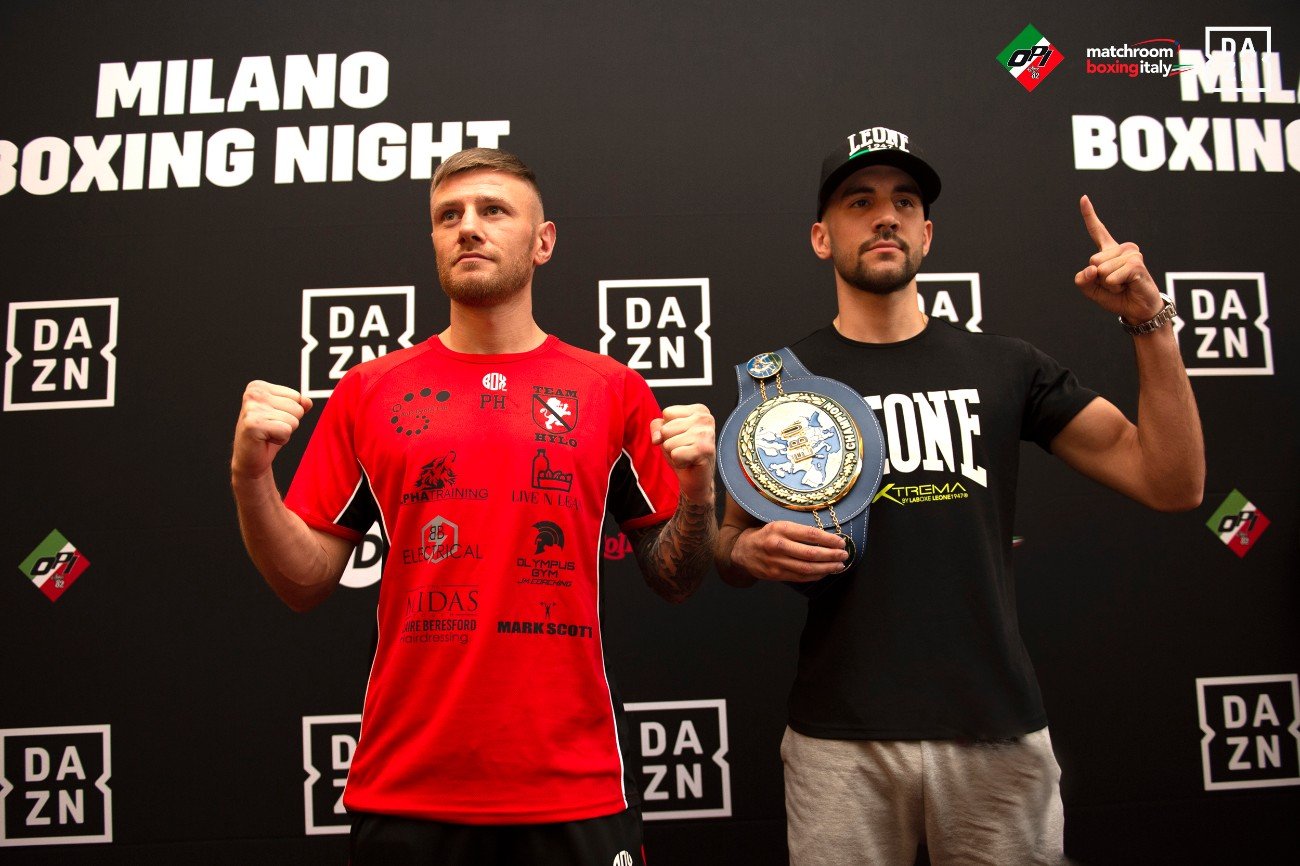 The fight between European lightweight champion Francesco Patera (22-3 with 8 KOs) and Italian lightweight champion Domenico Valentino (8-0 with 1 KO) on the 12 round distance is the co-main event of the October 25 card at Allianz Cloud in Milan, Italy, promoted by Opi Since 82, Matchroom Boxing Italy and DAZN which will stream it live.

Born in Belgium from Italian parents, Francesco Patera won the European lightweight belt twice: the first time against Edis Tatli in Finland (Patera lost the crown in the rematch), the second time against Lewis Ritson at Metro Radio Arena in Newcastle, England, in front of 10,000 British fans. Going to the U.K. to beat the local hero in front of his fans it’s a task that only a very talented fighter can accomplish. That victory gave Francesco Patera the mainstream status, in Europe, that he was looking for.

Since then, Francesco Patera successfully defended the European belt twice, the last time in Milan against Paul Hyland Jr. (TKO 6) with a spectacular performance that excited the spectators at Allianz Clud, the DAZN viewers, the journalists and the boxing people. Despite his professional record, Domenico Valentino has a great ring experience as he competed in 3 Olympics and became world lighweight champion as an amateur in September 2009 in Milan defeating in the final Jose Pedraza who went on to become IBF/IBO world super featherweight champion and WBO world lightweight champion.

Among amateurs, Domenico Valentino also defeated Josh Taylor, who went on to become IBF world super lightweight champion. Domenico Valentino had two amateur fights with Vasyl Lomachenko, losing them: Valentino says that the first time was almost even while the second time he was no match for Lomachenko who had learned the lesson well. “Lomachenko is an alien from another planet” Valentino says. Defending against such an experienced boxer should worry Francesco Patera, but he isn’t worried at all and he explains why.

Francesco, since when are you training for this fight?

“Since the second week of August. After my manager Christian Cherchi gave me the news, I was happy because I know Domenico Valentino’s style very well: I saw him competing as an amateur and I also saw on You Tube some of his professional fights. He is a great technician and moves a lot, but I am faster and more explosive. I’m sure to beat him and keep my belt on October 25.”

Domenico had a very long career as an amateur. Do you think this will compensate his short pro experience?

“No, because professional boxing is very different from amateur boxing. European title fights are on the 12 rounds distance, while amateurs are used to fight on the 3 rounds distance. I have more professional experience than him and this will be very important on fight night.”

Who are your sparring partners?

Do you think that you will knock Domenico Valentino out?

“My goal is to win every round. If I see an opening, I will go for the knock out. My priority is just winning.”

“We have a similar fighting style. I always said that he is my photocopy. Does he thinks to be more explosive than me? We’ll see on October 25. Every fight is a different story. Maybe in Milan I will be the explosive one. I was at Allianz Cloud last June 28 when Patera defeated Paul Hyland by TKO 6. That night I rooted for Patera. At the press conference, I will ask him to do a selfie.”

When your manager told you that you would have challenged Patera for the Euro belt?

“Last August and I got emotional. I couldn’t let this opportunity go away. Fighting for the European lightweight championship after only 8 professional fights is incredible. I am hungry, I want to win fights and titles and I hope that this will make the difference on October 25.”

Tell us about your training.

“I’m training twice a day: in the early morning I run for 1 hour, maybe 1 hour and 10 minutes. In the evening I go to the gym. I work as a police officer in Napoli, 25 km from my town of Marcianise. My job as a police office has the priority. In my free time, I train for my boxing career. I give 100% both on the job and in boxing.”

Did you have any boxing idols?

“The first one was Oscar De La Hoya, then Olympic super heavyweight champion Roberto Cammarelle, today is Vasyl Lomachenko. I fought Lomachenko twice. The first one as an amateur and the fight was almost even. The second time as a semi-pro on the five rounds distance in the World Series of Boxing. I must recognize that I was no match for Lomachenko the second time. He is an alien from another planet. Against him a fighter must be at his best to win a few rounds.”

You became amateur world champion beating in the final Jose Pedraza who became world champion as a pro in two weight divisions. Did you beat another famous name?

“Josh Taylor, who became IBF world super lightweight champion. I beat him 3 times, once at the Olympics in London. I’m still in contact with Josh. I like to keep good relationships with all the fighters. You’ll never hear me talking trash about another fighter. This is my 20th anniversary in boxing. As an amateur I had 280, maybe 290 fights. I plan to have many pro fights in the future.”