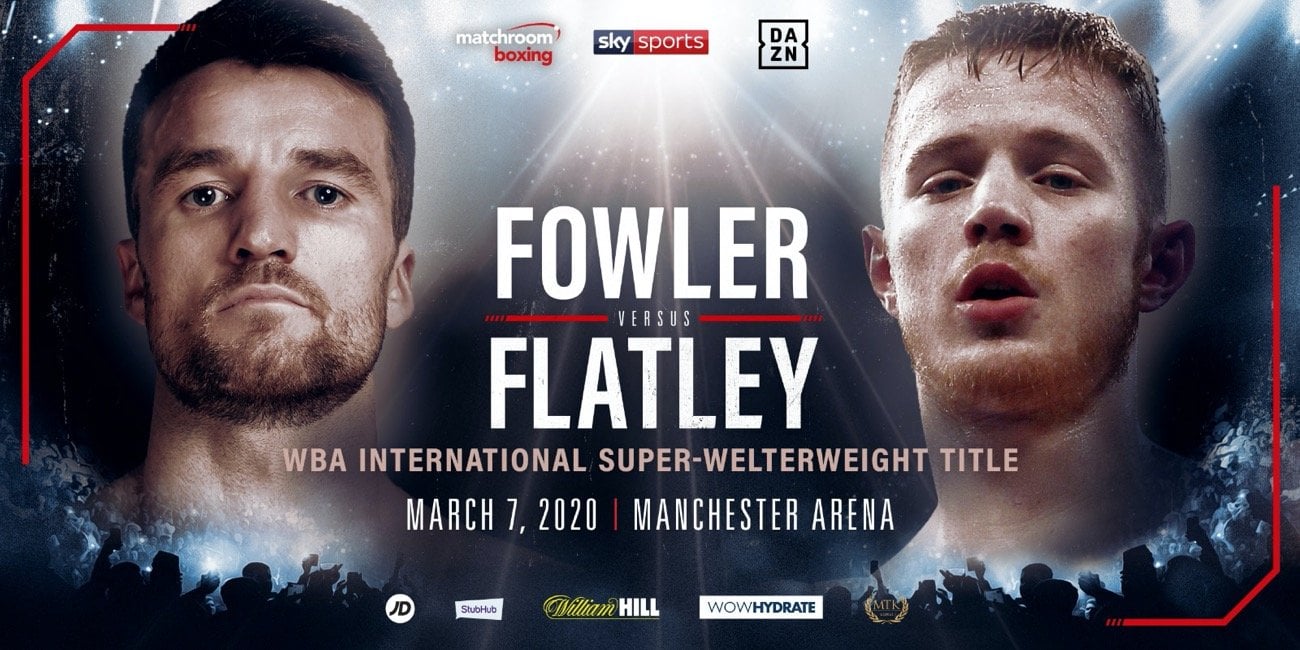 Anthony Fowler will defend his WBA International Super-Welterweight Title against Jack Flatley on the undercard of Scott Quigg vs. Jono Carroll at Manchester Arena on Saturday March 7, live on Sky Sports in the UK and DAZN in the US.

‘The Machine’ (11-1, 8 KOs) will be looking to impress in his first fight under new trainer Shane McGuigan after teaming up with the renowned coach at his Canterbury base alongside Matchroom stablemates Lawrence Okolie and Luke Campbell last month.

A rematch with bitter rival Scott Fitzgerald remains at the top of Fowler’s wish list in 2020 but the Commonwealth Games gold medalist is all too aware of the threat posed by Flatley and remains fully focused on the task at hand.

Flatley (16-1-1, 4 KOs), a former English Super-Welterweight Champion, has only lost once in his 18-fight career, he was edged out by Harry Scarff after ten hard rounds at the University of Bolton Stadium in September last year.

The Bolton favourite, 25, bounced back quickly from that defeat, outpointing Alistair Warren three months later in his hometown and hopes that a win over Liverpool’s Fowler will set up even more title opportunities in 2020.

“I watched his fight with Troy Williamson in the ABA Final as an amateur and when they boxed as pros, he’s a tough lad with a big heart and he comes to fight,” said Fowler. “Fans will definitely see a change in me since teaming up with Shane, I don’t wanna give too much away but it should be evident on the night.

“Obviously styles make fights, Flatley couldn’t cope with Scarff’s awkwardness when they fought but I could because I’ve seen it all before, that was for the English title, I see myself a much high level than that and I’ll show it when we fight.

“The only fight I want is the Fitzgerald rematch. A good win against Flatley sets that up nicely for the British Title, let’s tell Scott to give the fans what they want.”

“I’m massively excited to be taking on Anthony Fowler at Manchester Arena,” said Flatley. “I know how good he is, and I know he’s waiting for the big rematch with Scott Fitzgerald, but this is my chance to go in there and upset the apple cart.

“I’m going to prove that I belong at this level. He’s ranked in the top 13 with the WBA so it’s a great opportunity for me and to be fighting in front of millions of people around the world on Sky Sports and DAZN in a massive incentive for me.

“I’ve been training hard and waiting for a big opportunity like this so naturally I grabbed it with both hands when it presented itself. I’m not reading too much into him changing trainer to Shane McGuigan because Dave Coldwell is a brilliant coach anyway. I’m just focusing on me and what I’ve got to do.”

Fowler vs. Flatley is part of a huge night of action in Manchester.