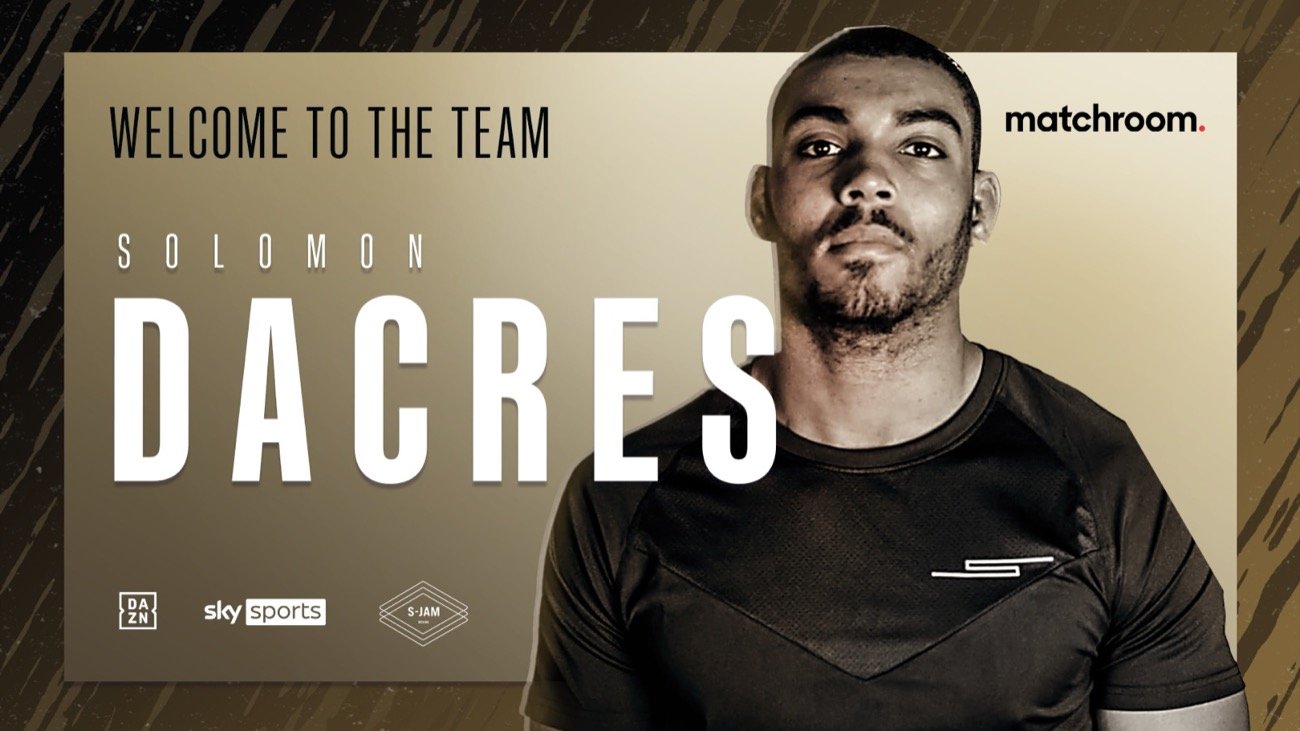 Birmingham Heavyweight Solomon Dacres is aiming for a knockout when he takes on Spain’s Alvaro Terrero at the Vertu Motors Arena, Newcastle on Saturday June 12, live on Sky Sports in the UK and on DAZN in the US and more than 200 countries and territories.

The 6ft 5ins 27-year-old, who is managed by Adam Morallee and Sam Jones of S-JAM Boxing, says he is reaping the rewards from sparring with undefeated British, European and Commonwealth Champion Joe Joyce ahead of this weekend’s clash.

“I’ll fight anyone. That’s just the type of person I am. I want to fight. I put the work in so I can fight anyone. Sometimes you’ve got to have managers and trainers to look from the outside and hold you back a bit and build you in the right way. That’s why you have a good team around you, and you build yourself properly. I’ve just got to make sure that I really put myself in the best position for when it comes. I’ve been doing that since I started boxing, working hard to build myself that platform. Now it’s there, I’m not going to let it go to waste. I’ve just got to keep putting myself through all of the hard training and stay dedicated.

“I’ve got to treat all of my opponents like they’re the best people out there getting in front of me. I don’t want to have ten fights against people that are only going to last two or three rounds. You want to progress to that level, because you’ve seen fighters in the past that have had easy touches for so many fights and then come unstuck when they’ve stepped up. I don’t want that to happen to me – I’ve got to keep on improving all of the time. I’m not resting on my laurels – I’m going to keep on working hard to get to the top.

“Manev came to survive. Sometimes those guys just tuck up and they prepare themselves to take punishment. He was prepared to take shots and didn’t open up much. I kept my patience and I got the six rounds in. It was more about me showing I could keep up the work rate. I thought my punch selection was good. There are certain things to work on of course – we want to sit down on the shots more, but he didn’t open up for us much. It wasn’t much of a boxing contest. It was more of a war of attrition really. It was good to get in there and get the rust off.

“We’ve had one World Champion from Birmingham. We’re the second city and we’ve had one World Champion! We’ve never had a Heavyweight Champion, so that’s something I’m aiming to achieve. if I can bring that to Birmingham, big shows to Birmingham, it’s going to be huge for the city and hopefully they can get behind me and we can look forward to some big nights. I’ve boxed all around the world internationally for Team GB but boxing in my home city would make me massively proud.”

The 6ft 5ins 27-year-old, who is managed by Adam Morallee and Sam Jones of S-JAM Boxing, has been a regular sparring partner of Heavyweight World Champion Anthony Joshua, and shared sparring with Joe Joyce and Daniel Dubois ahead of their November clash.

In an impressive stint in the amateurs, Birmingham’s Dacres won a gold medal in the 2017 National Championships, before joining the Team GB squad in April 2017 and representing the British Lionhearts in the World Series of Boxing during a three-year spell in Sheffield.

“I turned over with my management team S-JAM Boxing and we were looking at getting a deal with the biggest promoter,” said Dacres. “Matchroom provide the biggest platform and the best networks to perform on and progress on. I’m really looking forward to working with the number one promoter out there.

“Being on the Team GB squad, I’ve sparred with Anthony Joshua for a number of years. It was regular sparring while he was in camp and I was training in Sheffield. It brought me on massively and improved me as a fighter. We’ve both been progressing over the years.

“That’s the level I’m looking to get to. I’ve seen the level that a Heavyweight World Champion performs at. With the same hard work and dedication that ‘AJ’ has displayed throughout his career, I’m confident I can reach those levels too.

“Sky Sports and DAZN viewers can expect to see a very explosive style from me. I’ve got fast hands for a Heavyweight and a lot of strength and power. I’d say that I’ve got a fan friendly style. I’m going to bring excitement.

“Next year I’m looking to settle myself into the professional ranks and get a few fights under my belt. I want to make a statement with some eye-catching performances on Sky Sports and DAZN. The ultimate goal is to become a Heavyweight World Champion.”

“I’m delighted to welcome another Heavyweight signing to the team,” said promoter Eddie Hearn. “Solomon has all the grounding through his GB podium squad experience and WSB experience and is ready to attack the domestic scene. It has been many years since the Midlands have produced a Heavyweight star and with the hope of crowds returning later in 2021, I expect Solly to be a popular draw as he begins his professional campaign.”

Adam Moralee commented: “All the promoters we spoke to about Sol were aware of his quality from Team GB and he needed no introduction. Sol is now in the hands of the people that have guided the career of one of the best Heavyweights ever to come out of Team GB and we are very excited about the journey ahead with Matchroom.”