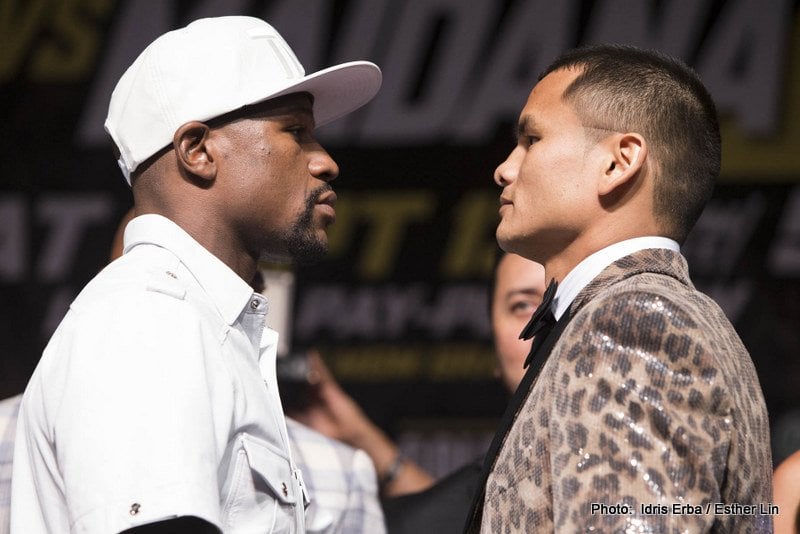 Here is what the fighter’s and their teams had to say Wednesday:

“Tunein and watch the fight because I’m going to be Floyd Mayweather and do what I do best and come out and win. I’ve been here before and I know what it takes to win at this level.

“I have to focus on my fight. I can’t focus on anything else going on, I have a tough fighter in front me and he needs all my focus.

“I know I’m almost 40, but I’m still going strong. I want to go out there and perform.

“The first fight was very interesting. Hopefully this time around the fight is even more exciting.

“Maidana is always in top shape. He absolutely deserves this rematch. I commend him for stepping up and making it happen again. I’m a true champion and a true champion never backs down.

“I need a knockout and I’m going for it. I need it to make a statement. First for myself, I want to do it for me.

“We sparred with some guys who have similar styles to Maidana’s. Guys who threw a lot of looping, wild shots. Very strong rugged guys. We had a lot of good solid work with these guys.

“I don’t condone what happened. If I offended anyone, I apologize. I have this tough, rugged fighter in front of me and that’s what I have to focus on. I’m not perfect, I make mistakes and I don’t condone that at all.”

“I just know that I have to win. I’m concentrated on winning. I am going to take out any doubts in my mind about the first fight. I’ve adjusted now and I think I’ll be ready.

“I haven’t talked to Carlos Rios or Carlos Baldomir about their Mayweather fights but I have watched their fights. I noticed that being aggressive and attacking him is what makes him uncomfortable.

“I think I did get tired in the first fight. I have to pace myself a little better and this time around I will be better.

“I have to use my distance a little more and pick and choose my punches. I wasted too many punches last fight. I have to work my distance correctly and get leverage.

“I think Floyd got pressured by the press and I think that he knows the first fight was close so he’s giving me the rematch and I have to take full advantage.

“I actually had two full months to prepare this time. I worked very hard and that’s probably why I look a little skinnier this time.

“I think Floyd is going to run but I’m going to have to do a good job of cutting off the ring.”

“We’re expecting a very exciting fight in this rematch; both guys have a tremendous amount of confidence and had excellent training camps leading up to the fight.

“Marcos Maidana is coming in really believing he is going to win this fight.

“You can’t say enough about Floyd Mayweather. He’s become the face of boxing and often he is the guy who wears the target on his back. No matter what he does people tend to form an opinion, but that comes with the territory.

“Floyd has had a phenomenal career, he’s the best fighter in the world and he’s been a world champion since 1998. He’s beaten a number of world champions and in my eyes he will go down as the best to ever do it.

“Floyd has made several hundred millions of dollars, but money doesn’t motivate him. He’s able to get up in the wee hours of the morning, putting in the groundwork like he’s never earned a dime.

“He has a tremendous dedication to the sport and we will all miss him when he’s not fighting. When he goes into that ring he gives it his all and he’s dominated A-level fighters and made them look ordinary.

“The fans demanded the rematch and Floyd said no problem, lets put him in there. If the fans didn’t think I got it right the first time, I will this time. There will be no more questions left unanswered after the Mayweather-Maidana rematch.

“What other athlete in sports can you say, that has dominated everyone in front of him for so many years? We must find a way to acknowledge greatness when we see it. There will never be another fighter like him.”

“All games aside, we’re ready for this fight. We’ve prepared like never before. We know it’s not an easy fight but it’s not impossible either.

“Marcos dominated for half the fight last time before he slowed down a little and sort of faded. He didn’t quite have the energy to do what he wanted for 12 rounds.

“The difference for this fight is that we had eight full weeks of training and not just five. He had more sparring, much better sparring.

“Mayweather is a great fighter, one of the greatest of all-time. I don’t think age has caught up with him. He has always taken such good care of his body. He works very hard. He’s still got that quickness.

“Mayweather’s a smart guy. I think he’s just politicking when he keeps complaining about Maidana being dirty in the first fight.

“Chino gained a lot of confidence in the first fight. That’s a big plus going into the rematch. He feels stronger, mentally and physically. He’s ready to do what he couldn’t quite do last time and that’s fight his fight for 12 rounds.’’

“Marcos gave Floyd probably the toughest fight that he has had in the last couple years. But, that’s what makes Floyd so great. He does things that people don’t expect him to do in boxing. I know that Floyd has proven everyone in this room wrong at least once.

“I know personally he has proven me wrong ever since he fought Oscar De La Hoya. Every single fight I’ve thought to myself, ‘Ok, this time we’ve got him’. That’s what makes Floyd great. Everyone has criticized him and said that he wouldn’t get past the likes of Ricky Hatton, Canelo or Victor Ortiz, but he has beaten them all.

“I also know that Marcos is a very hungry fighter that felt that he was very, very close to beating Floyd Mayweather. He is here to prove that whatever it takes, any little inch that he needs more to beat Floyd, he will make it happen this time.’’

“We’re thrilled to be back here at MGM Grand again, this has become SHOWTIME’s home away from home. This is our fourth event that SHOWTIME is televising from this venue this year, the most of any venue and the sixth in the past two years.

“There’s no doubt that this Saturday ‘Mayweather vs. Maidana 2’ will be most likely the biggest fight of the year.

“No matter what the result is, I guarantee that the fight will be historic. Historic because what we are watching will be unprecedented. We all know about Floyd’s success, undefeated record, fighter of the year awards. But consider this, Floyd Mayweather has been ranked in the top-10 by Ring Magazine consecutively and continuously since March of 1998. He’s been in the top10 for 16 years which is unprecedented in another sport, and that’s not to mention multiple years of being the consensus pound-for-pound king.

“But to be candid, Marcos Maidana couldn’t care less about Floyd’s accolades. Back in May, Maidana gave Floyd perhaps the toughest fight of his career, 12 grueling hard- fought rounds. Then Floyd surprised many of us by saying he wanted the rematch. Maidana is one of the most accomplished fighters that Floyd has ever fought, and personally I can’t wait.’’

“We’re excited for this highly anticipated rematch. Floyd Mayweather will look to push his undefeated record to 47-0. We all know this will be another hard test as Marcos Maidana looks to avenge his hard-fought loss back in May.

“Las Vegas frequently plays host to a number of large number of major sports and entertainment events. This weekend MGM Resorts will once again play a critical role in the Las Vegas experience as we celebrate Mexican Independence Day weekend.”

“We are honored and elated to regulate this great fight. I want to thank everyone involved for putting on this electric and exciting fight in the fight capital of the world.

“I would like to recognize Mr. Mayweather and Mr. Maidana and all the fighters who will be putting forth a gallant effort come this Saturday night. Without them this event would not be possible and I would like all the fighters to know that we wish them all the very best. ‘’