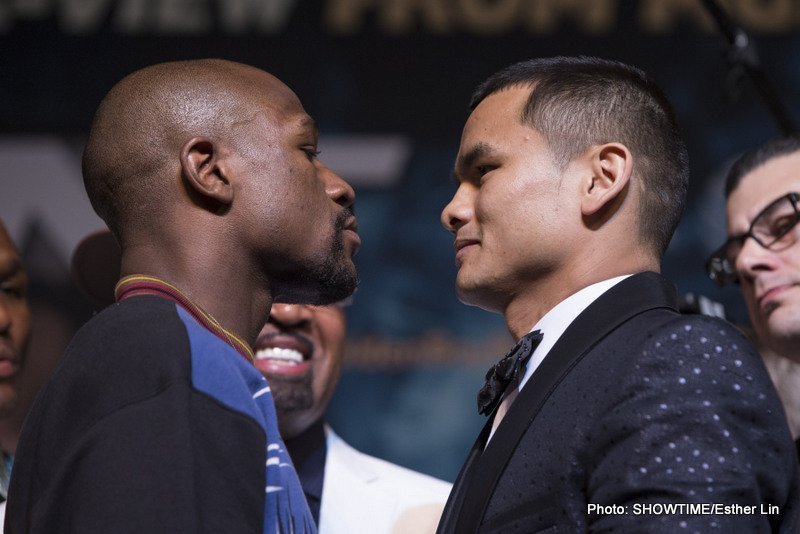 LAS VEGAS (Sept. 9, 2014) – With weeks of hard training behind them, we enter fight week for Floyd “Money” Mayweather and Marcos “El Chino” Maidana at MGM Grand in Las Vegas.

Take a look back at some of the best verbal sparring that has gone on between Mayweather, Maidana and their camps:

“My hand got raised so I don’t need to make any adjustments. He needs to make some major changes and probably get a new trainer if he wants to have a chance against me.”

From his media conference call:

From his media day:

“Watching a fight from the outside is totally different than from what’s going on in the inside. He may have been attacking but I was countering, throwing body shots. That affected his thought process and he fought different after that.”

“Floyd can say whatever he wants about me. He knows that I gave him the toughest fight of his life. The only difference is this time I will knock him out.”

From his media conference call:

“This time around I’m training to win. I know what to expect. I know Mayweather now, his style, what he brings to the table. I’m coming to win. I have more concentration, no excuses whatsoever.”

From his media day:

“Right after the fight, I honestly felt that I had won. I was the aggressor and the one looking to attack. But, the judges saw differently but I am still happy with the way I fought. I absolutely thought I won the first fight, and I will win again on Sept. 13.”

“The last fight produced a winner, MAYHEM will produce a champion.”

“Floyd is not about crying and complaining, but a lot of these situations with dirty fighters that come up, he just takes the high road to it. He preaches all these kind of things to members of his team, people in camp; it’s all about just being positive and turning a negative situation into a positive.”

“Maidana has done a lot of trash talking because of that supreme confidence that he has. He is going to come in tremendous shape and Floyd will have his hands full. It’s going to be great. This fight will be better than the first fight.”

“You’ve been bringing up stories about dirty fighting, dirty this, dirty that. Guess what? This fight is going to be rougher for you. You better be ready.”

“Maidana is going to come in with an aggressive style that nobody, not even the best boxer can get away with, and Mayweather’s not going to get away with it.”

“I don’t like the way that Floyd talks about my fighter. On the media tour he was telling everyone that my fighter fights like an MMA fighter and was constantly disrespecting him and I didn’t appreciate that.”