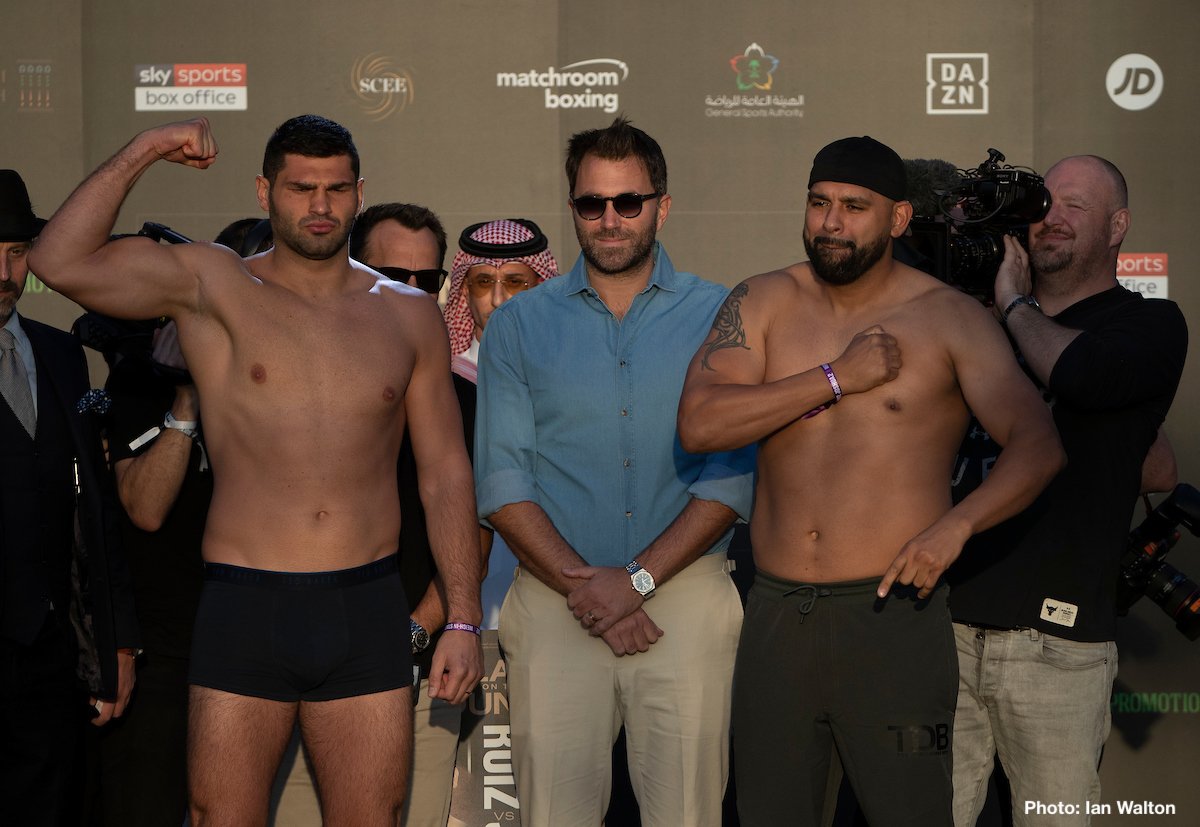 Hrgović, who fights on the undercard of the huge heavyweight rematch between Andy Ruiz Jr and Anthony Joshua, tipped the scales at 109.32 kg, while his opponent Molina came in heavier at 112.49 kg.

“I feel very good,” said Hrgović. “This is my biggest fight so far but I believe 100% that I can beat him if I put in my very best performance. I don’t think it will be easy but I am ready. I can throw a lot of punches, I have fast hands and I can take a punch, if necessary. I know I have the skillset to win.”

Hrgović is backing Joshua to regain his belts in Saturday’s main event, and having already earned top ten rankings, the 27-year-old is aware his World Title shot could come soon, but acknowledges first he must get past Molina.

“I think Joshua wasn’t himself in the first fight,” he says. “You could see he was under pressure. I think the things around him, the money and fame, took a part and he lost focus. Now, I think he has that back and he will win the rematch and show that he is a big champion. If he doesn’t win, I expect him to retire.

“In boxing anything can happen. Andy Ruiz was only one place ahead of me when his chance came and he took advantage of it. I’m already top ten in the rankings so my chance could come very soon, but first I must win on Saturday.”

“Filip looks in great shape,” said promoter Nisse Sauerland. “He is fully focused and ready to go. This is a great opportunity for him to announce himself on the World stage. We believe he is the best fighter in the heavyweight division and tomorrow night he has the chance to show that.”

Filip Hrgović (9-0, 7 KOs) came face to face with his opponent Eric Molina (27-5, 19 KOs) for the first time at today’s ‘Clash On The Dunes’ press conference at the Diriyah Arena in Saudi Arabia ahead of Saturday night’s historic boxing event.

Hrgović, who won Bronze at the 2016 Olympics in Rio, continues his global tour of 2019 by boxing in a third different country, having already claimed memorable knockout wins over Gregory Corbin and Mario Heredia in the United States and Mexico earlier this year.

The 27-year-old, defending his WBC International Heavyweight crown, must now overcome his toughest career test as he goes in search of his tenth professional victory against the former two-time World Title challenger Molina.

“I’m feeling very good and I’m ready for my biggest fight so far. Thank you to Matchroom Boxing, Eddie Hearn, Team Sauerland, Zeljko Karajica, Sky Sports and DAZN. It’s an honour for me to be part of this great event.”

The experienced American Molina has already fought twice for the World Heavyweight title, facing both Deontay Wilder and Anthony Joshua, and is confident his resilience can see him cause an upset on Saturday night.

“This is an iconic sporting event. An iconic rematch,” said Molina. “I’m extremely thankful to be part of this event. When you start your career 0-1 this is all just a bonus, it’s just beautiful to experience.”

The Croatian heavyweight sensation known as ‘El Animal’ is putting together an impressive resume after nine fights, and promoter Nisse Sauerland believes Hrgović is already the biggest talent in boxing’s glamour division.

“The biggest problem we have with Filip is finding heavyweights that will fight him,” said Sauerland. “Eric looks in great shape and we look forward to seeing his performance on Saturday, but I believe Filip is the best heavyweight out there.

“It’s great to be back in Saudi, last time I was here the crowd was great and I expect the same on Saturday night. I’m looking forward to showcasing Filip on such a great event and we are excited to end this years world tour with a big bang!”

Eddie Hearn for Matchroom Boxing says he is excited to see the 27-year-old Croatian in action in Saturday’s intriguing heavyweight clash.

“Filip Hrgović is one of the top young fighters coming through in the division right now. He was an outstanding amateur and he has great skills and a great team. I am delighted to be working with Team Sauerland co-promoting Filip and he’s up against a fighter who believes this is his time to relaunch himself on the world heavyweight scene.”

Filip Hrgović (9-0, 7 KOs) steps up to face former World Title challenger Eric Molina (27-5, 19 KOs) as part of a colossal night of boxing at the Diriyah Arena in the Kingdom of Saudi Arabia on Saturday December 7 featuring the Unified Heavyweight World Title rematch between Andy Ruiz Jr and Anthony Joshua, shown live on Sky Sports Box Office in the UK and DAZN in the US.

The Rio 2016 Olympic bronze medallist, who will be defending his WBC International Title, has made a blistering start to his professional career, racing to nine wins from nine fights – with seven of those wins coming by knockout – since making his pro debut at the Arena Riga in September 2017.

Ranked in the top ten in the world with the WBC, WBA and IBF, the 27-year-old already finds himself being propositioned for a World Title shot having been matched aggressively from the very start of this career, landing the WBC ranking title with a sensational knockout win over Amir Mansour.

Molina, a two-time World Title challenger from Texas USA, has mixed it at the top of the Heavyweight division throughout his twelve-year career as a pro. His first World Title attempt came against WBC king Deontay Wilder in 2015 when he took ‘The Bronze Bomber’ nine rounds before succumbing to a stoppage loss.

A year later he traveled to the UK to face IBF ruler Joshua at Manchester Arena and was stopped in three rounds in what was ‘AJ’s’ maiden World Title defence. Fights against Terrell Jamal Woods and Dominic Breazeale followed in 2017 before Molina made his return in February earlier this year, outpointing Nick Guivas in Brownsville.

“I’m very honored to be a part of this great event,” said Hrgović. “It is a big step up for me in terms of the level of opponent and also the size of the event.

“The whole world will be watching and this is a big opportunity for me to showcase my skills. I would like to thank my team Team Sauerland, Zeljko Karajica and Eddie Hearn for making this possible.

“I’m expecting a hard fight. Eric Molina has fought two times for the World title. He rocked Deontay Wilder in their fight and almost knocked him down. He is a very dangerous fighter with a lot of experience. This will be a big step up in competition and I am expecting the hardest fight of my career.

“From the beginning, we have started with very strong competition. I have told my promoter Team Sauerland that I am ready for anyone in the world and I have always wanted to fight the best so I’m excited for the challenge.

“Everything is perfect in training. I am getting stronger and better with every camp. Pedro Diaz is a great coach and I think we are a very good team. With every camp I see more and more of his knowledge and experience. I am very happy to be here training with him and I think he is bringing out the best in me.”

“I am beyond excited to be a part of this amazing boxing event in Saudi Arabia,” said Molina. “I am grateful to finally be back in the ring and I know exactly what this fight means. Eddie Hearn has given me more than enough time to be physically, mentally and spiritually ready for Hrgović.”

Promoter Nisse Sauerland said: “Filip is the fastest rising star of the heavyweight division so it is fitting that he play a part in this massive night for heavyweight boxing. This is a huge opportunity with the whole world watching and a chance for him to further his World title claim with a win over Molina.”

Russian powerhouse Alexander Povetkin (35-2, 24 KOs) is also confirmed for the undercard as he returns from his August triumph over Hughie Fury to take on USA’s Heavyweight talent Michael Hunter (18-1, 12 KOs) in an Eliminator for the WBA World Title.

“The world will stop on December 7 to watch Ruiz vs. Joshua 2 and now they have more mouth-watering action to whet the appetite,” said Eddie Hearn. “Povetkin vs. Hunter is a brilliant match up with both men looking for a crack at the World Heavyweight Title in 2020 and unbeaten Hrgović makes his first step up against World Title challenger Eric Molina.”