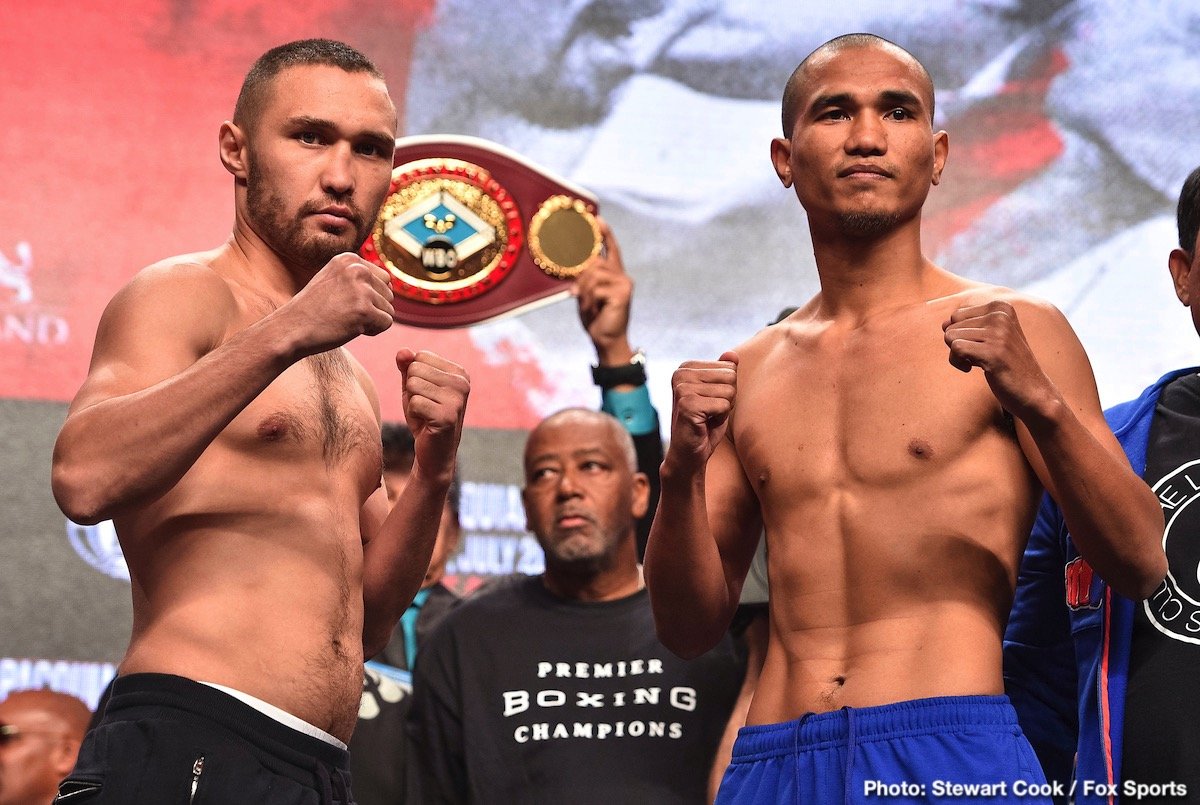 John Molina Jr. Withdraws from Match with A Back Injury

LAS VEGAS (July 19, 2019) – Hard-hitting Filipino welterweight Jayar Inson has stepped in to battle former world champion Sergey Lipinets in a 10-round fight on the undercard of the Manny Pacquaio vs. Keith Thurman WBA Welterweight Championship showdown headlining the PBC on FOX Sports Pay-Per-View event this Saturday night at the MGM Grand Garden Arena.

John Molina Jr. was originally scheduled to face Lipinets and withdrew from the bout due to a back injury. He was coming off a close unanimous decision loss to Omar Figueroa in February.

The 28-year-old Inson (18-2, 12 KOs) is coming off a split-decision loss to Jonathan Steele at MGM Grand in Las Vegas on the undercard of the Manny Pacquiao vs. Adrien Broner on January 19. The southpaw is from Davao City, Philippines and was schedule to fight Mexico’s Mahonri Montes in an eight-round bout on the off-TV undercard.

Lipinets (15-1, 11 KOs) is coming off a “Fight of the Year” performance against former two-division champion Lamont Peterson in March. A former 140-pound world champion from Kazakhstan, who grew up in Russia and now lives in Los Angeles, Lipinets pulled off an impressive 10th round TKO victory over Peterson in March in one of 2019’s best fights.

The stacked card is the perfect accompaniment for the summer’s biggest fight, which will pit boxing’s only eight-division world champion and Philippine Senator Manny “Pac Man” Pacquiao against undefeated WBA Welterweight World Champion Keith “One Time” Thurman in a powerhouse 147-pound showdown in the main event. This high-stakes match will firmly give the winner a claim for the top spot in one of boxing’s deepest and most talented divisions.

Tickets for the event, which is promoted by MP Promotions, Mayweather Promotions and TGB Promotions, are on sale now and can be purchased online through AXS.com, charge by phone at 866-740-7711 or in person at any MGM Resorts International box office.

“MP Promotions is proud to be co-presenting this all-action undercard with PBC and FOX Sports,” said Sean Gibbons, President of MP Promotions. “It will be a historic night of boxing, spanning many platforms and this is the type of PPV undercard that is jam packed with top-flight boxers. When you look at the fighters involved in supporting what is the best biggest fight of the year – Pacquiao vs. Thurman – you can be assured that the night will be filled with non-stop action.”

Figueroa (28-0-1, 19 KOs) is a come forward boxer-puncher who’s yet to meet an opponent who could slow down his relentless style. The 29-year-old from Weslaco, Texas, is coming off a unanimous decision victory over John Molina Jr. in February on FOX. A former lightweight world champion, Figueroa owns victories over former world champions including Robert Guerrero, Ricky Burns and Antonio DeMarco.

The 32-year-old Ugás (23-4, 11 KOs) has been one of the busiest welterweight contenders in boxing the last two years, fighting three times in both 2017 and 2018. Ugás, who is from Santiago, Cuba and now lives in Miami, Florida, was on an eight-fight win streak before losing a narrow split-decision to Shawn Porter in a world title fight on FOX in March.

“I’m very excited to be on the biggest card of the year,” said Ugás. “Omar Figueroa Jr. is a tremendous fighter, and that’s the style I like to face. I’m an all-action fighter and the fans are going to be in for a full course meal before the actual main event. That I can promise. You don’t want to miss this event and you don’t want to miss this war. I’m grateful to FOX Sports and PBC for including me in an event of this magnitude.”

The 30-year-old Lipinets (15-1, 11 KOs) made a successful debut at 147-pounds in March with a TKO victory over former two-division champion Lamont Peterson in a PBC on FS1 fight that is an early Fight of the Year frontrunner. Lipinets, who was born in Kazakhstan, grew up in Russia and now lives in Los Angeles, has only one loss on his record. He lost his 140-pound belt in a 2018 showdown against four-division champion Mikey Garcia.

“There’s no slowing down in my march to get that welterweight championship belt,” said Lipinets. “As always, I’m fighting a guy that is very dangerous and tough to the last bell. My title shot is right around the corner. I’m very excited to be part of a show like this and I’m grateful for these opportunities in my career and I promise that I’ll earn my keep. I’m looking forward to becoming a two-time world champion.”

Nery (29-0, 23 KOs) is a power puncher and has stopped his last 10 opponents and 14 of his last 15. He scored a TKO victory over Shinsuke Yamanaka for the world bantamweight title in 2018. The 24-year-old southpaw from Tijuana, Mexico is coming off a dominant stoppage victory over McJoe Arroyo on the March PBC on FOX Sports Pay-Per-View.

“I am thrilled to be back on a PBC on FOX Sports Pay-Per-View event and to be fighting on a card with my friend, Senator Manny Pacquiao,” said Nery. “To fight in Las Vegas has been a dream of mine since I turned professional. All the great Mexican fighters have fought in the fight capital of the world. My fight against Juan Carlos Payano is the last step to me getting my shot at the WBC championship and getting my belt back. Viva Mexico!”

Payano (21-2, 9 KOs) is coming off a unanimous decision victory over then-unbeaten Damien Vazquez in October on FS1. It was a bounce back victory from his loss to Naoya Inoue in a world title match last October. The only other loss in the career of the 35-year-old from La Vega, Dominican Republic came in another world title match, when he dropped a majority decision to Rau’shee Warren in 2016, after previously beating Warren for the title in 2015.

“Manny Pacquiao has been my favorite fighter since I’ve been a pro and I’m very excited to be fighting on this pay-per-view,” said Payano. “I even nicknamed myself ‘Baby Pacquiao,’ so this is a special honor. Fighting Luis Nery is also a great opportunity for me. Luis is a very hungry, strong fighter looking to regain his championship status. Unfortunately, he is not going to do that with me. I’m sure he will be ready and come for war, and so will I.”

An exciting array of undercard attractions will support a blockbuster night of boxing on Saturday, July 20 from the MGM Grand Garden Arena in Las Vegas including once-beaten prospects Austin Dulay (13-1, 10 KOs) and Justin Pauldo (12-1, 6 KOs) battling in an eight-round lightweight fight.

Tickets for the event are on sale now and can be purchased online through AXS.com, charge by phone at 866-740-7711 or in person at any MGM Resorts International box office.