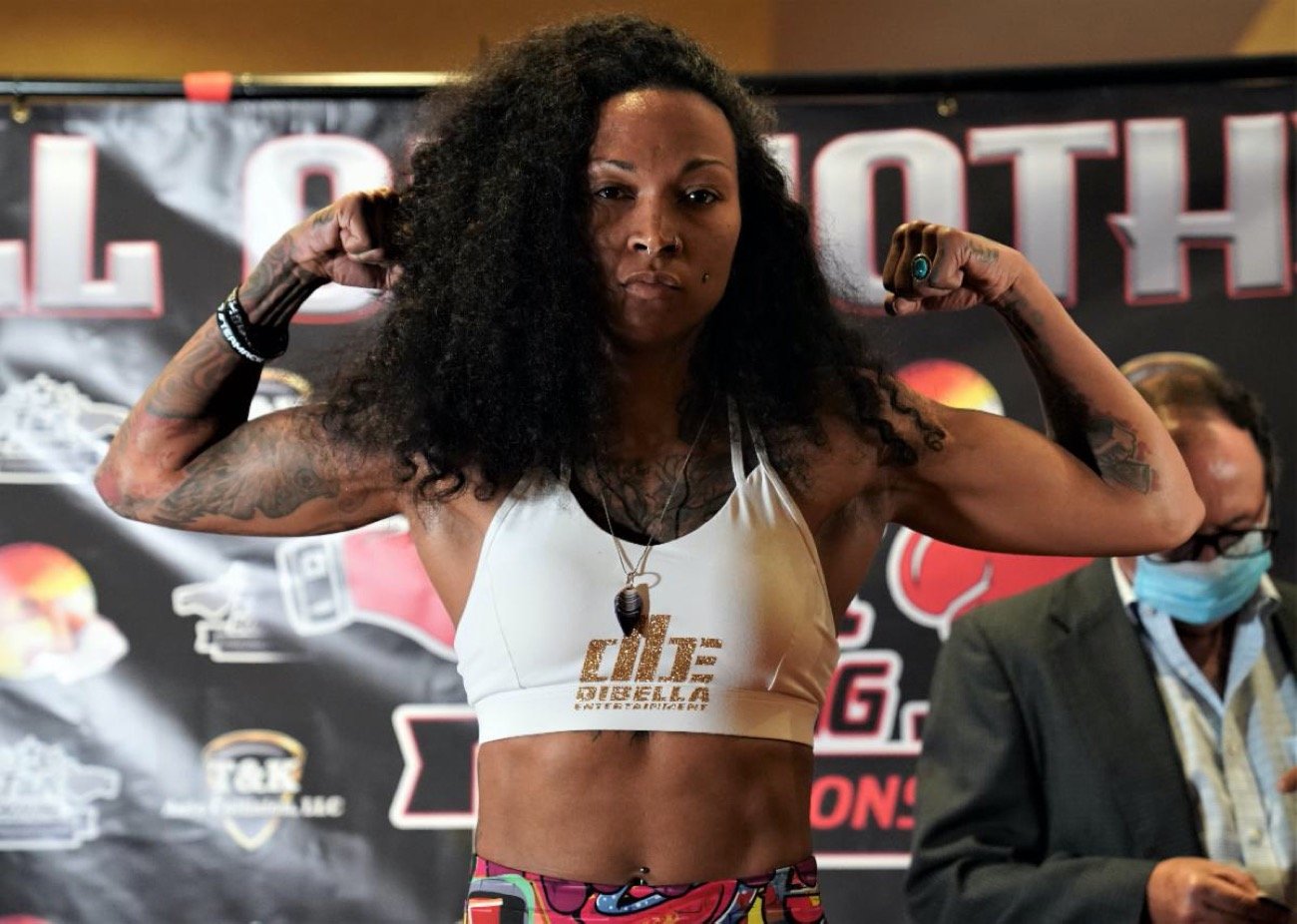 Tonight, two members under the Split-T Management banner will be in action at the St. Petersburg Marriott Clearwater in Saint Petersburg, Florida. Photos By Damon Gonzalez / Latinboxsports.com

Reis of Providence, Rhode Island has a record of 16-7-1 with five knockouts, and will look to become a two-division world champion, Reis is the former WBC Middleweight champion. She won that title with a 10-round split decision over Maricelo Cornejo on April 16, 2016 in Auckland, New Zealand. Reis has won three in a row, which includes a unanimous decision over Patricia Juarez on August 29, 2019.

Wyatt of Calgary, Alberta, Canada has a record of 10-1 with three knockouts. Wyatt has won two straight and this will be her 2nd attempt at a world title.

Steen, 24 of Cleveland has a record of 14-0 with 11 knockouts. The four-year professional has wins over Carlos Ruiz (8-2) and Gorjan Slaveski (5-0). Steen is coming off a 1st round stoppage over Kenneth Council on February 8th.

De Angel of Barranquilla, Colombia has a record of 22-12-1 with 20 knockouts. He has a win over Jose Pinzon (25-6), and he has also faced world champions Gilberto Ramirez, Austin Trout and Caleb Plant.

Both bouts can be seen Saturday on Impact Network (10:30 PM ET)

At Thursday’s weigh-in, both Reis and Wyatt weighed 139.2 lbs.

Impact Network will automatically become a player in the world of boxing with a reach of over 90 million households in the United States. The outlet will also provide an opportunity for some of the biggest and best promoters in the world to not only be able to build their talent, but also to give a home for their fighters instead on having to compete on another promoter’s affiliated platform.

The fight on Saturday is no exception as Hall of Fame promoter Lou DiBella will stage the world title card.

“This is a great opportunity for the many high-quality fighters and promoters that have been shut out of dates because they aren’t signed to a particular promoter or outlet. Many of these companies can’t survive without any type of output deal, site revenue and sponsorships to showcase their fighters. There are not enough dates to go around for the other promoters, who themselves have great fighters. I’m grateful to have a Hall of Famer like Lou DiBella be involved with this show, and the support we are receiving from the entire boxing industry. Lou’s track record goes without saying, and he has a great roster of fighter’s that will appear on Impact. Impact was scheduled to put on 12 shows in 2020, unfortunately they were knocked out the Covid-10 Pandemic. We are committed to 24 shows in the next year, so that will provide a great opportunity for these promoters to be able to not only survive, but to thrive in promoting their fighters in competitive bouts,” said Steven Marcano, of the SMH Group, the programming partner with Impact Media Group

“Any outlet that is willing to put on great shows and is cost effective is good for the business. There is a scarcity of platforms for fighters. Impact can provide those opportunities. Saturday’s main event is a world title bout featuring Kali Reis, who fought on HBO and most people thought beat Cecilia Braekhus. Isaiah Steen is one of the top prospects and can generate interest from the urban market. Elvis Garcia was a Mexican Olympian who was the main sparring partner for Anthony Joshua and the opener will have Jeremiah Milton, who was a major United States amateur in his own right. This is a show with a lot of talent that is headlined by a female world title bout. These are great shows. Even better is that Impact is on free cable. It is on most cable and satellite providers, and it is a tremendous opportunity for these fighters to get great exposure,” said Hall of Fame Promoter, Lou DiBella of DiBella Entertainment.

Rising, unbeaten super middleweight prospect Isaiah “Zwop” Steen (14-0, 11 KOs), of Cleveland, OH, has been added as the co-featured bout of Friday’s IMPACT Championship Boxing event, which is brought to you by T&K Boxing Promotions in association with DiBella Entertainment. The card, headlined by an exciting women’s world title fight between Kali Reis and Kandi Wyatt, takes place this Friday, November 6, from the St. Petersburg Clearwater Marriott, in St. Petersburg, FL, and will premiere on IMPACT Network, Saturday, November 7, at 10:30pm ET.

Fighting in the six-round co-main event, Steen faces hard-hitting Colombian Juan De Angel (22-12, 20 KOs), from Barranquilla. Co-promoted by DiBella Entertainment and Holden Productions, and managed by Split-T Management, Steen is coming off of a first-round knockout win against Kenneth Council on February 8. Steen and his half-brother, super welterweight contender Charles Conwell, were scheduled to share the spotlight last month on SHOWTIME’S “ShoBox” series, but Steen’s bout was cancelled at the last minute when his opponent pulled out with an illness. Trained by Otha Jones and Roshawn Jones, the 6’2” heavy-handed Steen has stopped seven of 11 opponents inside the opening round. Steen began boxing at the age of seven and built an amateur record of 78-24, before his March 2016 pro debut.

In the main event, Kali “KO Mequinonoag” Reis (16-7-1, 5 KOs), of Providence, RI, will meet Kandi “Krush” Wyatt (10-1, 3 KOs), of Calgary, Alberta, Canada, in a 10-round clash with the vacant WBA world female super lightweight title on the line. The winner of this high stakes battle could be in line for unification matches against IBF champion Mary McGee or WBO champion Christina Linardatou.

Elvis Garcia (8-0, 5 KOs) will clash with Dell Long (7-6-2, 4 KOs), of Artie, WV, in an attractive six-round heavyweight bout. Born in Mexico, now living in Indio, CA, trained by Joel Diaz, Garcia returns to the ring following a victory against Hugo Trujillo. He also recently gained invaluable experience working as the “secret weapon sparring partner” that promoter Eddie Hearn referred to with regard to Anthony Joshua’s preparation for his rematch against Andy Ruiz last year. Prior to turning pro, Garcia was an outstanding amateur with a record of 85-10, 42 KOs. After winning gold at the Washington State Golden Gloves, as well as a silver and two bronze medals at USA National Tournaments, Garcia moved to Tijuana, Mexico, where he won the Mexican National Championships and the Mexican Golden Gloves Tournament twice. Long is coming off of an unexpected upset win against Don Haynesworth (16-4-1) on August 29, and he also owns a knockout victory against 13-1 Travis Clark.

Heavyweight prospect Jeremiah Milton (1-0, 1 KO), originally from Tulsa, OK, now based in Las Vegas, NV, will compete in a four-round bout against D’Angelo Swaby (1-1, 1 KO), of Nassau, Bahamas. Milton’s pro debut on August 20 lasted just 75 seconds, ending with a knockout of Dennis Vance Jr. As an amateur, Milton was a super heavyweight silver medalist at the 2019 US Olympic Trials. In preparation for his pro debut, Milton sparred with Luis Ortiz, Joe Joyce and Guido Vianello.