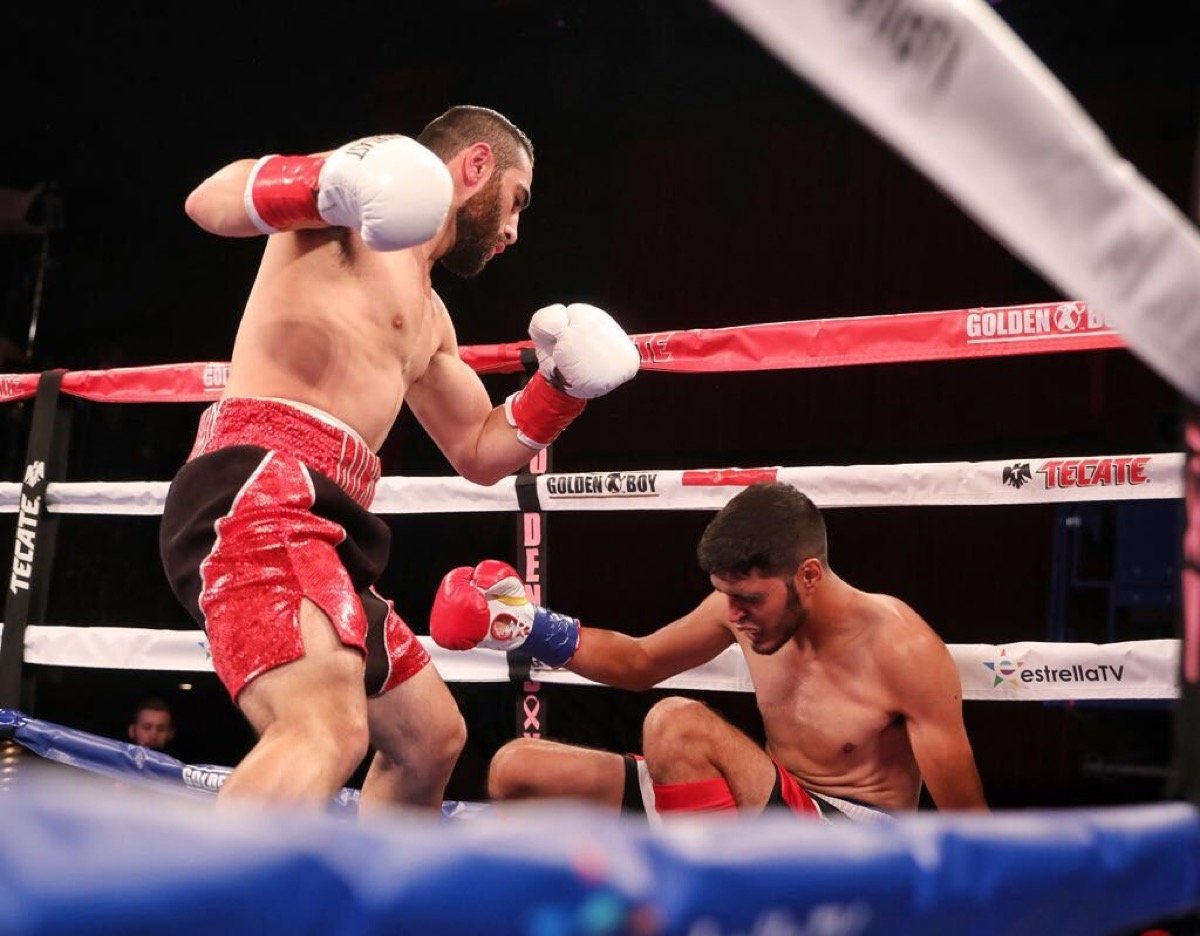 “I felt great. I never like to say that a fight is easy. I just make it look easy,” said Ferdinand Kerobyan. “I’m proud of my performance. I showed that I’m a warrior. I’m looking for bigger and better names. I want eight and ten round fights only.”

In the co-main event, Azat Hovhannisyan (15-3, 12 KOs) of Los Angeles, California bombarded Jesus Martinez (24-5, 12 KOs) of Monteria, Colombia with many shots en route to a technical knockout at :30 of the third round of a super bantamweight fight originally scheduled for eight rounds.

“I feel stronger than ever before,” said Azat Hovhannisyan. “Whatever has happened in the past is past. I’m ready for a world title fight. I know I still have a lot left in the tank.”

Richard Acevedo (4-0, 4 KOs) of Los Angeles, California conquered Javier Olvera (2-1, 1 KO) of Agua Prieta, Mexico via knockout in the first round. Acevedo landed a serious of vicious shots to the body, which forced the referee to stop the fight at 2:30 of the aforementioned round in a super welterweight clash initially slated for six rounds.

“I prepared really well for this fight. I like that I worked by jab in this fight. I’m going to look at it when I get home, review it and look to fix any mistakes. We are going to work to get better and better, said Richard Acevedo.”

Rudy Garcia (9-0, 1 KO) of Los Angeles, California defeated David Perez (10-5, 5 KOs) of Houston, Texas in a six-round super bantamweight fight via unanimous decision. Garcia won with one score of 59-56 and two scores of 60-62.

“I felt good and strong. There are a couple things to work on. He’s a tough guy and his right hook to the body is really accurate. I’m ready for any upcoming dates to make my return to the ring, said Rudy Garcia.”

David Mijares (6-0, 3 KOs) of Pasadena, California defeated Michael Meyers (2-1, 2KOs) of Los Angeles, California via split decision in a four-round super lightweight fight. One judge scored the fight 38-37 for Meyers, which was overruled by two scores of 38-37 for Mijares.

“I felt rusty. It was tough because he [Meyers] was throwing shots from strange angles. I think I’m ready for six-round fights. It’s definitely fun to be coming back. I love boxing, said David Mijares.

Kerobyan vs. Mendivil was an eight-round super welterweight fight presented by Golden Boy Promotions. The event was sponsored by Tecate
“THE OFFICIAL BEER OF BOXING” and Casa Mexico Tequila. The fights took place Friday, Oct. 12, 2018 at the Belasco Theater in Los Angeles.

Kerobyan is a 20-year-old native of North Hollywood, Calif. who is quickly moving up the 154-pound rankings. The quick-handed puncher fought six times in 2017, and he’ll continue his busy streak in 2018 as he participates in his fourth fight of the year on Oct. 12. Kerobyan is one of the latest prospects to join exclusive Golden Boy Promotions stable and the first fighter under the management of former UFC fighter and current WWE Superstar Ronda Rousey. Keroyban will look to add another win to his record in his first fight as the headlining attraction.

“I’ve been working very hard and staying very busy since making my professional debut,” said Ferdinand Kerobyan.”I’m happy I earned the opportunity to headline a card for the first time in a place I know I will fill with all of my supporters. I want to thank my team and Golden Boy Promotions for making this happen and I promise another exciting win.”

Mendivil is a rugged 22-year-old fighter of Sinaloa, Mexico, who is coming off a tough fight against another Golden Boy prospect in Aaron “Silencer” McKenna. This time, however, he’ll face off against Keroyban in an eight-rounder that will test both fighters before a packed crowd at the Belasco Theater.

“We have a serious undertaking against Ferdinand Kerobyan, who without a doubt will come in as the heavy favorite,” said Rolando Mendivil. “But these are the challenges I like to face because they require me to train harder and to apply myself more in the gym. I’m coming with everything against Kerobyan.”

In the co-main event, Armenian contender Azat “Crazy A” Hovhannisyan (14-3, 11 KOs) will return after his first title opportunity in an eight-round super bantamweight fight against Jesus Martinez (24-4, 12 KOs) of Monteria, Colombia.

Richard “Kansas Kid” Acevedo (3-0, 3 KOs) will return in a four-round super welterweight fight against a soon-to-be-announced opponent. A native of Garden City, Kansas, Acevedo is a member of the Westside Boxing Club in Los Angeles, where he is gaining a lot of attention fighting on Golden Boy Promotions events.

Kerobyan vs. Mendevil is an eight-round super welterweight fight presented by Golden Boy Promotions. The event is sponsored by Tecate “THE OFFICIAL BEER OF BOXING” and Casa Mexico Tequila. The fights take place Friday, Oct. 12, 2018 at the Belasco Theater in Los Angeles. The Boxeo Estelar broadcast will air live on EstrellaTV at 10:00 p.m. ET/7:00 p.m. PT. The card will also stream live on EstrellaTV.com and on YouTube via LBI Media, Inc.’s Fenomeno Studios.

Media interested in attending the Oct. 12 edition of LA FIGHT CLUB must be pre-approved for credentials. Credential applications are due Monday, Oct. 8 at 5:00 p.m., and can be found here. Submitting an application does not guarantee approval for a credential. You cannot transfer your credentials to someone else. Media will not be credentialed on-site, no exceptions.