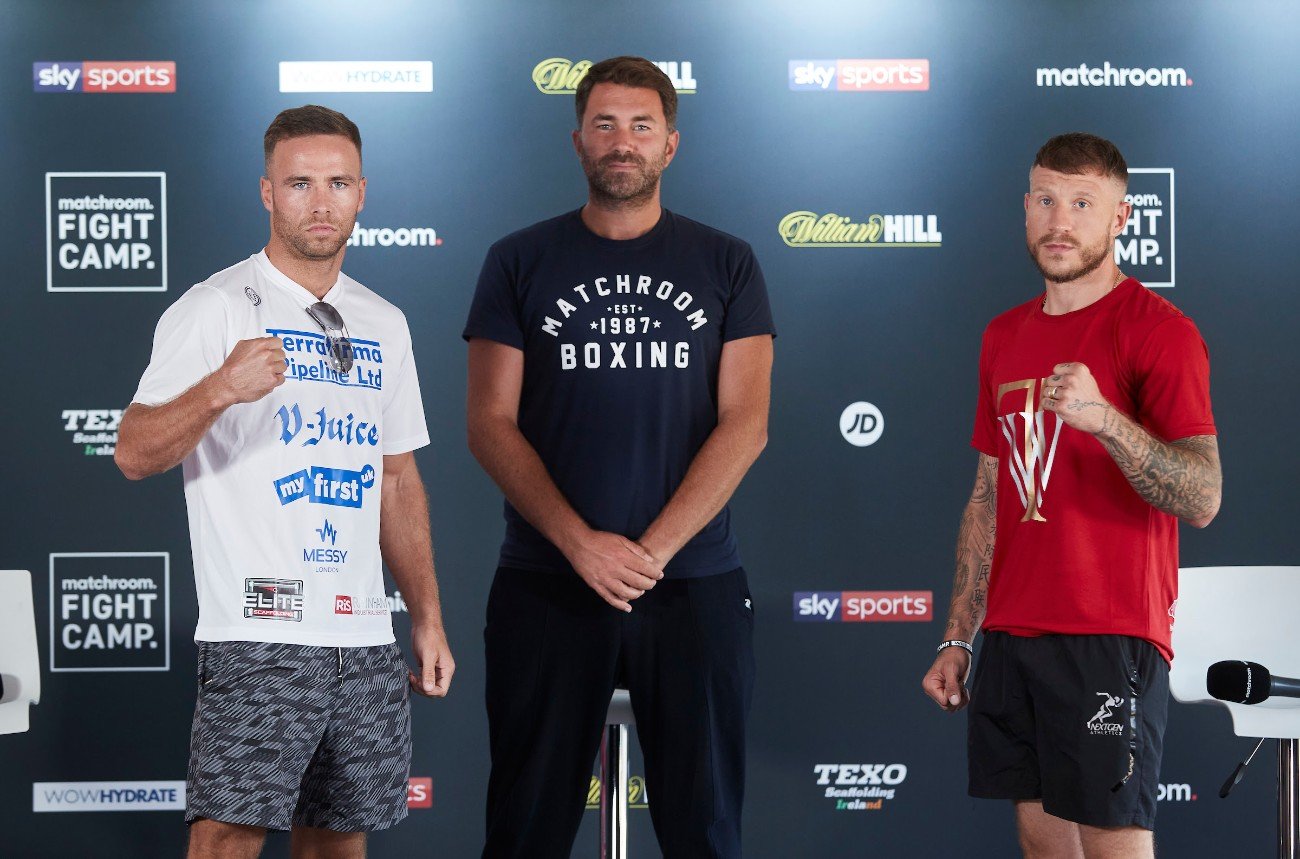 Eddie Hearn: “Thanks, Chris, thanks, Darren, and thank you, everybody, for tuning in across this stream, joining us on Sky Sports News and, of course, Matchroom Boxing socials as well. Wow. What a couple of weeks we’ve had. You know I was thinking the other day, Fight Camp is unquestionably the standout performer across all sports, in my opinion, not just boxing, but all sports coming out through lockdown. It has been absolutely fantastic, and I believe this week, we have the best week of the three so far from top to bottom. Compelling fights. We’re expecting a few thunderstorms; we’re expecting a little bit of rain, it’s all going to add to the drama of Fight Camp as it unfolds at Matchroom H.Q. this Friday live on Sky Sports in the U.K. and DAZN across America.”

“I’ve put my body through hell in this training camp. I’ve taken Anthony Fox very seriously. He’s a tough opponent, and I’ve not taken him lightly. Those boys he’s beaten in the past might have overlooked Anthony Fox. I’ve not overlooked Anthony Fox. I’ve put 100% into training. I’ve done more rounds of sparring in this camp. The boys I’ve been sparring are a lot better than Anthony Fox, and I’m handling them in sparring. I’m looking forward to fighting night and putting on a show. I’ve not taken this fight lightly. You’ll see that on Friday night. I’ll put on a performance. I’ll shine on Friday night, and I’ll show what level I’m at. There are levels to this boxing, and I’m levels above Anthony Fox. My amateur pedigree backs that up, but obviously, I’ve got to do that in the pros. I’m going to knock out Anthony Fox on Friday night. Mark my words, I will.”

“We’re focused on this fight. That’s it, really. I know he hits hard, but I hit hard as well. 100%, I don’t think it’s going eight rounds. Either I’m getting stopped, or he’s getting stopped. That’s it.”

“It’s a huge fight for me. I’m here to put a dominant display on. When people start talking about Cheeseman, Fitzgerald, and Fowler, my name is going to be in that mix every single time after a real strong dominant performance. A lot of people see me as the backup and on the sidelines. I’m here to prove that I’m the top of that list. I’m not here to make up the numbers. I want to end this fight inside the distance and make a statement. I do believe that I’m a level above Navid, but he seems to think that I’m overlooking him. I’m not overlooking him at all. I’m focused. I’m ready. If anything, he’s overlooking me. I’m really looking forward to it. The set up looks unreal. The Cheeseman rematch is definitely the one I want. I want to put the record straight.”

“I’ve had a great training camp, and I’m ready to take on Kieron and push on to more big fights. I can adapt to any style. I can have a war for sure. I don’t shy away from a battle; I can box as well. We’re going to do what we need to do to get the win. This is the best camp that I’ve ever had. I couldn’t ask for anything better. With the position that I’m in now, physically and mentally, I feel 100%. I feel super confident, and I can’t wait to get out there and showcase my skills. The Super-Welterweight division is booming, and there are some great fights to be made. Every one of those domestic fights will make for a great fight. Ted Cheeseman vs. Sam Eggington – what a fight that was! Anthony Fowler, what a great fighter he is as well. Get this win, and I’ll move into that mix.”

“I feel in the best shape of my life. I’m actually embracing the pressure. Pressure creates diamonds, and on Friday night, I will shine. I’ve had opponents before that haven’t brought the heat to me, and I may not have performed to the best of my ability. I know for a fact that Rachel will be my hardest fight so far, and because of that, that will bring out the best in me, and you will see the very best version of myself. I can’t take anything for granted. I can’t switch off. I’ve got to stay focused 100%. Camp has been the hardest camp I’ve ever had but the best camp I’ve ever had. The sparring we’ve had has been sensational. I’ve had girls, some taller than Rachel, some that want to fight on the inside and some that keep me long. We’ve had every type of sparring partner that you can imagine, and it’s the best that I’ve ever looked in the gym.”

“It’s a massive opportunity for me. I’ve come from fighting on small hall shows. I fought in Norway on a Team Sauerland show, which was a really good promotion. For me, it’s a massive opportunity, and I want to prove that I belong on this platform. It’s nice to be Rachel, the social worker when I’m at work, and then when I’m in the gym, I’m Rachel the boxer. I’m happy having that separation. Coming into this fight, a lot of people don’t know who I am, and that’s fine. I’ve got to leave everything in there. I can’t take a second off. I’ve really got to give everything I can. I’m feeling confident. Even with the global pandemic, I’ve had the best fight camp I could have ever had, and I’m feeling great. I’m in great shape. I’ve got all of the confidence in the world.”

Zelfa Barrett – Manchester, England – 23-1, 14 K.O.s – fighting Eric Donovan for the vacant IBF Intercontinental Super-Featherweight Title:
“I’m buzzing about this opportunity. Respect to Eric, I really appreciate him taking the fight. I’m under no illusion, he’s there trying to beat me, and I’m here to do a job on him—no disrespect to the guy. I’m going to look good doing it. The better he is, the better I’ll be. I’m ready. I’m excited. I’m ready to go to Ireland and back to beat this guy. I’ve trained too hard. I’ve dedicated my whole life to boxing. I’ve moved in with my Uncle Pat for this camp, that was the hardest! I’ve not come this far to be put aside. I’m here to stay. I’m going to be fighting for World Titles at the M.E.N. No disrespect to him, but he’s in my way.”

“I’m absolutely delighted to be here. Honestly, I’m very grateful for the opportunity. You’re dead right. I think in life, if you want to be successful, no matter what, you have to take risks. You also have to be able to back it up. You have to be good enough, and you have to prepare well. When this opportunity was presented to me, I knew that chances and opportunities for me are few and far between. Nobody has the balls to fight Zelfa at Super-Featherweight in Britain. So when Mark put it to me, I said yes Mark, I’ll step up to it, and I’ll take that because I see an opportunity. I believe in myself, and I believe if I can get a good camp, good preparation, then I can put in a good performance and win this fight. So far, we have done that. If I can perform to the best of my ability on Friday night, I think I can do enough to win.”

“Jason has been around. He’s a good fighter. He’s a strong fighter. I’ve got a lot of respect for Jason as a fighter. I believe I’m a level above him. I’m better than him, and I’m going to show that on Friday night. I’ve left no stone unturned. I haven’t overlooked Jason. I’ve done everything right in the gym, trained hard, and I’m ready to go on Friday night and move on after him, use him as a stepping stone to bigger and better fights. I’m planning to go all of the ways. I’ve got to be dealing with people like Jason. This is a big night for me to showcase my skills. This is what it’s all about. This is what boxing is all about.”

“I’m back at Middleweight, and I’m comfortable. I’m back enjoying the sport now. I had two losses at Light-Middle. I’ve had a few things going on in life, but I’m back here now, and I’m grateful for the opportunity. I’m looking forward to experiencing Fight Camp. The key is with me is my strength. I’m a different fighter. I’ve had the wars, and I’ve had the tests, I’ve been there. We’ve got to put on a good fight, and I think it will be. With his style and my style, I think we’re going to clash. This is my time, and if I want to stay on these shows, I’ve got to win on Friday night.”