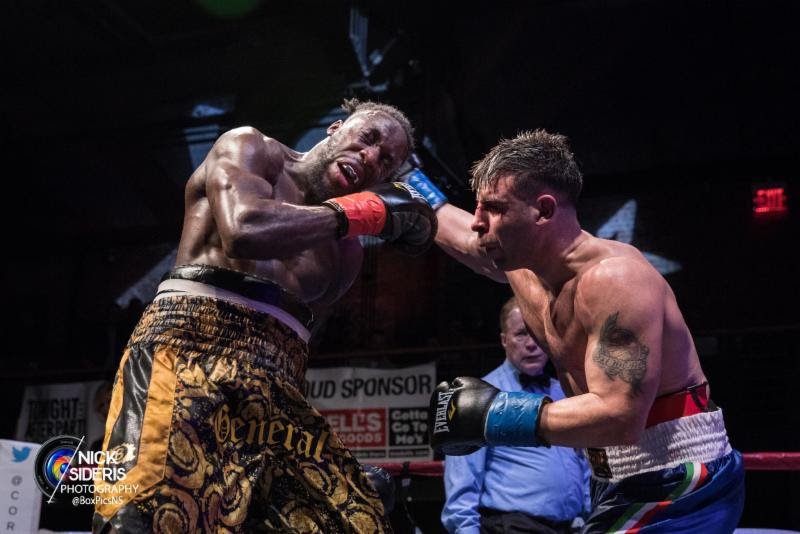 JOHNNY “HITMAN” HERNANDEZ (now 10-4 1KO) and MARQUIS “THE HAWK” HAWTHORNE found themselves in a tactical battle over the scheduled 8-round bout. From the first round on, both fighters continued to make in ring adjustments, seemingly trading rounds between in a good scrap. Hernandez found success using his speed and footwork to score on Hawthorne, however as the fight went on, Hawthorne (6-10 1KO), used his length to subdue Hernandez’s attack, in an effort to get to him first. At the finish of the competitive 8-round, contest, the judges’ scorecards read, 76-76, 77-75 (x2) as Hernandez outpointed the game Hawthorne by close majority decision.

Cruiserweights, JOEL “BIG JOE” DJEKO (now 15-2-1 7KO’s) and SIMONE “TYSON” FEDERICI (now 14-2-1 6KO’s) finally had the chance to glove up, and settle their differences in the ring, after Djeko pushed Federici at Thursday’s weigh-in. Federici came out of the gate strong, working effectively on the inside, landing a strong, short, combination that unsteadied the big Belgium. Djeko later returned the favor, with a vicious body attack on the Italian. The two continued to trade over the full 10-rounds in a fight that seemed very close. Upon the final bell the Italian jumped on the ring ropes assuming he won with his aggression. Ultimately the scorecards were read and the judges scored in favor of Djeko unanimously (97-93 (x2), 99-91). The fans in attendance voiced displeasure with the decision, but the commentators on Facebook seemingly thought Djeko had edged out the victory.

TERELL “THE PROBLEM CHILD” BOSTIC (now 4-1 1KO) of Wyandanch, Long Island took on JAVIER MARTINEZ (now 4-6 3KO’s) of Laredo, Texas. Bostic returned last night to The Paramount in search of vengeance for his first professional loss, by close split decision, at the last “Rockin’ Fights”. The two super lightweights waged war for the scheduled 6-round bout, as Bostic picked his spots, landing to both the body and the head of Martinez. Martinez however was not backing down, as he spent most of the bout coming forward in attempt to create openings. In the end, Bostic earned the unanimous decision victory by scores of 60-54 (x2) and 59-55.

DASHAUN “TOOSWEEET” JOHNS (now 2-0 1KO) showed extreme fortitude in his bout against DERON “KING” LAWSON. Lawson came on strong in the first round, getting the best of Johns, causing the Bronx native to be on unsteady legs for most of the three minutes. However, to Johns credit, he resisted the onslaught, and managed to finish out the round. A clear game plan change from John’s corner heading into the second round paid major dividends, managing to out box Lawson (now 0-3) for the remainder of the four rounds to a win a tough unanimous decision. All three judges scored the fight the same, 39-37.

ALEX “EL TORO” VARGAS (now 3-0 1KO), made his third straight appearance at The Paramount, against Ghana native, BENJAMIN BORTEYE (now 4-5 4KO’s) and did not waste any time. Vargas effectively cut off the ring, pinning Borteye in the corner, and landed a straight right, dropping Borteye early in the first round. Vargas continued the onslaught, dropping Borteye a second time in the second round. Vargas earned a TKO victory 3 seconds into the third, remaining undefeated in his young professional career, as well as at The Paramount.

In the opening bout of the evening, JEFFREY GONZALEZ (Pro-Debut) took on EARL HENRY (0-0-1) of Florida in a scheduled 4-round super middleweight bout. The crowd was filled with oh’s and ah’s as both fighters traded freely and fiercely at the center of the ring landing at will. After the full four rounds, Gonzalez notched his first professional win by scores of 40-36 (x3).

Star Boxing head, JOE DEGUARDIA had this to say about Friday’s entire “Rockin’ Fights” event, “It was another fun night at the Paramount and the fighters once again gave fans a thrilling action-packed night. We look forward to our next stop-March 9th when Joe Smith Jr., another Paramount favorite, gets his World Championship title fight vs Dmitry Bivol at Turning Stone Casino.”