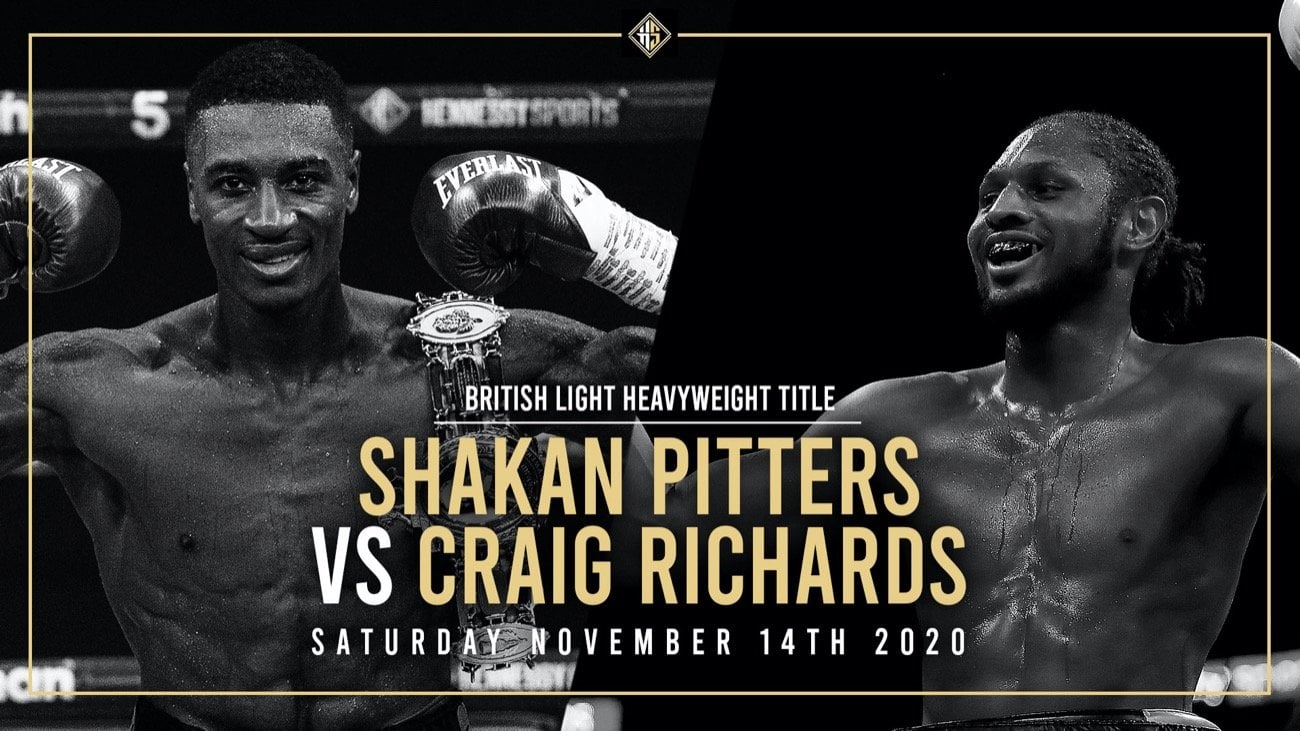 Following an injury sustained in training and on medical advice, British Light-Heavyweight Champion Shakan Pitters has had to withdraw from his title defence against Craig Richards on Saturday 14th November.

Promoter Mick Hennessy has managed to reschedule the highly-anticipated showdown for Friday 18th December to be broadcast live and exclusive on free-to-air Channel 5 in the UK.

Further details will be announced in due course with the full supporting undercard.

Remember the mega-fight between Gervonta Davis vs. Leo Santa Cruz is live on Channel 5 this Sunday morning at 2am GMT. The fight will also be made available on Channel 5’s streaming service My5 from 9am Sunday morning, as well as on ViacomCBS-owned Pluto TV in the UK.

The British Boxing Board of Control today confirmed that the fight has been confirmed and approved with the release of the latest Championship Circular with only the venue to be announced. Richards and his manager/trainer Peter Sims have also accepted the terms and agreed to the fight.

Newly crowned Pitters, who claimed the title with a decision over Chad Sugden last month, makes the first defence of his Lonsdale belt against his fierce London rival in a clash of styles that could be another potential fight of the year.

Hennessy said, “I’m delighted to announce that Pitters versus Richards is finally on and will be free to watch live on Channel 5. This is a great fight that the public really want to see and I believe we could be in for a real treat with these two proud warriors. Shakan isn’t taking an easy first defence and he said that he would put the title on the line against him first if he defeated Sugden and he’s done that. I know that Craig will be really up for the fight, he was devastated to pull out of the first fight and will now be desperate to get his hands on the British title. After the last two shows on Channel 5 with the barnstormers between Dilmaghani and Ziani and Fonseca, I have a feeling Pitters v Richards could match them.”

Birmingham’s ’Big Shak’ is cleaning up the domestic division after defeating Dec Spelman to win the English 175lb title in September 2019 and now has similar intents to make the Lonsdale belt his own property with three defences, starting with Richards. Standing at 6ft 6in, the towering Pitters, 31, has amassed a perfect 14-0 record with four knockouts since making his pro-debut in March 2017.

From Crystal Palace, Richards, 30, was originally due to face Pitters for the British title in March but withdrew due to a viral infection and Sugden stepped in. Following the outbreak of the COVID-19 pandemic and the ensuing lockdown, the Pitters-Sugden bout went ahead in August with Hennessy ensuring the winner faced Richards for the first defence.

A former Southern Area and WBA Continental Light-Heavyweight Champion, this will be Richards’ second attempt at the British title after he pushed then Champion Frank Buglioni the distance in October 2017 – and rocked Buglioni in the third round – when he took the fight at just five days’ notice.

Hennessy will release further details on the show next week with quotes from both camps.

British Light-Heavyweight Champion Shakan Pitters is set to defend his title on December 18 on Channel 5 as he looks to get the first notch on his prized Lonsdale Belt.

Pitters claimed the title with a clear points victory over tough rival Chad Sugden just over two weeks ago and was back in front of Channel 5 cameras last weekend as a special guest presenter on the thrilling Samir Ziani-Alex Dilmaghani European title fight.

Promoter Mick Hennessy has lodged the date with the British Boxing Board of Control and has proposed Craig Richards as the intended challenger for the title. Hennessy won the original purse bid to stage Pitters v Richards back in December with a substantial bid, but Richards withdrew from the contest after suffering from a viral infection.

However, Hennessy kept to his word that Richards would get the first shot at the winner and he has made a very good offer to Richards’ team that reflects the original purse bid. He is currently awaiting confirmation if they intend to accept the fight as the Board are meeting today to formerly sanction the bout. If Richards declines, then Hennessy has a number of options to move forward with.

Also set to feature on the card will be the return of cruiserweight hot-shot Isaac Chamberlain who has racked up two sensational quick fire KO wins in two weeks’ and is firmly on his comeback into championship contention.

Birmingham ace and former Love Island star Idris Virgo, who has also had two wins in the last two weeks’, including a sensational first round body shot KO win, will return to action.