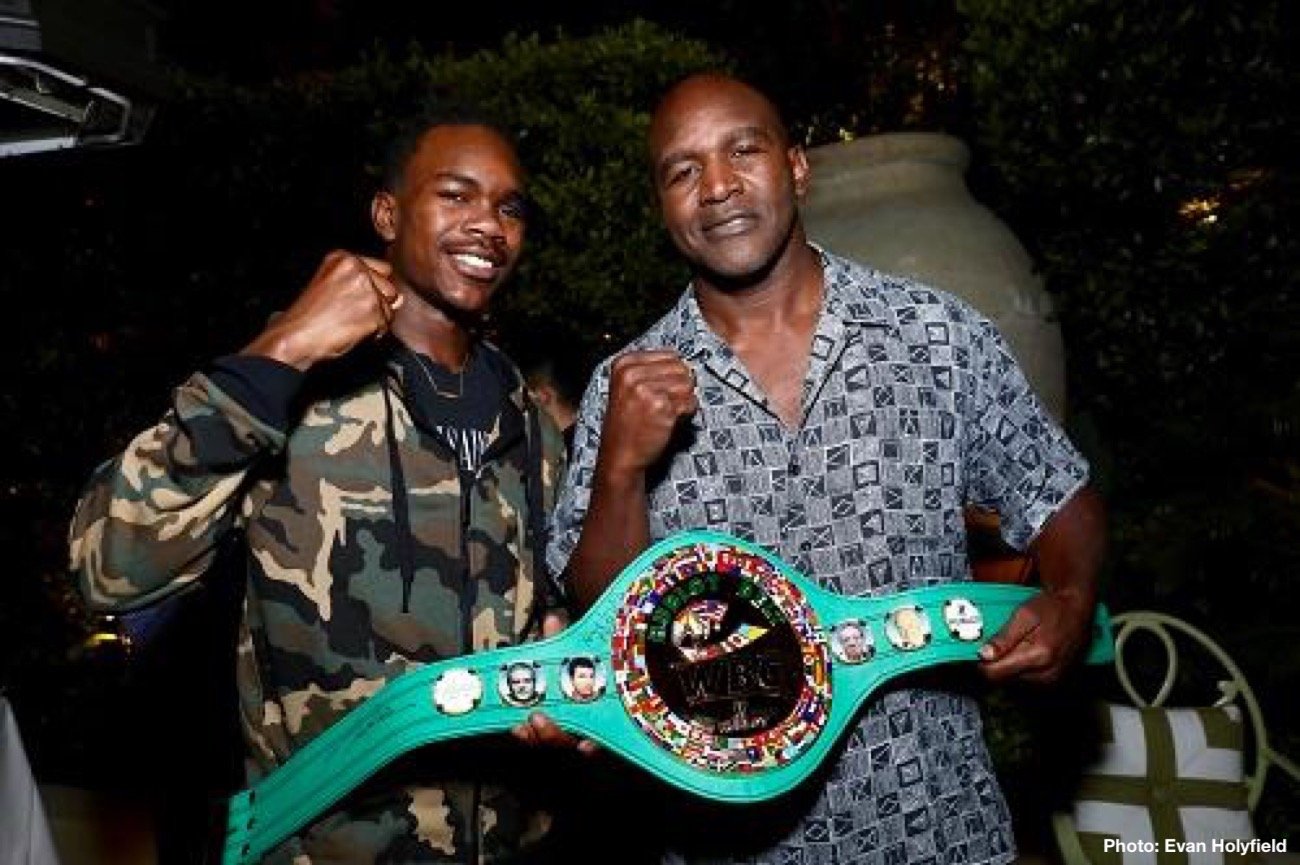 On November 2, before thousands of fans in attendance at the MGM Grand Garden Arena in Las Vegas, NV are treated to the most-anticipated fight of the year, the live audience will witness the professional debut of Evan “Yung Holy” Holyfield. The 21-year-old son of Hall-of-Famer and five-time world heavyweight champion, Evander “Real Deal” Holyfield, will face Nick Winstead of Abita Springs, Louisiana in a 4-round junior middleweight matchup on the undercard of Canelo Alvarez vs. Sergey “Krusher” Kovalev.

Evan is the middle child of the 11 Holyfield children and older brother of Carolina Panthers running back Elijah Holyfield. As an amateur, Holyfield amassed over 80 fights including the Semi-Finals for the US Team. Standing 6’1.5″, Evan is extremely athletic, a boxer-puncher with lightning fast speed and hard-hitting power.

When asked about debuting on the biggest fight card of the year, Evan said, “There is no added pressure. I have fought on the top level before as an amateur. All this really isn’t too much of a big deal. I am just here to do my job.”

He continued, “I know I am ready. My trainers have been switching things up a bit and making things more difficult to ensure I am ready. I would like to tell everyone who has helped me get here that I appreciate all the support and I love y’all.”

Kathy Duva, CEO of Main Events, said, “Heading into our 42nd year in business, it’s just wonderful to be able to debut Evan Holyfield on the biggest fight card of the year. His father, Evander, made his pro debut with Main Events on November 15, 1984 – almost exactly 35 years ago. I’m thrilled to have two generations from this family of incredible athletes under the Main Events’ banner.”

Evan has assembled a top-notch team fighting out of the Fighter Nation Boxing Gym in Houston, Texas. His trainer/manager is Maurice “Termite” Watkins (61-5-2, 42 KOs) and his strength and conditioning coach is Tim Hallmark, who has over 40 years of experience and is best-known for working with Evander Holyfield throughout his professional career.

“I know people called Evander ‘Real Deal’ but Evan is the real deal,” said Watkins. “There is pressure on him for this big card and because he has the Holyfield name, but that is part of the game. To be a great world champion you must be able to handle the pressure. You got to handle whatever circumstances are thrown at you.”

He explained, “Evan’s conditioning is incredible, but he is also amazingly talented with speed and power in both hands. We are training him to be skillful. We are going to look for him to hit and move.”

“We are prepared for a fight,” added Watkins. “We are ready to show our stuff and we are excited about being part of the Main Events team with Kathy Duva.”

Holyfield’s strength and conditioning coach, Tim Hallmark, said “We are constantly challenging Evan in different ways, and he is always up to those challenges. We are challenging him physically and mentally to keep him out of a rut. We are just trying to stay on the cutting edge and constantly looking at a better way to reach our end result.”
He continued, “We are excited about this opportunity. Evan has come a long way and he is a hard worker. He is mentally strong and very intelligent. He is a pleasure to work with. We will be ready for November 2nd.”

According to Main Events’ Matchmaker, Jolene Mizzone, “I am excited and honored to work with Evan and his entire team to get him to that championship level one day. I am going to fly the plane (make the fights) but he is the one who going to have to land it (win the fights). I have complete faith in him, his abilities and his team, Termite and Tim.”

Canelo vs. Kovalev is a 12-round fight for the WBO Light Heavyweight World Title presented by Golden Boy, Main Events and Krusher Promotions. The event is sponsored by Tecate, “THE OFFICIAL BEER OF BOXING,” Hennessy “Never Stop. Never Settle” and Brand-New Grapefruit Crush, Knockout Flavor. The event will take place Saturday, Nov. 2 at the MGM Grand Garden Arena in Las Vegas and will be streamed live exclusively on DAZN.