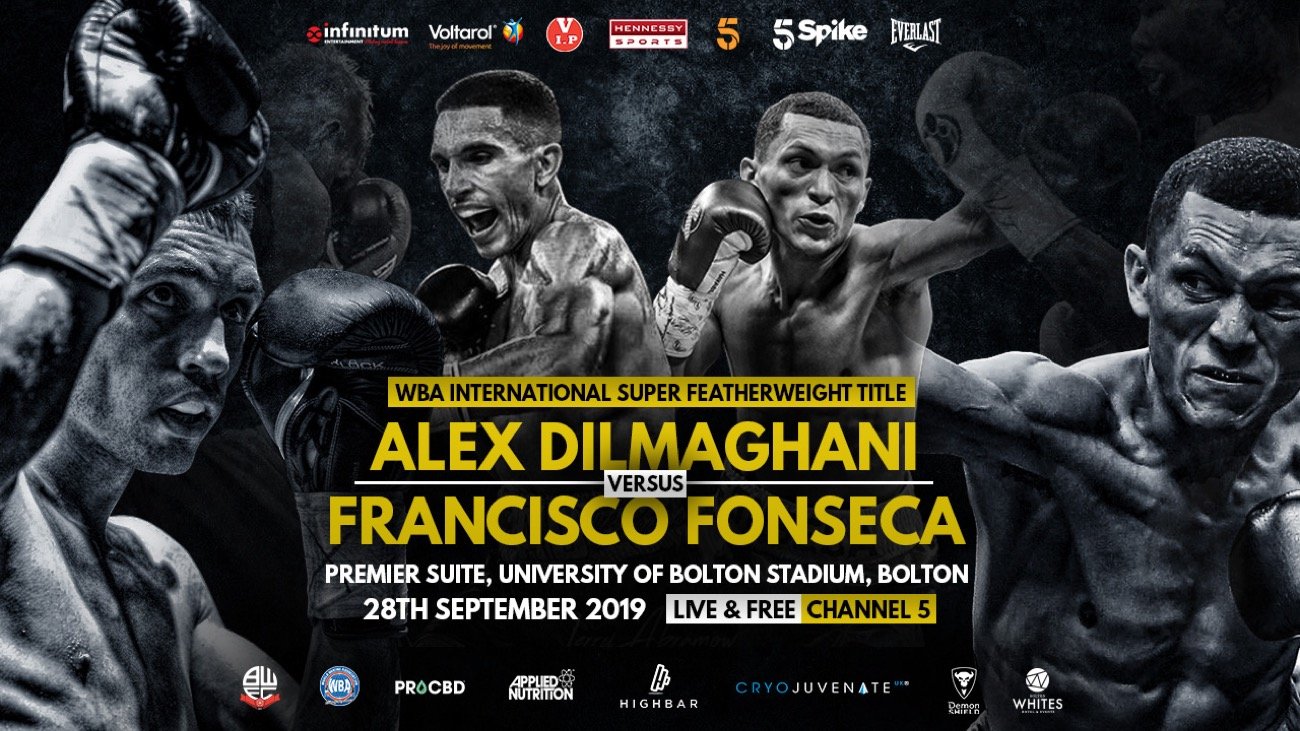 Septuagenarian fight face Ronnie Davies – Svengali to the Eubanks, Senior and Junior – has scaled the highest summits in the boxing business so his counsel merits full attention.

Davies, the ex-Southern Area lightweight king from Hove, who has served the Noble Art as fighter and coach for close to 60 years now, is adamant that fellow South Coast native Dilmaghani is destined to duplicate the two Chris’s by reigning at world level.

‘I’ve known Alex since he was 14 years old,’ says the venerable sage.

‘To fill in time between training the pros, I used to take a class of young kids at Cheetahs Gym in Hove. I remember Alex was incredibly dedicated. He walked miles just to catch the train from Worthing and I later learned he saved up all his pocket money to pay his gym subs. If I’d known, I’d never have taken them.

‘Straight away, I thought his dedication stood him out as special. And he always listened. Everybody in the game knows I’m ‘old school’. I teach the forgotten art of working off the ropes; bobbing, slipping, catching punches. Alex had that off to an art at a very young age. He had great instinctive defence and very fast hands. A natural.’

Simultaneous to studying for a law degree at the University of Southampton, dazzler Dilma launched into a career as a paid prizefighter back in 2009, aged just 17, and with literally just a fistful of amateur bouts on his CV.

‘I certainly didn’t persuade Alex to turn pro as a teenager,’ states Ronnie.

‘He just really wanted to do it. He believed he was good enough and he was. For his debut, they slung him in against Baz Carey, a 50 odd fight hard, hard journeymen who’d taken guys like Rendall Munroe, Michael Gomez, Amir Khan and Tyrone Nurse to points. At 17, Alex just played with him.

‘I’ve gotta say, I absolutely loved him. All the boys at our gym did. Alex was always very respectful but also very strong mentally. I had a quality squad back then and, as a teenager, he had hard spars with lads like Henry Castle, Chill John, Chris (Eubank) Jr. But I never worried cos they just couldn’t catch him. He more than held his own. If anything, Alex used to get on top of them.

‘He was a beautiful boxer who never took a punch and he had tremendous fitness and work rate. I’ve never seen anyone train harder at the gym, and that includes the Eubanks. Alex never lost with me but he had to leave because he wanted 24/7 attention and, at the time, because of other commitments, I couldn’t give it to him.’

Nevertheless, coach Davies continued to monitor the silky southpaw’s development when, post-graduation, he migrated to Mexico City and enrolled at the finishing school of legendary Hall of Fame trainer Ignacio ‘Nacho’ Beristain.

‘Getting off his arse and going to serve his apprenticeship in those rough, tough gyms in Mexico City, when he was only a boy, whatever Alex gets, he deserves,’ states Davies.

Operating on foreign climes between August 2014 and October 2018, the classy Crayford-based contender racked up five wins in Mexico and a further half dozen after relocating to Canada. Presently undefeated in well over eight years, Dilma positively sizzling in an emotional British homecoming at Manchester’s Victoria Warehouse last May, smashing 25-2-1 Slovak strongman Martin Parlagi inside schedule.

‘Alex was only a boy when he left me. Today, since returning from Mexico, he’s a lot, lot stronger,’ remarked Ronnie.

‘I was very impressed with him in that last fight. Alex boxed beautifully, didn’t put a foot wrong. The Slovakian boy was no mug but eventually he looked for the back door (Parlagi quit early in round eight, citing a damaged hand).’

This Friday, at the Bolton White’s Hotel, the lad Davies has known for half Dilma’s life, attempts to storm the world rankings when he gambles against Nicaragua’s ferocious Francisco Fonseca – a feted bomber who has twice contested the IBF world title and has splattered 19 of the 25 victims on his 28 fight CV ahead of schedule – for the Vacant WBA International 130lb Championship. Free-to-air Channel Five screen live on free-to-air TV and whoever prevails can expect to catapult into the world title frame.

‘This fight with Fonseca is ideal for Alex. The Nicaraguan’s proven world class and a genuine dangerman but Alex is 29 and he’s ready. He’s got to do it now,’ assesses Davies.

‘I know what he takes to steer fighters to world titles. Skill wise, Dilmaghani has what it takes and he’s also very clever. Alex can certainly be a world champion, if he’s handled right. It’s entirely up to him. If he wants it, he can do it.

‘And I think he will. His best quality is his dedication. He lives so clean. Too many of today’s fighters don’t but he’s a perfectionist. He has such great self-belief and mental strength, and that’s what I believe will push him through.’

Chief support on the talent stacked card sees undefeated starlets Jack ‘The Giant Killer’ Flatley and Harry ‘Hammer Time’ Scarff fight it out over 10 rounds for the former’s English Super-Welterweight Championship. Bolton wonder Flatley, a former national amateur finalist at both junior and senior level, is yet to be beaten in 16 but the ex-England international can expect to be stretched right to the limit by 7-0 Derby six footer Scarff in a mouthwatering match-up.

Promoter Hennessy’s son, Michael Hennessy Jr, an all action middleweight who is undefeated in two, is set to feature in a six rounder.

A full undercard featuring several of Steve Wood’s rising talents is set to garnish an unmissable night of entertainment.

Passions are sure to run high when Darwen’s robust Mickey Ellison (9-2) locks horns with Manchester technician Charlie Schofield (unbeaten in 16) in a seriously spicy looking Eliminator for the English Super-Middleweight Championship.