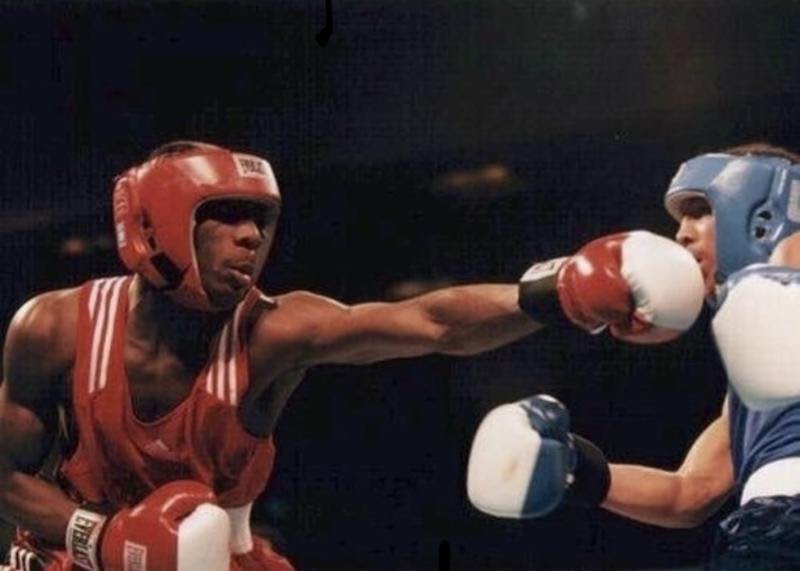 One of the best United States amateur boxers of all-time, he finished with a remarkable 104-14 record, including numerous medals and awards, culminating with him being named alternate for the 2000 Olympic Games in Australia.

“My first time going for a national championship,” Kelly remembered, “I won it, back in 1997. Leading up to that moment, I hadn’t fought or done anything in a few years, but I had this itch to be somebody. Deep down I knew that I belonged amongst the best in the world. Winning that series of tournaments, which landed me a #1 ranking in the county, let me know there was nothing that I couldn’t do, and I won several tournaments after that. Be it educational goals, personal insecurities, and professional mishaps, the fact that I could get in the ring to fight in front of hundreds and thousands of people was enough. How can I be discouraged or afraid to achieve greatness, when I’d already built the title of champion? Everything else didn’t come easy, but I knew that it was achievable, and well within my grasp.”

Born in Titusville, Florida, Kelly moved as a child with his father to the Bed-Stuy section of Brooklyn, and his father encouraged him to box. Eric trained at the New Bed-Stuy Boxing Venter and later at the famed Gleason’s Gym, winning his first national title at the age of 16.

In 2001, Kelly was the No. 1 ranked middleweight in the U.S., but he lost in the championship final of the USA Boxing Championships to an unranked Andre Ward, who went on to capture a gold medal at the 2004 Olympic Games in Athens, Greece.

“I wasn’t surprised that Andre won a gold medal and retired as an undefeated, two-division world champion as a professional,” Kelly said. “Andre’s focus has always been next level. He was a killer in the ring. When he beat me for the national championship, that’s when I knew that he was going to be a real star, because leading to facing me in the finals, he beat two guys that I’d previously beaten, and they were tough cookies.”

Kelly’s life dramatically changed while training at the United States Olympic Education Center (USOEC), where Kelly was trained by Al Mitchell, on the campus of Northern Michigan University in Marquette, Michigan. During a brawl in a barroom, he suffered nerve damage to his left eyelid, after being struck in the face with a pool cue.

“It taught me how to be a man,” Kelly spoke about his live-changing incident. “Honestly, I wish that I was as good to the program as the program was to me. During my time as a USOEC Bad Boy, I was able to win a couple of national championships and experience success inside of the ring, but outside of the ring I was battling life. I was going through a lot of personal issues with family, etc., which ultimately effected my career, as I was having huge disciplinary issues. I was constantly in trouble at USOEC, which twice got me removed from the program as a student-athlete. I was dishonest, violent and a terror. I was broken! Selfishly, I wanted others to feel my pain. There’s an old saying that misery loves company; I was miserable and lost everything – my scholarship, ranking as a boxer and my place on Team USA. I wasn’t allowed to fight in the USA Nationals. I was broken and wandering baseless. I still miss being the champ. I know that my potential was never fulfilled, not even half. Everything I’m doing now is solely for my five children because I need and will take great care of them! This is far deeper than my boxing career. It is their lives at stake, and this is one championship that I will win.”

Never having the opportunity to follow his dream to become world champion may have affected his life, but it has not broken him and has led him to post-boxing success as a father, entertainer, and entrepreneur.

“I look at fighters on TV who are experiencing great success, some I beat, some beat me, but I was always competitive,” Kelly remarked. “It’s tough to watch others live your deal, when you know you were right there. Guys like Andre Ward, Jeff Lacy and Jermain Taylor are guys I’ve punched in the face, and they punched me. The thing is, they took it to the next level and lived my dream, and I was forced to live from afar. Watching those guys also motivated me to achieve professional success as a businessman and entrepreneur. I showed that I can handle the tabloids in more ways than one. Damn near 20 years later, I’m still doing it, and you ain’t seen nothing yet!”

Today, the 38-year-old Kelly is a successful celebrity/athlete trainer, sports correspondent, viral video sensation, and brand ambassador. He’s also giving back as a coach for kids at his gym, SouthBox Gym, in the Bronx section of New York City.

“It’s deeper than coaching,” Kelly explained. “I am grateful to be in position to be able to give back like I do. I am blessed to own a gym where I can provide resources to those who need it and offer a facility where they can go to achieve their goals. I do a lot of work with youth from the Explorers program through the 40th precinct in the Bronx. I also own a pizza shot, Nobody’s Pizza, just two blocks from my gym. After workouts, I order pizzas for the kids and everything is free of charge. I call the program, PIzzaBox. I also speak to students at several high schools and universities across the United States.”

Instead of brooding about others living his dreams in pro boxing, Eric Kelly has moved forward into an incredibly career as an entrepreneur and, more significant, an invaluable father and role model who has been there and done that in just about every respect.