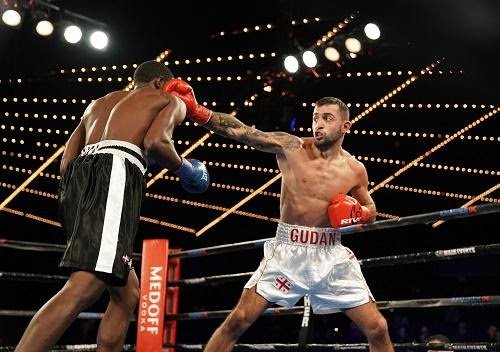 Among all the fighters on the stacked “Super Men” card at the Hard Rock Hotel and Casino in Atlantic City on August 4, none of them are as anxious to get into the ring and get into the action than undefeated welterweight prospect Enriko “Gogo” Gogokhia of Georgia (7-0. 3 KOs). Gogokhia looks to get back in the groove against Ronald Montes of Colombia (18-9. 16 KOs) after nine months out of the ring due to injury.

By interesting, what Gogokhia really means first and foremost is a fight that entertains the fans. “The most important thing is that fans are going to love me,” said Gogokhia.

Gogokhia doesn’t lack for self-assurance. He’s already been tested in the ring during an extensive career as a professional kickboxer before he turned to boxing. “I’m getting closer to mastering the system of boxing, and I really like boxing more. You’re going to see more and more interesting fights (from me),” said Gogokhia.

Gogokhia says the biggest challenge making the switch has ben adjusting to the rounds. Kickboxers only fight three to five three minute rounds, while he’s already fighting six rounds as a prospect. But as for the technique, “For me it was zero problems, because I’m the best. The boxers now have more experience, but I’m getting used to it step by step.”

Gogokhia exudes a contagious confidence whether speaking in his quickly improving English or any other language. Where does his confidence come from? “Everybody is scared of something in the world. I am that person who knows how to cope with problems. I guarantee opponents are going to be scared of me, and worried about me – not me of them,” declared Gogokhia.

Gogokhia took time to thank his team including his trainer Marco Contreras, manager Egis Klimas, and promoter Kathy Duva. “I have the best team in the world. I want to achieve me goals for all the people around me. Boxing is a team sport even though you are alone in the ring,” said Gogokhia.

About Kovalev-Alvarez: In the first boxing event at the newly opened Hard Rock Hotel & Casino in Atlantic City, NJ, Sergey “Krusher” Kovalev will defend his WBO Light Heavyweight World Title against undefeated contender Eleider “Storm” Alvarez on Saturday, August 4, 2018. In the co-main event, WBA Light Heavyweight World Champion Dmitry Bivol will defend his title against Isaac “Golden Boy’ Chilemba. Tickets range between $50 and $200 and are on sale now through HardRockHotelAtlanticCity.com and Ticketmaster.com. The event is promoted by Main Events and Krusher Promotions in association with Groupe Yvon Michel and World of Boxing and will be televised live on HBO World Championship Boxing beginning at 10:00 p.m. ET/PT.