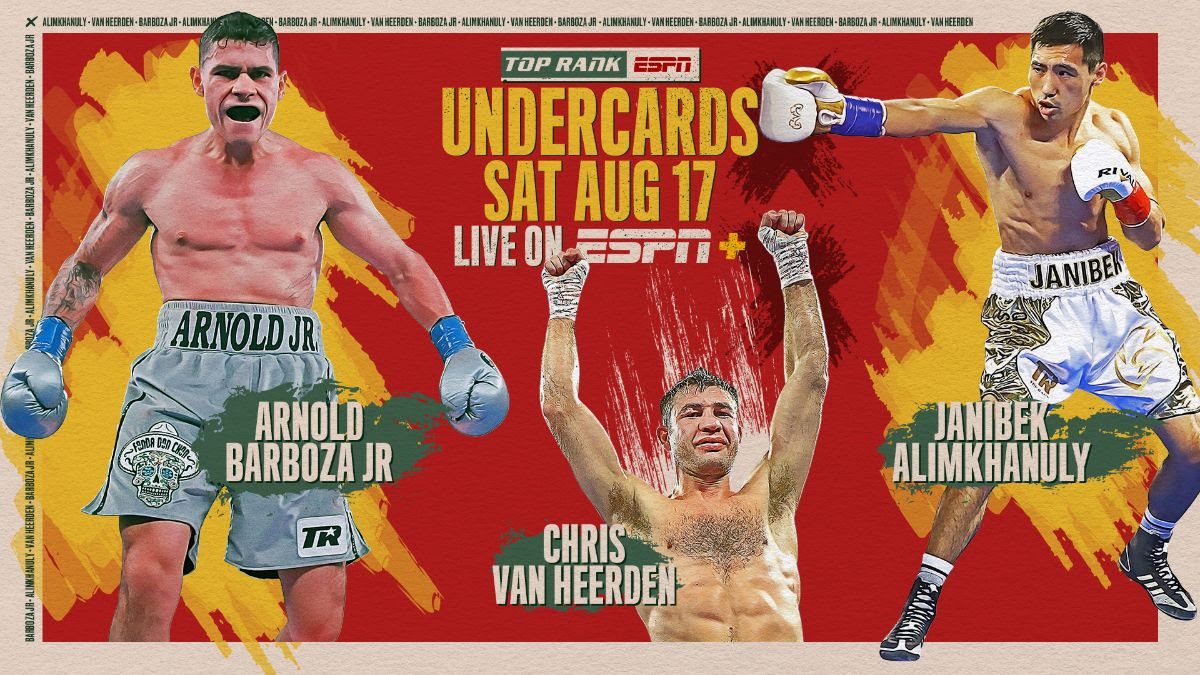 The trio will be part of a stacked undercard that will air live on ESPN+, the leading multi-sport streaming service, beginning at 6:30 p.m. ET/3:30 p.m. PT.

Barboza (21-0, 8 KOs), fresh off a knockout win over Mike Alvarado in April, will take on Jose Luis Rodriguez (25-13-1, 13 KOs). A native of nearby South El Monte, California, Barboza is ranked No. 4 by the WBO at 140 pounds. Rodriguez is 0-1-1 in 2019, including a competitive decision loss to former world title challenger Antonio Orozco and a draw with then-unbeaten prospect Bakhtiyar Eyubov.

“That Alvarado fight boosted my confidence to a whole new level,” Barboza said. “I’ve always been confident, but I needed to know I could do it at that level. The hard work paid off. We’ve trained hard for this fight. I’m at another level now, and we’re ready to showcase that on the 17th.

“Everyone looks at the rankings, but it’s the next man up on the contract for me. Of course I want a title shot, but the longer these champions wait, the harder it will be for them because I am building my confidence in the ring.”

Alimkhanuly (6-0, 2 KOs), who captured a gold medal at the 2013 AIBA World Boxing Championships and advanced to the quarterfinals of the 2016 Rio Olympics, will face Stuart McLellan (27-3-3, 11 KOs). Trained by Buddy McGirt, Alimkhanuly most recent fought on the Vasiliy Lomachenko-Anthony Crolla card April 12 in Los Angeles, dominating Cristian Olivas over 10 rounds.

“Every time I fight, I try to show what ‘Qazaq Style’ is all about,” Alimkhanuly said. “With every fight, I gain more valuable experience, and I will be ready to challenge for a world title before long. I have an incredible trainer in my corner and the confidence needed to advance to the next level. This is a very big stage, and I will show everyone that I’m a middleweight to watch.”

van Heerden (27-2-1, 12 KOs) will face Aslanbek Kozaev (33-2-1, 8 KOs), who has won seven in a row dating back to November 2015. On March 23, van Heerden impressed in his Top Rank debut, notching a six-round technical decision over Mahonri Montes in a bout that ended due to a cut suffered by van Heerden.

“It’s a homecoming for me on Aug. 17,” van Heerden said. “The LA fans will adopt this South African boy. I am grateful to Top Rank for the opportunity to compete and stay busy on my road toward a world title.”

Promoted by Top Rank, in association with Zanfer Promotions and Iron Boy Promotions, tickets priced at $100, $80, $70, $60, $45 and $25 (not including applicable fees) are on sale now and can be purchased at Ticketmaster.com, charge by phone at 800-745-3000 and in person at the Banc of California Stadium box office.

In other action on the undercard:

READ:
Deontay Wilder, Tyson Fury Arrive at MGM Grand in Las Vegas
Read: Floyd Mayweather Is Back Hitting It In The Gym: Is He Training For Pac Rematch? Do You Care?
Read: Inoue vs. Donaire meet in WBSS final on Nov.7 in Japan
Follow @boxingnews24