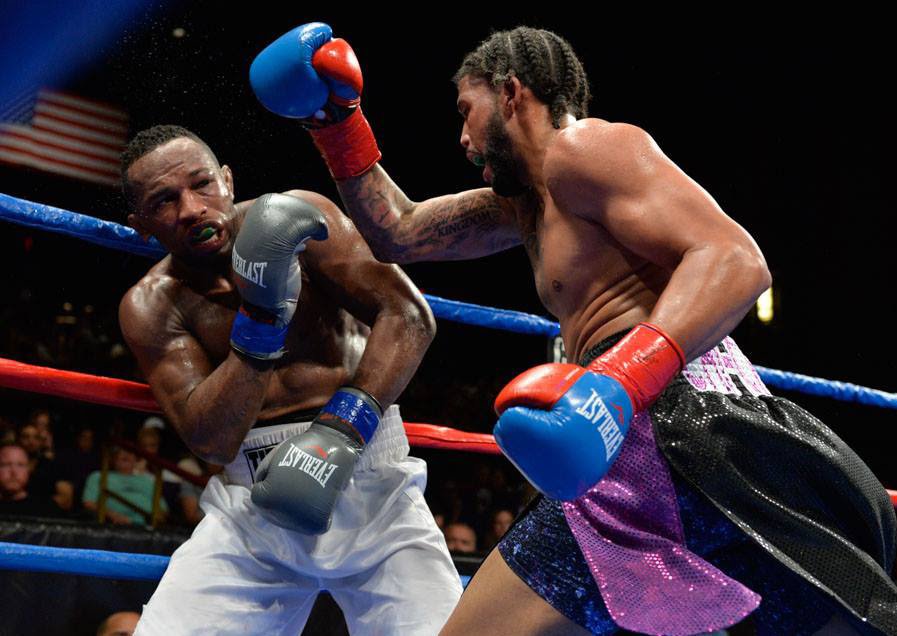 The 27-year-old Johnson (6-0, 4 KOs) has been on an incredible role since making his professional in February of 2017. The combined record of his last three opponents at the time of the opening bell was 10-2, including a win over 6-2 Eric Govan in November followed by an impressive fourth-round knockout win over unbeaten Jeremy Lane in May. Oct. 20th is his first fight in the northeast.

The fan-favorite Figueroa is no stranger to the Foxwoods audience. He made his Fox Theatre on June 2nd, outworking the game Leandro Silva in an unanimous decision win. He compiled an impressive amateur record before turning pro, including a showdown with former United States Light Heavyweight Champion Jonathan Esquivel at the 2016 U.S. Olympic Trials in Reno.

Williams returns to Foxwoods for the sixth time in his career and headlines for the first time since August of 2017. Following his first career loss in Nevada in April, Williams rebounded with a win over Colorado’s Christian Aguirre in June, dominating the fight from start to finish en route to a 60-53 unanimous decision win on all three scorecards.

On Oct. 20th, he faces a tall task against the slick, elusive Halili, who returns to the ring for the first time in 11 months. Halili scored his biggest win in June of 2017 when he outclassed previously unbeaten welterweight Wesley Tucker over the course of eight rounds to score the unanimous decision victory, and recently competed for the WBC FECARBOX title against Raymond Serrano in November.

Soto continues his resurgence Oct. 20th in a long-awaited showdown against Lenk, who makes his New England fresh off a tryout with the recently-relaunched The Contender reality television series.

Soto also fought on the June 2nd event in the main event against New York’s Salim Larbi, which ended with Soto earning a split decision win, 75-74, 76-74, 74-76, after picking himself up from the canvas in the opening round and scoring a knockdown of his own in the sixth to turn the fight in his favor.

Since returning to the ring in October of 2017 following a two-year layoff, Soto has won his last three fights, including a knockout win over regional rival Ray Oliveira Jr. in February.

Lenk boasts a loaded resume featuring bouts against the region’s top 154-pounders, among them Mark DeLuca, Steven Martinez, Hector Vazquez and Ricardo Williams Jr., who have a combined record of 84-9. Promoted by Evander Holyfield’s Real Deal Boxing, the 30-year-old Lenk was born in California and fought primarily out west at the beginning of his career, earning wins over contenders Boyd Henry, Fernando Rodriguez and Alberto Herrera during an impressive, three-fight win streak between 2011 and 2012.

The Oct. 20th card features several hotly-contested regional rivalries, starting with what could be the showstopper in the welterweight division between unbeaten Derrick Whitley Jr. (4-0) of Springfield, Mass., and rising prospect Sharad Collier (1-0) of Hartford, Conn., who won his professional debut in June. The two put their unbeaten records on the line in a special six-round showcase as Whitley aims for his fifth win in 18 months while Collier steps up to face the 27-year-old right-hander in just his second pro fight.

Also in the welterweight division, Marqus Bates (4-2, 3 KOs) of Taunton, Mass., makes his Foxwoods debut in six-round bout against Carlos Hernandez (3-2-1, 2 KOs) of Bridgeport, Conn. Bates recently pieced together his most complete performance to date, punishing Springfield’s Mohammad Allam en route to a third-round knockout in May, and has now won back-to-back bouts. Hernandez steps into the ring for the first time in six years, but has won three of his last four, with the lone blemish a draw against veteran Josh Beeman in 2012.

Fan-favorite Marcia Agripino (2-1-1) of nearby Ledyard is back for the second time since June and will fight her first six-round fight against the dangerous Stephanie Essensa (3-1-1) of Alberta, Canada. Agripino earned her first win since 2013 back in June when she defeated Kay Hansen of California via majority decision in a back-and-forth slugfest. Essensa, who also boasts a 2-1 record in mixed martial arts, has won two of her last three in boxing, including a big win over Mexican challenger Jacqueline Coutino earlier this month.

Fighting in a separate four-round bout, decorated Bridgeport standout Jacob Marrero makes his professional debut following an amateur career in which he finished 58-7.