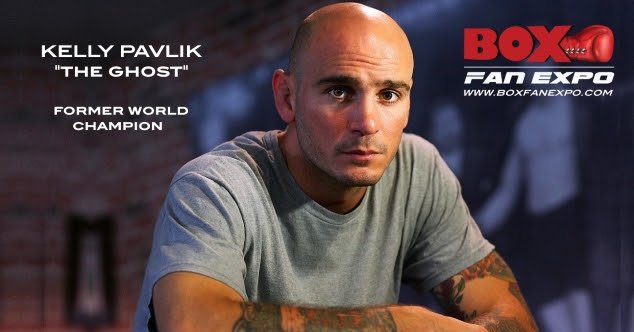 Former Middleweight Champion Kelly Pavlik has confirmed that he and “The Punch Line” Podcast team will appear at the “Ring Life” booth to Meet & Greet his fans at the Las Vegas Convention Center for the fourth edition of Box Fan Expo that will take place Saturday May 5, 2018 from 10a.m to 5pm, during Cinco De Mayo weekend. The Boxing Expo will also coincide with the mega fight between Saul “Canelo” Alvarez vs Gennady “GGG” Golovkin, that will take place later that evening.

Pavlik will appear for the first time at this years’ Expo. Kelly and “The Punch Line” team will have merchandise to sell to his fans, as well as photos and memorabilia. They will also promote their New Show from the Boxing Expo.

Kelly Pavlik Known as “The Ghost”, is an American former professional boxer who competed from 2000 to 2012. Pavlik grew up on the south side of Youngstown, Ohio. He won the unified WBC, WBO, Ring magazine and lineal middleweight titles by defeating Jermain Taylor in 2007, which was also named Fight of the Year by the Boxing Writers Association of America. Pavlik made three successful defenses before losing them to Sergio Martínez in 2010. On January 19, 2013 Kelly Pavlik announced his retirement from boxing.

Today Pavlik is the host of the Podcast Boxing show “The Punch Line” http://punchline.live/ with his co-host James Dominguez.

Joe Smith Jr. Bites Down And Earns The WBO Championship Of The World

Exhibitors such as boxing gear, apparel, new equipments, energy drinks, alcohol, supplement products, broadcasting media, sanctioning bodies and other companies who wish to participate will once again have a chance to showcase their brand to fans, media and the boxing industry.

Tickets to the Box Fan Expo are available online at:
http://www.boxfanexpo.eventbrite.com

Box Fan Expo is the ultimate boxing fan experience event, which allows fans to Meet and Greet Boxing Superstars of today, current and former world champions, Legends of the sport and other boxing Celebrities at their booth. On Site, fans will experience different activities from Autograph Sessions, Photo Sessions, FaceOff with your favorite boxers, as well as a chance to purchase merchandise and memorabilia from their booth, plus so much more… you won’t want to miss this must-attend Expo!

Throughout the next couple of months leading up to the Event, there will be weekly updates on the many stars that will commit their appearance at the Boxing Expo. And for anyone in the Boxing industry or other Exhibitors (non-industry), who would like to be involved and reserve a Booth, contact Box Fan Expo:

Sebastián Fundora: I want to be the next generation of great Mexican-American fighters
Follow @eastsideboxing