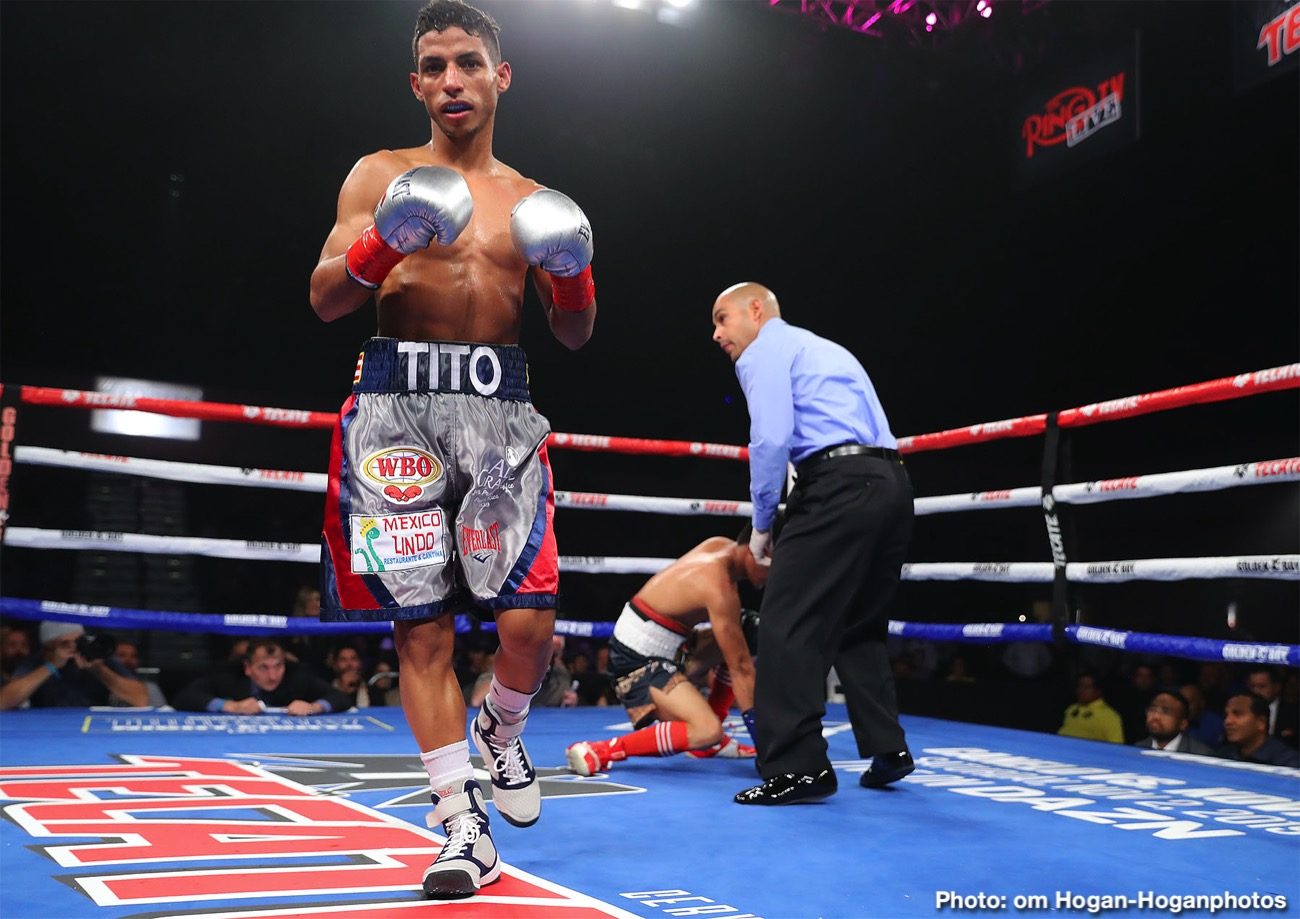 Elwin “La Pulga” Soto (16-1, 11 KOs) of Mexicali, Mexico made the first successful defense of his WBO Light Flyweight World Title against Filipino contender Edward “The Heneral Fighting” Heno (14-1-5, 5 KOs) via 12-round unanimous decision in the main event of the Oct. 24 edition Thursday Night Fights at Fantasy Springs Casino in Indio, Calif. Soto won with scores of 114-113, 115-112 and 115-112. The event was streamed live on DAZN, RingTV.com and on Facebook Watch via the Golden Boy Fight Night Page. The series is also available on regional sports networks around the nation.

“I felt I need to throw more punches,” said Elwin Soto. “I won the early rounds, and I won the later rounds. But there were some rounds in the middle where he beat me. Either way, I won the fight, and I’m ready for anyone. I just want to keep fighting, no matter who it is.”

In the co-main event, Angel “Tito” Acosta (21-2, 21 KOs) of San Juan, Puerto Rico made his debut at 112 pounds via fifth-round knockout against Raymond Tabugon (22-11-1, 11 KOs) of General Santos, Philippines for the vacant WBO International Flyweight Title. The fight was stopped at 1:02 of the aforementioned fifth round of a scheduled 10-round bout.

“I felt strong in my first fight at 112 pounds,” said Angel Acosta. “I now want to fight against the best fighters in this new weight class. With this title, I’m now ranked in the top five, so I want any of the top fighters.”

“He was a tough fighter, but the game plan worked,” said Raul Curiel. “We got in there, worked the body and got him out. We had a great training camp with lots of good sparring, so that’s why we looked the way we did tonight.”

Jonathan “Thunder” Navarro (17-0, 9 KOs) of East Los Angeles, California scored a second-round technical knockout win against Lebin Morales (17-6-1, 8 KOs) of Juigalpa, Nicaragua in an eight-round super lightweight bout. The fight ended when Morales’ corner threw in the towel at 1:49 of the aforementioned round.

“I felt great in there,” said Jonathan Navarro. “For this camp, we took it back with my father. He likes to train in a more amateur style. So we incorporated more movement. That’s why we were countering a lot.”

“It was a Great fight,” said Aaron McKenna,”My opponent was rough durable opponent. It’s great to have another six rounds in the books. I learned a lot given that he was so durable.”

“I noticed he was hurt,” said Nick Sullivan.”But my team always tells me to be patient. So, I stayed patient, went in there and got him out.”

Soto vs. Heno was a 12-round fight for the WBO Light Flyweight World Title presented by Golden Boy in association with Zanfer Promotions. The event was sponsored by Tecate “THE OFFICIAL BEER OF BOXING”. The fight took place Thursday, October 24, 2019 at Fantasy Springs Resort Casino in Indio, Calif. The event was streamed live on DAZN, RingTV.com and on Facebook Watch via the Golden Boy Fight Night Page. The series is also be available on regional sports networks around the nation. 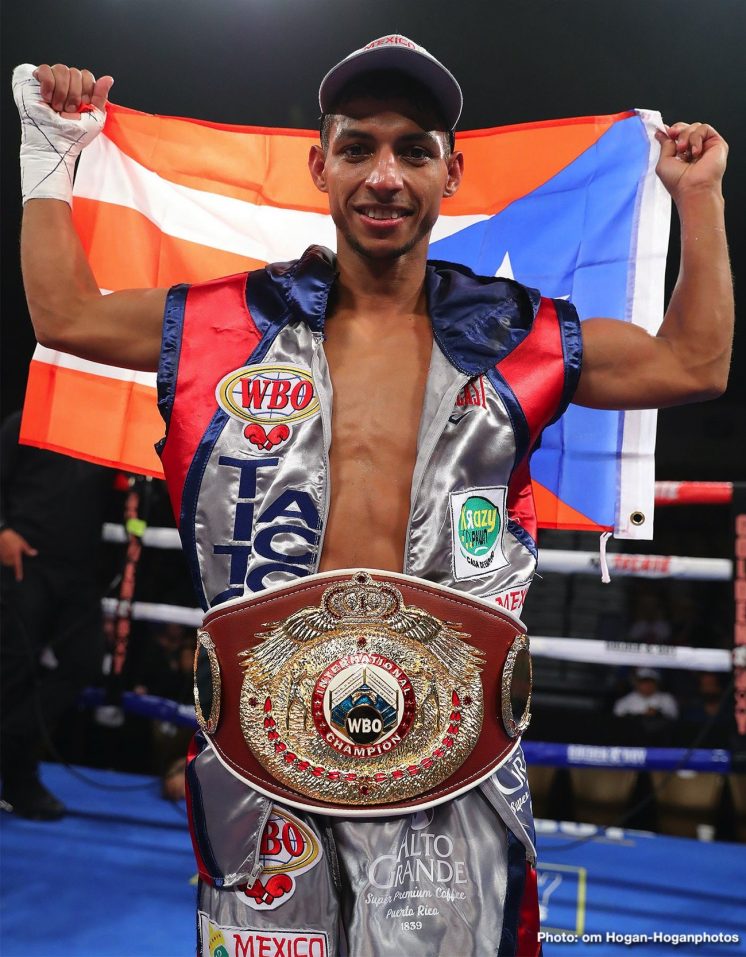 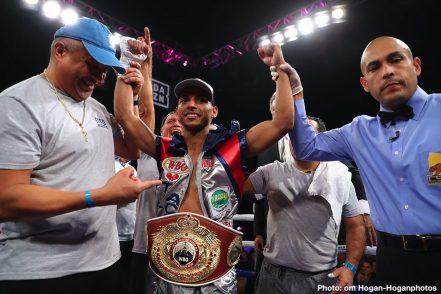 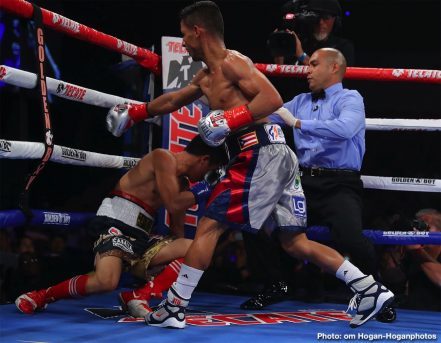 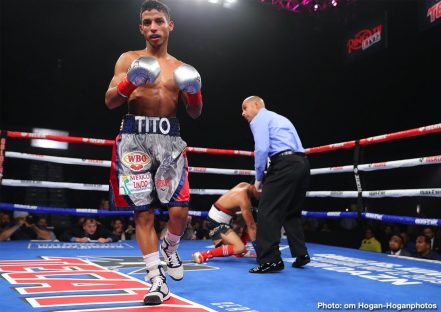 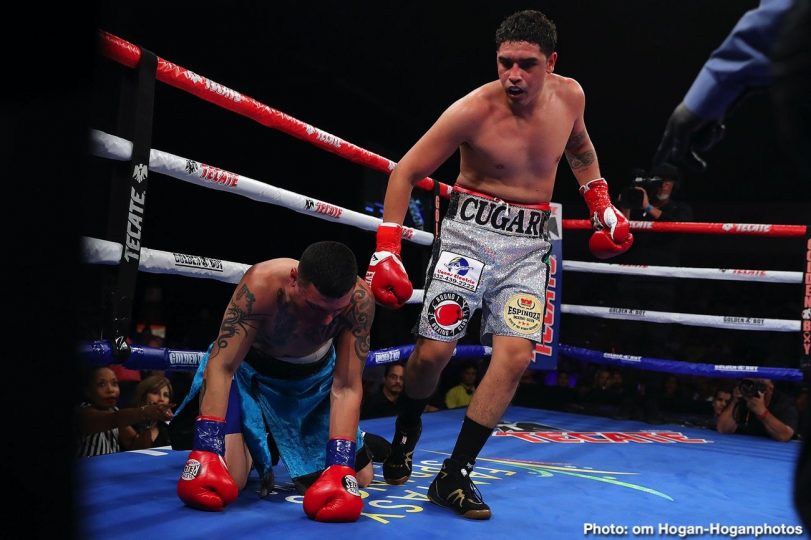 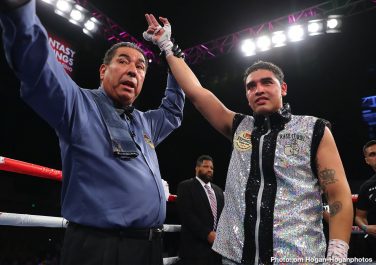 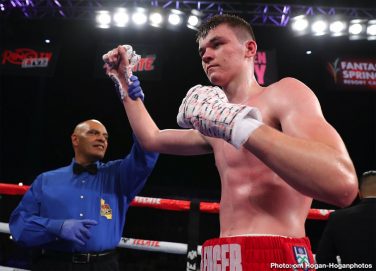 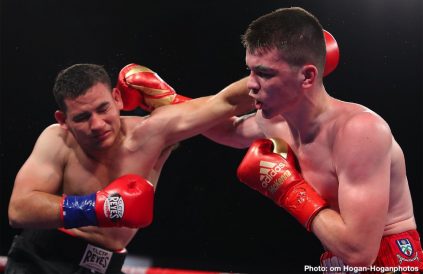 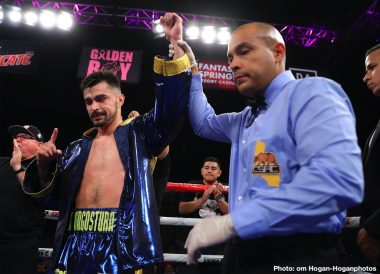 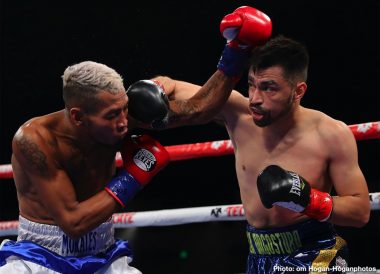 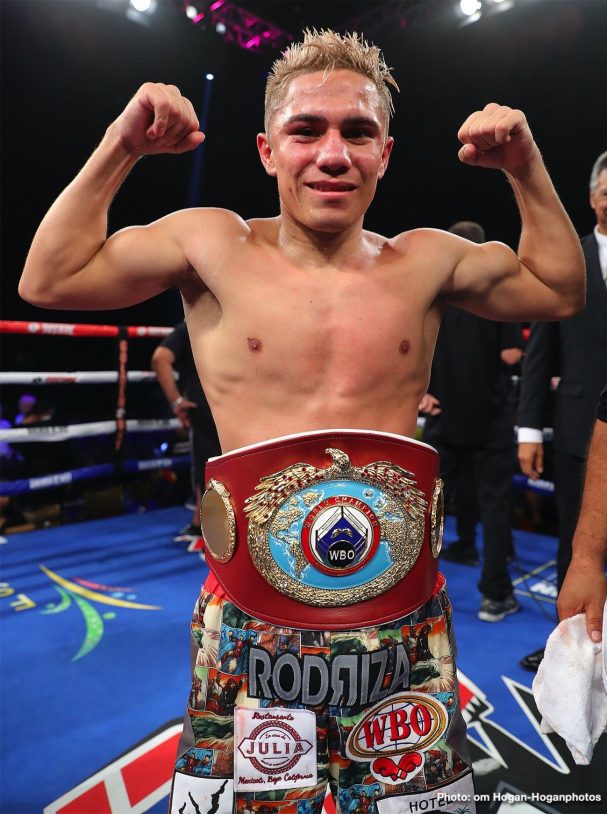 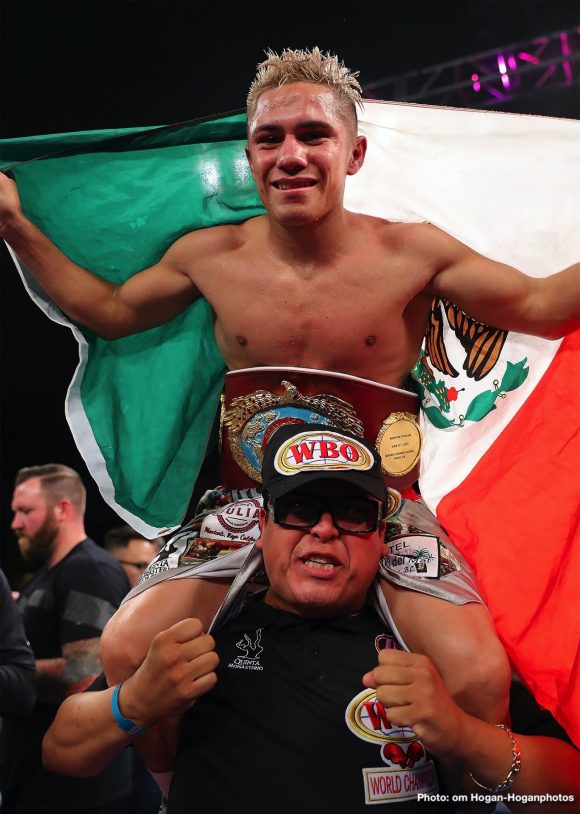 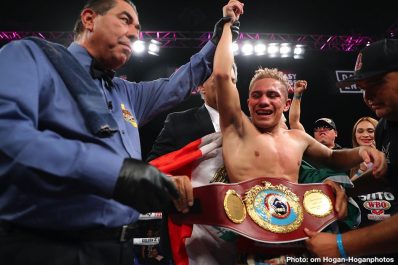 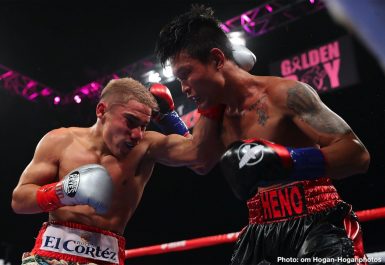 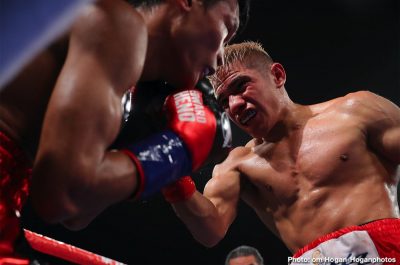 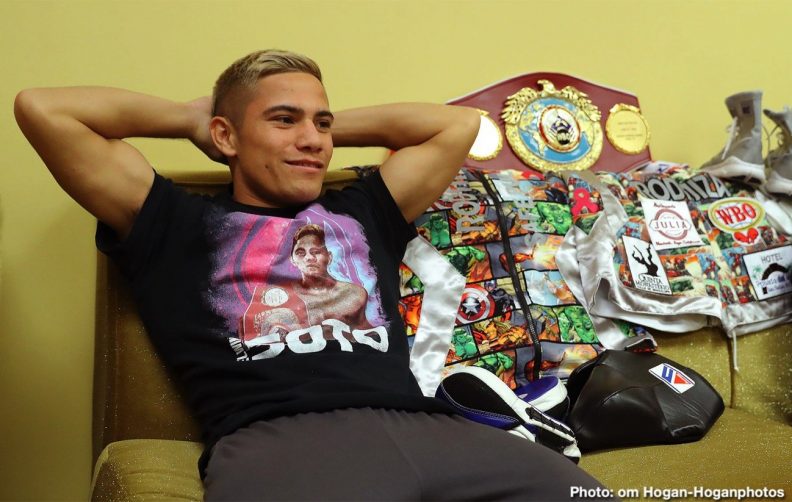 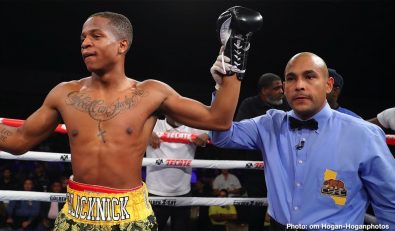 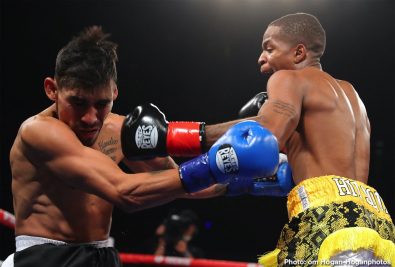 Golden Boy, the leading media and entertainment brand, is proud to announce that its Thursday Night Fights series will now be streamed on DAZN. The series is set to continue today as Mexican warrior Elwin “La Pulga” Soto (15-1, 11 KOs) makes the first defense of his WBO Light Flyweight World Title against Filipino contender Edward “The Heneral Fighting” Heno (14-0-5, 5 KOs) in a 12-round main event at Fantasy Springs Resort Casino in Indio, Calif.

The series will also be streamed live on RingTV.com and on Facebook Watch via the Golden Boy Fight Night Page. It will also be available on regional sports networks around the nation. The action will take place across all platforms beginning at 10:00 p.m. ET/7:00 p.m. PT.

Earlier this year, Golden Boy and DAZN launched this monthly boxing series as a way to feature top prospects and rising contenders as they develop into main event attractions such as Canelo Alvarez and Jaime Munguia. The series has also served to increase awareness of the DAZN brand, providing another terrestrial platform from which fans can enjoy the fruits of the exciting partnership between the two companies. With Thursday Night Fights now available on DAZN, fans will be able to enjoy twice as much Golden Boy action across even more platforms. The series is an exciting addition to fight season on DAZN – an entire fall featuring the biggest matchups in one of the best schedules in boxing history.

“Through our DAZN partnership, we’ve been able to deliver fantastic live fights and bring the sport of boxing to an even bigger audience,” said Oscar De La Hoya, Chairman and CEO of Golden Boy. “We’re excited to add even more fights to the platform and put our top prospects and contenders in the spotlight. We’re continuously looking to provide fans with more boxing action in as many platforms possible, and having our Thursday Night Fightsseries streamed on DAZN does just that.”

Ricardo Sandoval (16-1, 11 KOs) of Rialto, Calif. will defend his WBC Youth Intercontinental Flyweight Title against Alonso Melendez (15-3, 13 KOs) of Chihuahua, Mexico in a 10-round fight.

Nick Sullivan (1-0) of Norfolk, Virginia will return in a four-round lightweight bout against Gilberto Aguilar of Mexico City, Mexico.