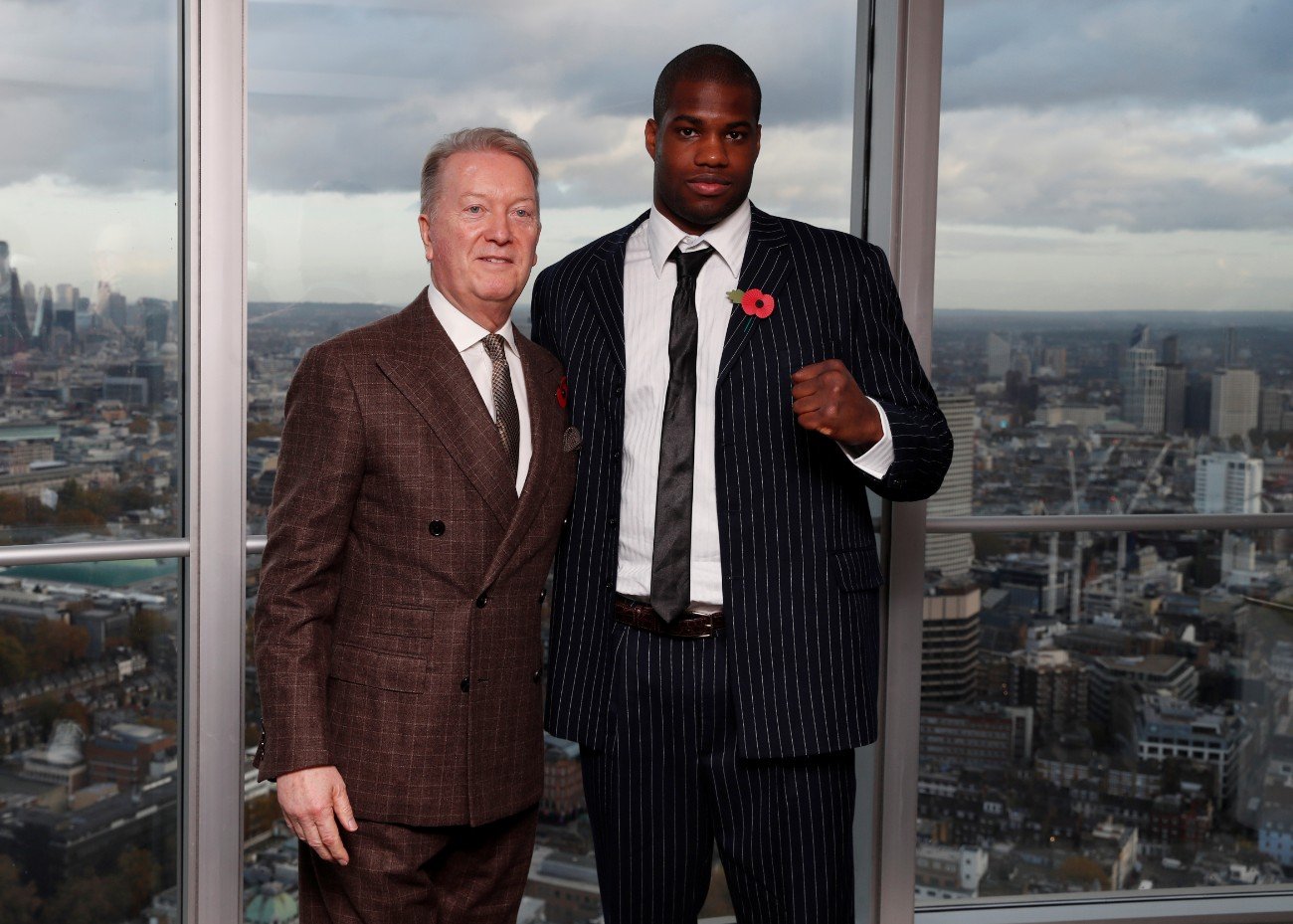 One day after Christmas opponent Kyotaro Fujimoto compared Daniel Dubois to a bear, and unveiled a man in a panda suit as his sparring partner, ‘Dynamite’ has warned that “Fujimoto needs to be careful”.

Referencing his foes taunts, Daniel continued “He might be expecting a panda, but what he’ll get is a grizzly.”

“He says he wants to change his life and make a name for himself. That’s not a problem. On December 21st, I’ll make him famous.”

Dubois, 13-0 with 12 KO’s, has the credentials to do just that and is coming off a stunning first round stoppage over previously undefeated Ghanaian Ebenezer Tetteh.

Danel admitted that he didn’t “fully understand” the reasons behind Fujimoto’s bizarre press conference performance, but later added “it won’t matter once I knock him out.”

The heavyweight battle between Dubois and Fujimoto won’t just be for festive bragging rights, but for the WBO International Heavyweight title as well as the WBC Silver Title, previously held by Dillian Whyte.

Despite planning an assault on a world title in the near future, Daniel is eager to let his Japanese opponent know that he is taking this next fight seriously.

He said: “‘I hope he doesn’t think we’re taking this fight lightly, or that we think it’s an easy win. He’s the #12 ranked heavyweight with the WBA and is clearly a very good fighter.”

“Preparation is key with all these things. We are bringing world class sparring in from America, people i’ve never sparred before.”

But with experts predicting the break-up of the Heavyweight belts in 2020, it is hard for talk not to return to World Championships.

When pushed on his intentions Dubois insisted: “I’m laser focused, i’m ready for Fujimoto” but did admit that he intended to “use this fight as a stepping stone to rise up the rankings, and set my sights on a world title”

Away from bear chat, Kyotaro was also keen to let the world know that he was willing to channel the spirit of fictional fighter Rocky Balboa to get the win against his heavy-hitting and much younger opponent.

When asked about that quote particularly, Daniel responded: “He thinks he’s going to be Rocky Balboa? if he starts getting hit with the type of shots Rocky got hit with in the films then it’s going to be a short night.”

With tensions continuing to rise between the two fighters, the Copper Box Arena is sure to be nothing less than a bear pit for ‘The Fight Before Christmas’ on December 21st.

SUNNY EDWARDS GETS his shot at the British super flyweight title when he takes on English champion Marcel Braithwaite for the vacant belt at the Copper Box Arena on December 21.

The 23-year-old has craved another domestic showdown since he put a big marker down in the division with a comprehensive schooling of the experienced former European champion Ryan Farrag in October 2018 and now it is another fighter from Liverpool looking to put a dent in his perfect record.

Braithwaite, 25, won his English belt by beating Craig Derbyshire for the second time in October and holds a record of 9-1 as a professional.

“I couldn’t be more happy, to be honest,” said Edwards on the British title match being made. “I had sort of given up on the prospect of fighting for the British title any time soon, which is why I made the move down to flyweight with a view towards world titles sooner rather than later.

“Then a few months ago Marcel called me out and then won the English title so it has all worked out that I finish the year with a British title shot. I have really been in the No.1 position for the last year at least.

“I wanted a fun fight, there is a bit of needle there and I think I am going to show complete levels. There will be very few people backing against me for this one but, at the same time, he is lively, he wants to have a go and this is his chance at the big time.

“He is going from boxing on small hall shows on small YouTube channels to boxing on BT Sport and he has got me to thank for that,” added Edwards, who went on to explain the backstory behind the spikey social media exchanges between the pair.

“He got offered the fight in June for July, I think it was. They turned it down and then a couple of weeks later he puts on Twitter that I am saying nobody will fight me and he will fight me before the end of the year.

“I went ‘fair enough’ and had my fights before he beat Craig Derbyshire – on a split decision – and now what he said is coming to fruition.

“Me and him actually used to be friends and shared rooms together on Team England and would support each other. Then, one day, he unfollowed me on Instagram because apparently I don’t like enough of his pictures.

“He has called me a bitch and I think he just got a bit excited with his little leather belt. On December 21 it will be a reality check for him and I just hope that no ghost injuries come out of nowhere and there is no U-turn.

“For me, he is just a bang average fighter who is getting the opportunity just because he is British and nobody else wants it.”

For his part, Braithwaite sought to play down the discord and heaped praise on the accomplishments of his former amateur teammate.

“I’ve just won the English title so it is great to be straight in and it would be some story to beat him,” said the former bantamweight. “I am fighting against a world-ranked boxer, who has boxed internationally as an amateur and is expected to be the next big thing.

“It is a massive fight and one people want to see as well,” he continued, before explaining why he labelled Edwards a ‘bitch’ in a recent interview.

“What it was, a few months ago he claimed nobody would fight him for the British and I said in the most respectful way that I would. With that he just started talking bad about me and I didn’t understand why.

“If he genuinely wanted an opponent and someone said they would fight him, I thought he would be grateful. It wasn’t the case, so that is what it was about.

“I have never actually had a problem with him. I’ve heard what he’s said about Instagram and that is sly because nothing like that bothers me and I wouldn’t be that petty.

“I’ve always wished him well and been quite the fan of him. He is good to watch.

“I am a massive underdog and I’m not expected to win. Imagine if I did win! A Golden Ticket it would be.

“I want to keep things respectful, but whether he wants to is another thing. I am just looking forward to it, I have got a massive opportunity in front of me and I can only be grateful for it.

“Fighting at the Copper Box live on BT is what dreams are about. It is what you imagine as a kid when you think about being a professional boxer. Live on BT alongside big names like Daniel Dubois – it is massive and I am going to enjoy every second of it.”

Frank Warren’s Queensberry Promotions are heading to the Copper Box Arena to stage a bumper night of boxing on December 21st, which features the British super flyweight title showdown between Sunny Edwards and Marcel Braithwaite.
Unbeaten Heavyweight sensation Daniel Dubois (13-0) looks to continue his path of destruction against Japan’s Kyotaro Fujimoto (21-1). The WBC Silver Heavyweight championship and the WBO International Heavyweight belts will be on the line.

Light Heavyweight prospect and Love Island star Tommy Fury (2-0) makes his long awaited return to the boxing ring after winning the hearts of the nation on the popular ITV reality television show over the summer.