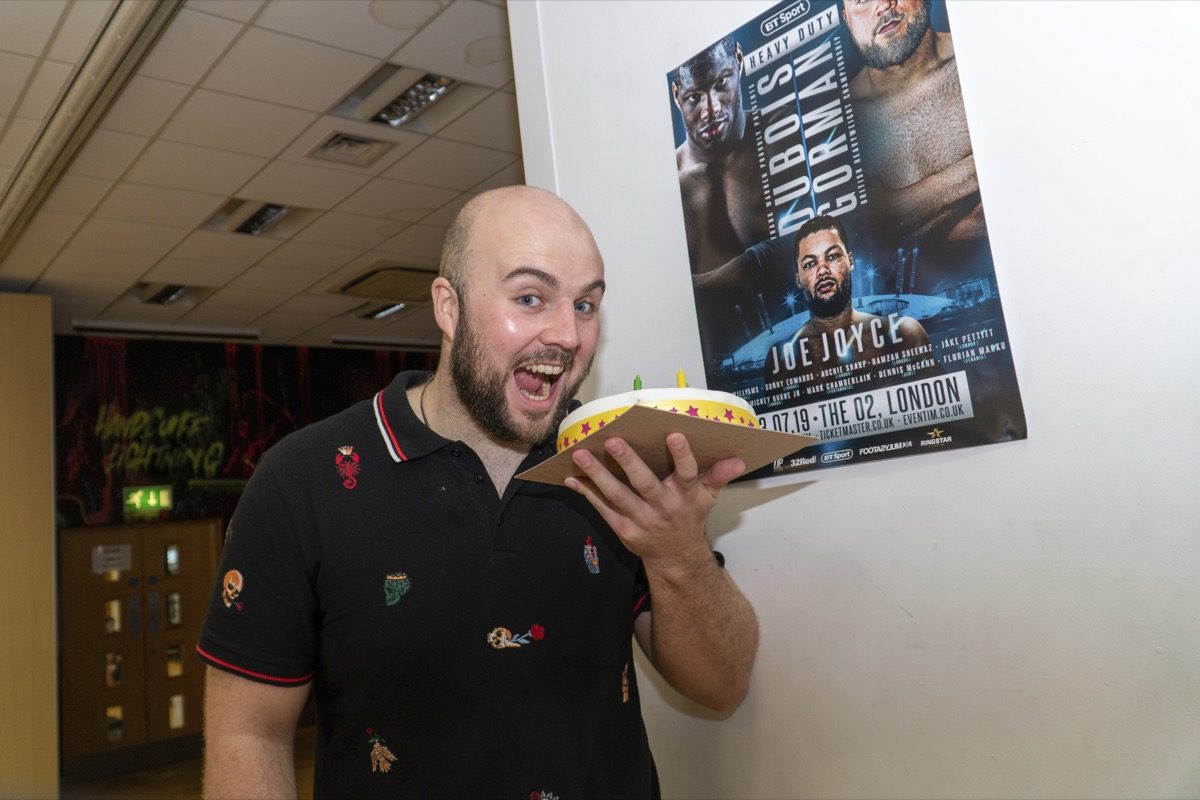 Gorman, is 23 today (Tuesday), but in no mood to celebrate until after their vacant British heavyweight title clash at London’s o2 on Saturday July 13, live on BT Sport.

He said: “It’s just a normal training day so I am hardly in the mood to eat cake and have a fun day.

“I won’t see my family because I am staying away from home to be near the gym, but it will be worth it when I beat Daniel.

“I was given the cake at the wrong time and if I did try to eat it I don’t think my trainer Ricky Hatton would’ve been pleased.”

Dubois (11-0, 10 KOs) has done his best to dampen Gorman’s birthday claiming his rival will never entertain fans and says he expects an easy night on Frank Warren’s spectacular card.

Gorman (16-0, 11 KOs) who sparred around 200 rounds with Dubois when they were amateurs snapped back: “Don’t throw stones from a glass house.

“He knows deeps down that he has to train his hardest and that I am coming to take that belt. He knows it.

“No disrespect to the opponents we have both fought – they are just learning fights and had lost before. I won’t accept defeat like they might.

“When I beat him what is he going to say then? He says I’m not exciting, but I will have beaten him so what will that make me?”

Gorman, by his own admission, has laboured somewhat to points victories in his last three fights, but mitigates this by pointing out that he has suffered with opponent withdrawals and short notice changes, therefore affecting his level of motivation.

Dubois views the matter differently and insists his July 13 British heavyweight title opposition will never deliver the thrills and spills.

“Well, this sort of fighter will never be entertaining, it is just the way he is,” reasoned the London fighter. “One thing I can tell you is he is never going to be exciting to watch.”

The same certainly cannot be said for Dubois, with his 10 KOs from 11 pro fights. The 21-year-old even entered into a couple of wild swing-offs with his last opponent, Richard Lartey, before stopping the Ghanaian in the fourth.

Dubois cannot fathom what the thought process was behind being drawn into a shootout.

“To be honest, I don’t know,” he admitted. “The spirit and energy told me to do that and I went out and did it. The only thing I can say about that fight is I got a win.”

Meanwhile, Dubois went on to borrow the words of Lartey when assessing the merits of Gorman as an opponent and whether he is the Nantwich man’s toughest assignment to date.

“Yes, as my last opponent said, he is baby food and this guy has definitely been on that.”

Gorman: Dubois Not The Force People Think He Is

NATHAN GORMAN HAS thrown doubt on the reputation of Daniel Dubois as a concussive puncher.

The feuding pair will meet with the British heavyweight title at stake at the o2 Arena on July 13 and most pundits would probably predict any KO finish to be in favour of Dubois.

The young Londoner has wowed the crowds since turning professional in April 2017 and subsequently employed his apparent bludgeoning power to stop 10 of his 11 opponents so far.

“Yes, I’ve shared the ring with him on numerous occasions,” reflected the 22-year-old pupil of Ricky Hatton. “Yes, it was three or four years ago, but unless he has developed monstrous, monstrous power then nothing really can trouble me.”

Not that Gorman intends to test out his theory regarding the power of Dubois.

“People have yet to see how tough I am,” he added. “I am a very tough man, but there are no awards for being a tough man in boxing, is there? So I will avoid those punches.”

DANIEL DUBOIS IS well aware that he has been viewed as the silent partner when it came to calling out for a fight against Nathan Gorman.

Gorman has been vocal in expressing a desire for the fight pretty much since his former Team GB teammate and rival burst onto the professional scene, notched up 10 KOs from his 11 fights and won five title belts along the way.

Dubois, with his typical reserve, has kept his counsel, got on with his job and bashed up everyone who has been put in front of him.

That is not to say he did not want the fight and he has proved as much by signing up for a shot at the British heavyweight title against Gorman at the o2 Arena on July 13.

Dubois is ready to dance and firmly believes it will be him calling the tune when the two top young heavies meet under the lights in London.

“We’re fighters and we need each other, we need dance partners,” reflected the 21-year-old. “This is the next one so let’s get it on.”

It was thought this spicy showdown wouldn’t come about until much later in the year, especially when Dubois was put forward to fight Joe Joyce for the Lonsdale belt.

Joyce is now attending to alternative business and Dubois certainly has no issue with it being brought forward.

“Yes, very happy,” he stated. “I think it is just right and the right fight to make. It is perfect for my style and I want to get it on, I really want to get this fight on and I am looking forward to it.

“It is exciting for me and, with the mood I am going to be in on fight night, I can’t wait.”