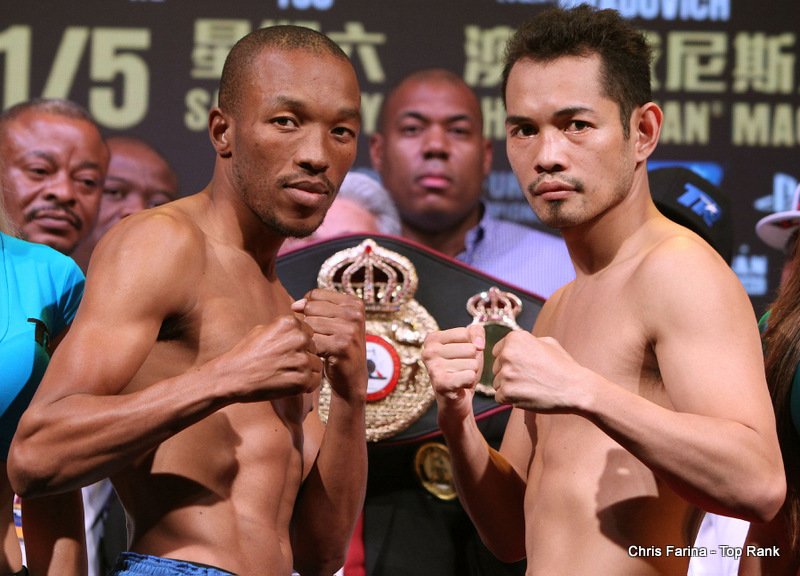 Promoted by Top Rank®, in association with Tecate, PS4 and Foreman Boys Promotions, “Featherweight Fury- Donaire vs Vetyeka” will be televised in the US on HBO, same day at 4pm ET/PT

Donaire vs. Vetyeka live on BoxNation

Filipino hotshot Nonito Donaire is ready to begin a new era of dominance when he challenges Simpiwe Vetyeka in his bid to become a five-weight world champion.

The 31-year-old is looking to get his career back on track following a disappointing 2013 which saw him lose to skilled Cuban Guillermo Rigondeaux before scraping past Vic Darchinyan with a ninth round knockout, having been down on the judges’ scorecards.

‘The Filipino Flash’ takes on Vetyeka for the WBA Super featherweight world title this Saturday, live on BoxNation, with the aim of looking like the man who claimed the 2012 ‘Fighter of the Year’ accolade and was a constant name in the mythical pound-for-pound list.

“2013 was a year I would say was covered in darkness, but that’s how life is,” said Donaire. “For me this is a new beginning with Vetyeka. He’s an amazing fighter and we understand what he’s capable of. For us this is a statement, regardless of whether I have it or not. And that’s something everyone will be excited to see. And we’ll find out Saturday,” he said.

Taking place from the Cotai Arena in Macao, the former super-bantamweight king is making the move up to the 126 pound featherweight division as he looks to go back to the drawing board following a tough year.

“Last year I got away from what made me successful and I paid the price for that when I met Guillermo Rigondeaux. And even when I knocked out Vic Darchinyan in our rematch last year, that wasn’t the best me,” said Donaire.

“It’s been a long time since I entered a fight as an underdog but that has inspired me more. I re-evaluated everything. I moved my training camp to the Philippines to take advantage of the heat and humidity and to eliminate the distractions I had in Las Vegas.

“It was a great move. I let a lot of things I worked hard to achieve slip through my fingers last year. I want to return to where I was in 2012 and go beyond that for the remainder of my boxing career,” he said.

Vetyeka enters the ring on a high following his sensational win over the hugely respected Chris John last December.

With 26 wins in his 28 fights, and coming off a convincing win over one of boxing’s slickest operators, Donaire is well aware of the threat the South African possesses.

“I had to work on a lot of things in camp because Vetyeka is so multidimensional inside the ring. He’s dangerous and has a lot of weapons,” he said.

“His last two fights were knockout victories of Daud Yordan and Chris John. Those are two tough guys. But I am confident I have the game plan and the talent to beat him. There is no doubt that May 31st at The Venetian Macao is going to be my finest hour,” said Donaire.

The exciting switch-hitter will also have his father back in his corner, who joins as head trainer, and he agrees with his son’s honest assessment of his recent outings.

“I agree with Nonito 100%,” said his father Nonito Donaire, Sr. “Nonito got away from what made him great – his speed and footwork in combination with his power. Last year he just came forward, didn’t move his head and relied too much on his power, and that’s exactly the wrong way to fight a pure boxer like Rigondeaux as we all saw.

“This camp we went back to Nonito’s bread and butter – creating a mix that combines speed, movement and power. I have never seen a fighter work harder and totally dedicate himself to his tasks than Nonito did during this training camp,” he said.

The 33-year-old Vetyeka was to the point in his evaluation of the fight and can’t wait to get in the ring.

“Thank you to Nonito for accepting my challenge. I’m the champion, but I chose to fight Nonito and he accepted. Fight night I’ll make sure I defend my title successfully. That’s why I’m here,” said Vetyeka.

Donaire vs. Vetyeka is live and exclusive on BoxNation (Sky 437/490HD & Virgin 546) this Saturday at 2pm. Visit www.boxnation.com to subscribe.