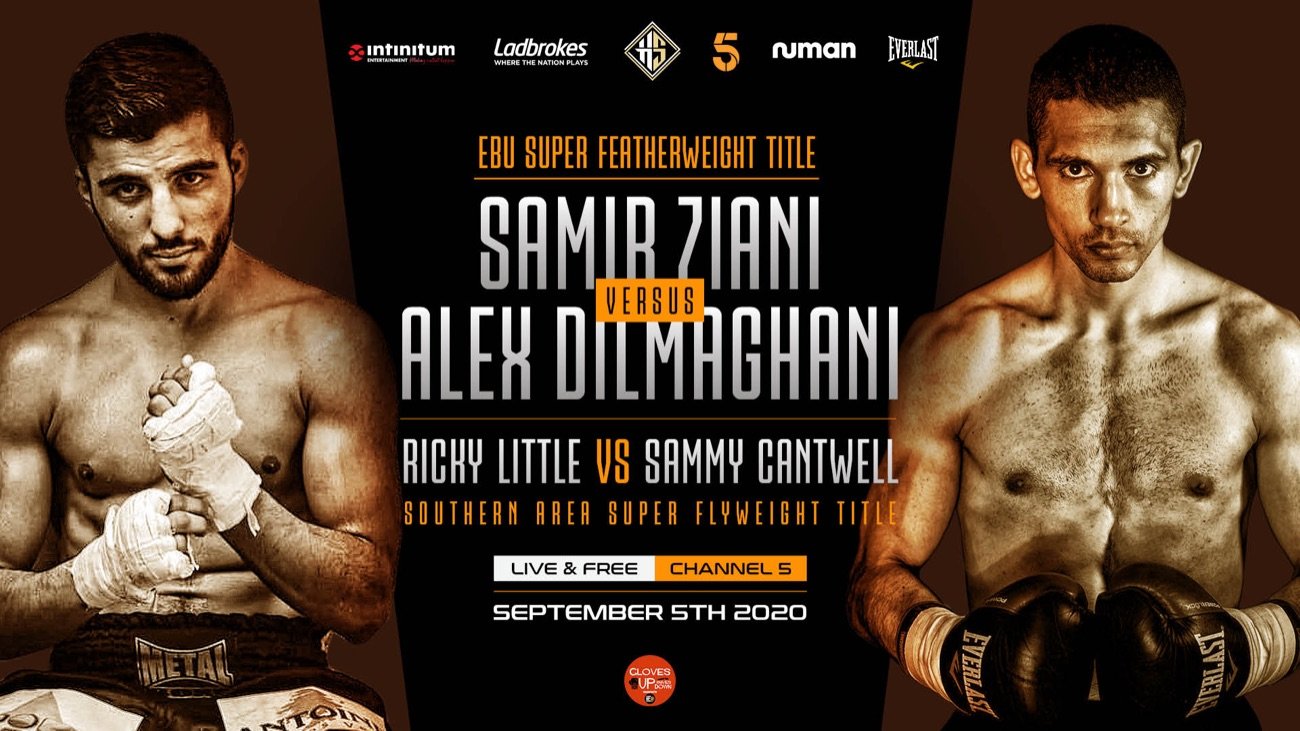 As Alex Dilmaghani heads into his crunch showdown with European Super-Featherweight Champion Samir Ziani this Saturday night live on Channel 5, he looks back at his brutal war with Francisco Fonseca last year.

The judges might have deprived Dilmaghani of the victory he felt he merited in his challenge for the vacant IBO Super-Featherweight crown last November, but the classy Crayford contender takes nothing but positives from his Fight of the Year contender with nuclear hitting Nicaraguan Fonseca last November.

Dashing ‘Dilma’ was ahead on all cards after eight rounds but when craniums crashed in round nine, the smooth southpaw was compromised by a horrific cut which severely impaired his vision. Still, he bravely staved off the lethal Latino over the final third to scoop a share of the spoils after 12 high grade but brutally violent rounds.

‘It certainly advanced me, gave greater awareness of my name to the fans in a potential Fight of the Year,’ claimed the articulate and intelligent Southampton University law graduate who remains unbeaten in over nine years and 15 fights (one No Contest).

‘The biggest improvement was to my confidence. I proved several intangibles. Firstly, I absorbed punches from a proven puncher which I knew already as I’ve never been down, amateur, pro or gym and I sparred some ‘killers’ in Mexico. Secondly, I showed heart to cope with a really bad cut and come through. Thirdly, I showed I could sustain a very high pace over a 12 round war. Whilst I always THOUGHT I could, now I KNOW I can.’

The Nicaraguan nightmare, a former two-time world title challenger who’d executed 20 of his 26 victims (just two losses) before the final bell, provided easily the stiffest test of Dilmaghani’s 11 years punching for pay. But the 29 year old ‘Plague’, who served his ring apprenticeship in the vicious gyms and brawl halls of Mexico City, passed the exam with distinction.

‘I don’t enjoy any fight. It’s simply work to me but it confirmed that I belong in world class,’ claimed Alex who now challenges Frenchman Samir Ziani for the European crown at a TV studio in South Kirkby this Saturday (5th). Channel Five broadcast live.

‘It was a ‘bad blood’ type of fight. All eyes were on me. I suppose I could’ve boxed more, moved to the side more, but we didn’t like each other. It was a put your balls on the table type of fight and I felt I beat him at his own game.

‘The butt in round nine didn’t just cut me, it concussed me. I guess it depends how you score but in the close rounds I was the aggressor. I thought I deserved to win. Fonseca might have thrown a few more but I landed cleaner. Afterwards, I felt fine, ready to go again a few days later. Clearly I’m cut from a different cloth, made of different sh**!’

With business unfinished, supremacy unestablished, fight fans were left salivating for a replay but the principals have temporarily opted to tread alternative paths.

‘Fonseca wanted too much money for a rematch but it can still happen down the line,’ disclosed ‘Dilma’.

‘After sharing a war like that, of course there’s respect but we definitely don’t like each other. It’s intense!’

“SAMIR WILL WEAR DILMAGHANI DOWN UNTIL HE ‘TAPS OUT’ OR THE REF RESCUES HIM!”

Gallic God of War Samir Ziani has no intention of allowing the European super-featherweight crown he has worn for the past 19 months to slip from his concrete head, when he cracks skulls with Crayford contender Alex Dilmaghani this Saturday night in Wakefield, exclusively live on free-to-air Channel 5.

‘We’ve already had the talks with Top Rank regarding (WBO 130lb ruler) Jamel Herring once we’re able to get Samir a visa to enter the United States. That’s the plan and Alex Dilmaghani certainly isn’t going to spoil it.

The brutish French ogre, from the Toulouse suburb of Blagnac, has been grinding bones to make his bread for over 10 years and 264 pro rounds yet, despite warring with several champions across a host of countries, is yet to be toppled from his feet.

‘Samir’s got a granite chin, fantastic endurance and he’s scared of nobody,’ continues Corkman Hyde who assumed the managerial reins shortly before Ziani collared the EBU belt by smashing Spain’s Juli Giner in Barcelona (RTD6) in February 2019.

‘Even sparring welters, he’s never been over. He fought Richard Commey – a monstrous punching two-time world champion at the weight above – no bother at all. And Samir was a bit hard done by that night (Ziani lost a tight 10 round decision in Denmark in 2014). He was all set to fight Herring for the world title this summer until this Covid hit.’

Beyond the ropes, the 5ft 6in father to an infant son works with the region’s retail giant GiFi. Professionally, he has yielded just three times in 35 paid outings (one draw) and is presently world-ranked by both the WBC (15) and IBF (12). Now 30, he arrives in his physical prime.

‘Samir’s a bubbly little fella, a genuine family man, very pleasant with everyone….until he puts on the gloves!’ claims Hyde.

‘Most southpaws are counter punchers but not this fella. I’d not be giving away any secrets or game plans when I say Ziani fights only one way – in your face from first bell to last.

‘He’ll jump on top of ya, stay on top of ya so you’ve no choice but to fight with him. The punches come at ya, non-stop. He’s very hard to stave off. While he’ll not ‘spark’ Dilmaghani with one, he’ll catch him in abundance, wear him down until he ‘taps out’ or the ref rescues him.’

Mahogany-hard Ziani enters Saturday’s showdown with a huge sway in experience, having previously held minor WBC and WBA baubles at lightweight plus the French national belt down at 9st 4lbs. His CV lists more than double the rounds shown on ‘Dilma’s record. Whilst this is his bow in Britain, he has previously triumphed in Italy, the Ukraine, Morocco and Spain.

‘As a pro for 10 years, he’s very well-travelled; a consummate professional who doesn’t mind where he fights. The ring might be in England on Saturday but Dilmaghani has no advantage, no home crowd, no home judges.

‘Mick Hennessy has been trying to do this for about 10 months and now we’re here. Dilmaghani’s come up short a few times already so this last chance. He has to win. All the pressure is on Alex, Samir is deadly cool.’

And the Irishman claims his turbo-charged ward shall be pounding some pain into the classy Crayford southpaw come Saturday.

‘The style’s will really match up well because Dilmaghani throws plenty himself. It’s going to be a right battle, all-action, but we’re not here to give up our titles,’ concludes Hyde.

‘I guarantee Samir will give it his very best shot on Saturday and we’re confident that will be more than enough.’