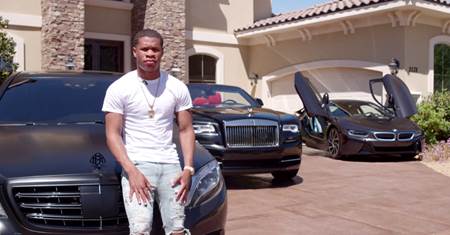 WHAT: SHOWTIME Sports delivers a behind-the-scenes look into the life and training camp of blue-chip prospect Devin Haney as he prepares for the toughest test of his career against Mason Menard in the main event of ShoBox: The New Generation this Friday, May 11, live on SHOWTIME at 10 p.m. ET/PT from 2300 Arena in Philadelphia, Pa.

The undefeated Haney (18-0, 12 KOs) makes his ShoBox debut against the seasoned Menard (33-2, 24 KOs) in the 10-round main event of a four-fight telecast featuring a number of ShoBox veterans.

The young and flashy Haney turned professional at the age of 16 in Mexico. He has earned a reputation as a boxing prodigy, having sparred with Sean Porter, Jessie Vargas and Floyd Mayweather, who he aspires to emulate both in and out of the ring.

“Coming up in the area with Floyd, you see all the cars, all the jewelry, all the money he has,” Haney said. “That’s what I’m working for.

“I’ve been calling out all the big games names in my weight class. A lot of them have been turning me down.”

In the eight-round opening bout, undefeated super bantamweight Arnold Khegai (11-0-1, 8 KOs) will take on skilled veteran Adam Lopez (16-2-2, 8 KOs). It will be the record seventh appearance for Lopez on ShoBox.

The Respect 90 Foundation and Cubs Charities will hold their Fourth Annual Main Event on the evening of Friday, May 25, at the Wintrust Bank Building in Chicago. The event will begin at 6 p.m.

In its first three years, the event has raised nearly $400,000 for youth boxing programs in Chicago.

Chicago native Al Bernstein is best known to a national audience as the voice of boxing for ESPN, as well as other sports such as Major League Baseball, and now since 2003, as the analyst for Showtime Championship Boxing. He also served as a boxing analyst for NBC’s coverage of the 1992 and 1996 Olympics. Now in his 37th year in television, this World Boxing Hall of Fame broadcaster is considered by many to be one of the most recognizable and respected boxing commentators in the sport.

A portion of the proceeds from the event will benefit nonprofit youth boxing programs in Chicago.