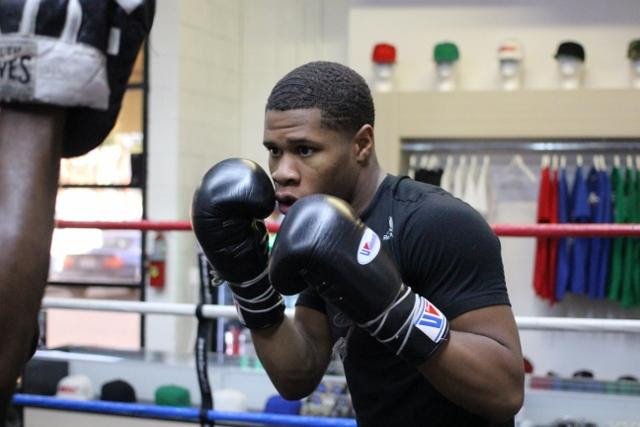 Highly regarded undefeated lightweight Devin Haney will face the toughest test of his career in veteran Mason Menard in the 10-round main event of ShoBox: The New Generation Friday, May 11 live on SHOWTIME (10 p.m. ET/PT) from 2300 Arena in Philadelphia.

The 19-year-old Haney, who was a seven-time national junior amateur champion, has been considered a blue-chip prospect since turning professional at the age of 16 in Mexico. Haney (18-0, 12 KOs) will face by far the toughest opponent of his career in his ShoBox debut against Menard (33-2, 24 KOs), a two-time ShoBox veteran whose only loss in nearly a decade came to current WBO Lightweight Champion Ray Beltran.

“The boxing world will see something they’ve never seen a 19-year-old professional boxer do,” Haney said. “I’m intimidating and I know it. I’m thankful to SHOWTIME and Mason Menard for giving me this opportunity, unfortunately for him, he will get a chance to see first-hand what all the hype is about. I’ve been sparring with former world champions like Jesse Vargas in preparation for this fight. The fact that I’m fighting in the main event is bringing out the best in me. It’s my time to show the world what I’m made of and I’m coming to make a statement in this fight. Mason Menard is in trouble!”

The young and flashy Haney fights out of Las Vegas, where he has earned a reputation as a prodigy having sparred with Floyd Mayweather, Shawn Porter, Jessie Vargas and Rances Barthelemy. He compiled an amateur record of 130-8 and received a special exception from the Nevada State Athletic Commission when he was just 17 years old to make his U.S. debut on the undercard of Manny Pacquiao vs. Timothy Bradley III.

Haney, who is trained and managed by his father, William Haney, has been active since turning pro with nine fights in 2016 and seven in 2017. In his last fight on Nov. 4, he scored a fifth-round TKO against Hamza Sempewo in Atlanta.

Menard had an emphatic win in his ShoBox debut in 2016 with a brutal Knockout of the Year nominee of previously unbeaten Eudy Bernardo. He returned later that year with a knockout victory of Bahodir Mamadjonov before facing Beltran on short notice. Prior to the 2016 loss to Beltran, Menard’s only blemish was a 2008 defeat in just his third professional fight.

“It’s a privilege for me to be able return in a fight on national television again,” Menard said. “My all-around game will be different. I have a new team, a repaired shoulder and a different outlook on things. Haney may be undefeated, but he’s never faced anyone like me. If everyone expects me to fold against an untested prospect they are in for a big surprise.”

After facing Beltran, Menard changed trainers and is now based in Los Angeles with trainers John Pullman and Buddy McGirt.

Tickets for the event, which is promoted by Greg Cohen Promotions, Devin Haney Promotions & Hard Hitting Promotions, are priced at $125 for VIP, $75 for ringside and $50 for general admission and are available at the 2300 Arena Box office or online at www.HardHittingPromotions.com