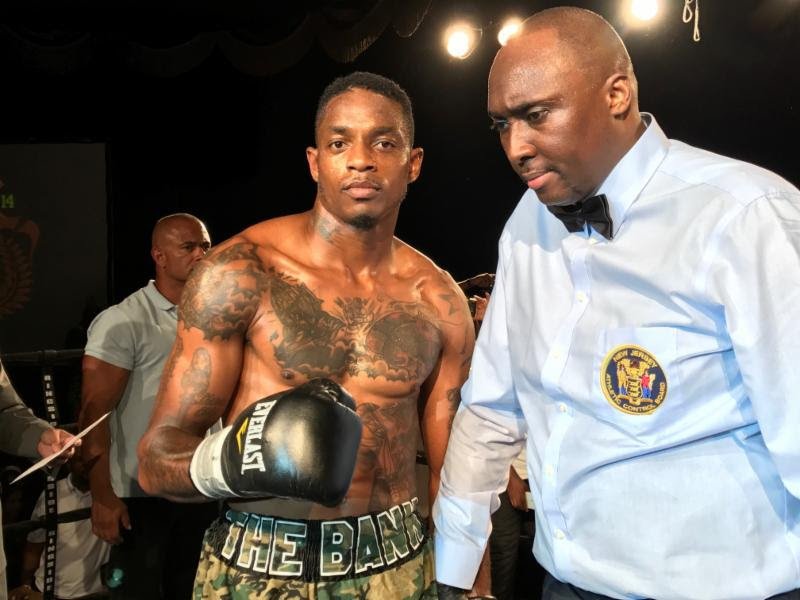 Super Middleweight contender Derrick “Take It To The Bank” Webster (25-1, 13 KOs) feels the time is now to take on the big boys of the division, but in order to secure a bout with a top contender or champion, he first must get by Oscar Riojas (16-9-1, 5 KOs) of Monterrey, Mexico in the 10-round main event this Friday night at The Claridge Hotel.

The show is promoted by Mis Downing Promotions.

Webster of Glassboro, New Jersey has been working hard in the gym as he prepares for this most important bout.

“I have had an amazing camp, I have been getting great work and seeing different looks,” said Webster, who has been working under the guidance of his long-time trainer Denny Brown.

In Riojas, he is facing a battle-tested veteran who has taken on seven undefeated opponents as well as 2 world title challengers.

“I know he has fought Brandon Robinson. Robinson is a close friend to me, and what I saw in that fight is that Robinson hit hIm with some good shots, and I don’t know how he withstood them. Riojas came in after another opponent fell out for me. The funny thing is that he thinks that he can beat me, but on June 1st, he will know that he does not belong in the same ring as me.”

Webster has been looking for a signature fight in the suddenly hot 168-pound division, and after this fight on Friday, Webster will be looking to make his mark.

“I am ranked number-5 in the USBA, so maybe someone for that belt or the NABF. I have to fight for the bigger regional titles as a pathway to the world championship. I have been kasking for Groves after he gets done with the WBSS Tournament or WBA champion Tyrin Zeuge. I would also like to take on WBO champion Gilberto Ramirez.”

‘It means everything to me to be competing on this weekend. It’s great to fight in front of the legends of the sport. This last year has been rough, as I have been going through a bad situation in my personal life, but I have to thank Mis Downing, Roy Jones Jr., Ray McCline and my trainer Denny Brown to have helped me get through this. Last year, I had to choose my relationship, and then I lost it, but it opened up a door to get with Mis Downing Promotions and Ray McCline. It has helped me become 3-times the person. It has helped me in my acting career and my boxing career. Now is the time to show the world who Derrick Webster really is.”

“I am 100% focused, and I am going to display who Derrick Webster is, and that is a guy who will put on a fantastic performance on Friday night.”

Carlos Rodriguez of Louisville, Kentucky will make his pro debut will fight Eliot Brown (1-4, 1 KO) of Erie, PA in a lightweight bout.

Isaiah Hart of Atlantic City will make his pro debut against Leon DeShields (0-3) of Philadelphia in a middleweight bout.

Feliz Manzueta (1-0) of Dover, Delaware will box against Antonio Allen (0-7-1) of Philadelphia in a welterweight bout.