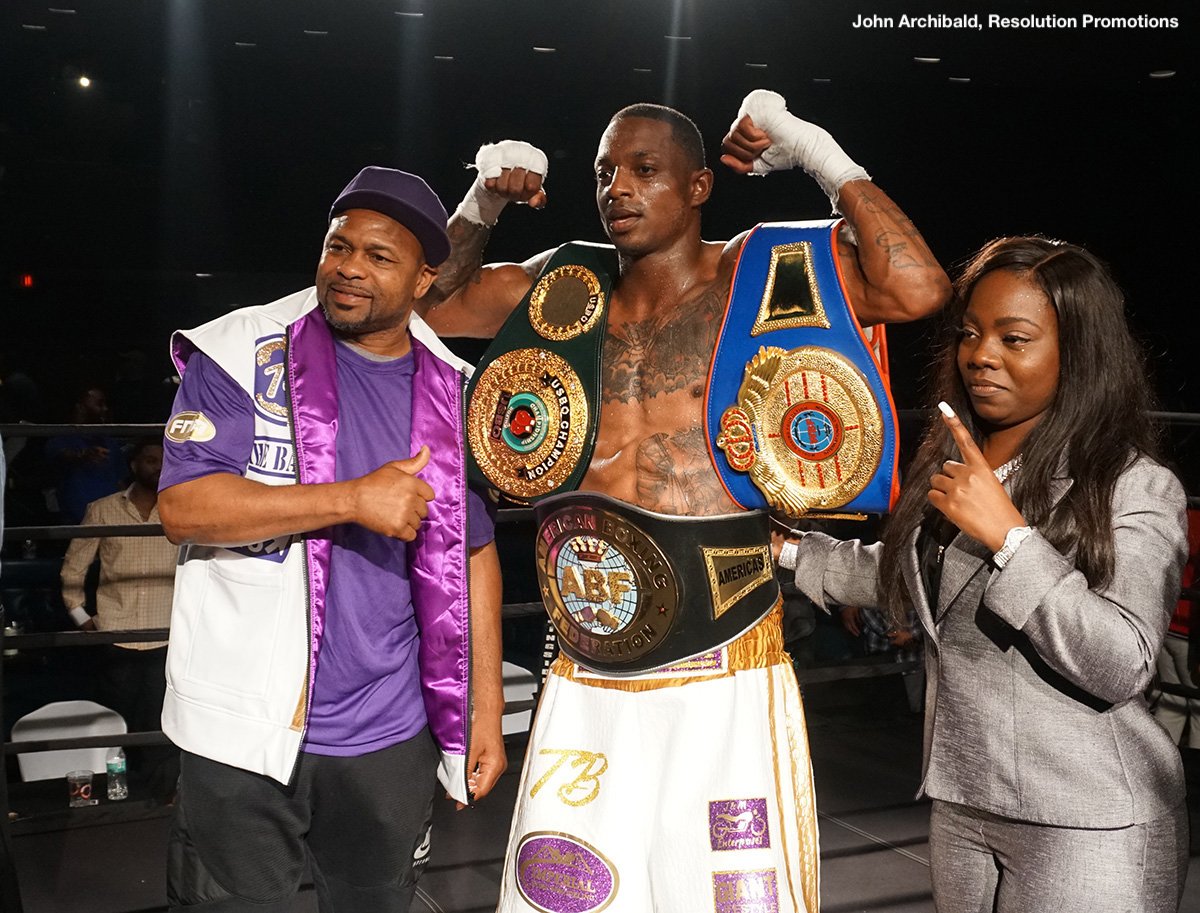 Atlantic City, N.J. – Super middleweight Derrick “Take it to the Bank” Webster (26-1, 13 KOs) was back in action on Friday night at the Claridge Hotel in Atlantic City, defeating Oscar Riojas in a fun 10-round main event. Webster used his length to keep the gritty veteran on the edge of his range throughout the night, claiming the American Boxing Federation (ABF) Continental Americas Title with flush 100-90 counts from the three ringside judges.

The card was hosted by Mis Downing Promotions as part of the 2018 Atlantic City Boxing Hall of Fame Weekend. As is always the case, head trainer Denny Brown ran the corner for Webster, and he also had a close friend nearby in six-time world champion Roy Jones, Jr.

“Before the fight, Roy told me to stay long,” Webster said. “He told me ‘You’re 6-4, so fight like you’re 6-4.’ I kept the jab on him the whole fight, and it was all about keeping him away from me. If he came inside, the goal was to hit him with something big. In every round, I tried to get stronger and keep him frustrated because he couldn’t get away from my jab. He tried some antics to get in my head, but, when he did, I went in his mouth.”

Webster did a great job of working behind the jab during the 10-round contest, using his speed and footwork to prevent Riojas from getting much offense going. Another element of his game that proved to be very beneficial was the focused bodywork that he was unloading throughout the fight.

“Denny has been trying to get me to become a body snatcher,” Webster remarked. “I think I started a little late with the body punching, but I could tell I was being effective when I hit him to the body. Ultimately, body punches are what slows down the momentum of a guy who brings pressure like he does, and that’s what I was trying to do.”

With the jab and body attack working, Webster started to find more openings as the bout progressed. Riojas also stayed in the pocket himself, which cooked up the perfect recipe for an entertaining fight. Webster remained in control of the action, but both combatants made sure they gave the fans their money’s worth all the way until the final bell.

Following the win, Webster reflected on the impact of having Roy Jones, Jr. continually supporting him, head trainer Denny Brown and the rest of his team.

“The fact that Roy always takes the time to be in my corner means everything to me,” he stated. “Roy can actually turn me inside-out and have me ready to destroy anything. I know exactly what he expects of me, as well as what Denny is expecting of me, and I just try to execute that to the best of my ability.”

Friday night marked the 26th professional victory for Webster, who also earned his sixth regional title with the win. He now looks to weigh all possible options in terms of his next fight, seeking out the opportunity that will get him another step closer to his ultimate goal of becoming a world champion.