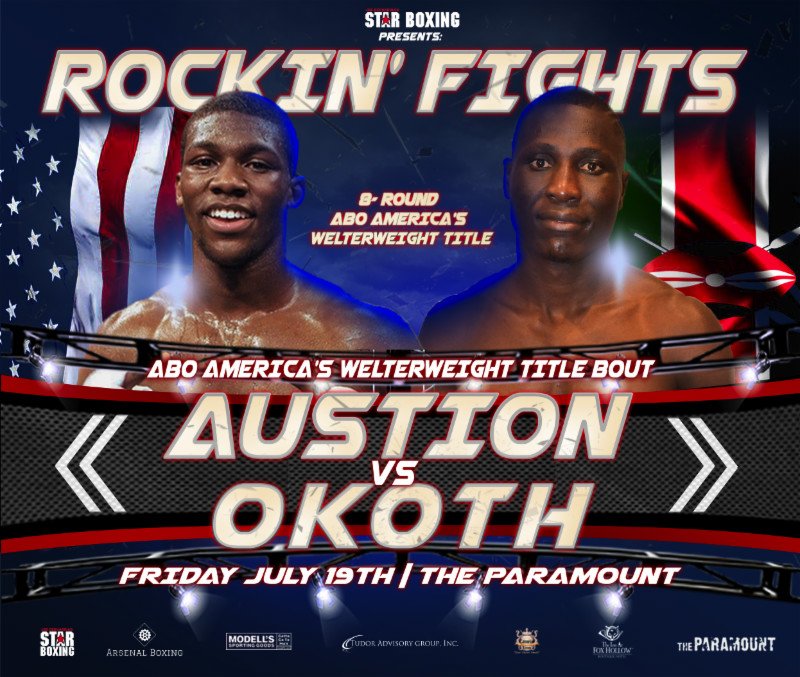 Both fighters have had an interesting path leading up to this welterweight tilt at The Paramount on July 19th. Ronnie Austion (10-1 6KO’s), a highly touted prospect, now fighting out of Las Vegas, was an amateur standout. Boasting a record of 95-20, a Ringside National Champion, Junior Olympic Champion and Olympic qualifier, Austion was primed to make a run at the professional ranks. After starting 10-0, Austion hit the first roadblock of his young career, losing a decision to MARQUISE “THE HAWK” HAWTHORNE (then 5-9 1KO) in an uncharacteristic showing from the Detroit product. However, Austion promises to use the experience to come back better than ever and prove that the loss was a fluke. He will step into the ring, fighting for the first time in New York, in front of an anticipated electric crowd at The Paramount, with his future and the ABO America’s title on the line.

Across the ring, Dennis Okoth (Silver Springs MD, by way of Kenya 3-2-1 2KO’s), has also taken an unlikely path to The Paramount on July 19th. Okoth, a Junior Olympian himself, has fought four undefeated opponents in six bouts, with a total combined record of 32-5-1. Okoth shocked the boxing world in June, when he defeated #2 rated Irish welterweight sensation, DYLAN “THE REAL DEAL” MORAN (then 10-0 5KO’s) at Resorts World Catskills, in Star Boxing’s “Catskills Clash.” In emphatic fashion, the Kenyan native landed a clean shot to the temple of Moran, sending Moran to the canvas for the first time in Moran’s career. Smelling blood in the water, Okoth did not take his foot off the gas, dropping the Irishman two more times in the third round to earn the ABO title. This regional title fight will be 8 rounds.

While both men come from vastly different parts of the world and have very different stories, their path’s will officially cross at The Paramount on July 19th. One thing is for certain – each plan on returning home with the ABO America’s Title. For Austion, this is an opportunity to right his ship, showcasing the talent the boxing world knows he has, while on the other hand, Okoth has the opportunity to show that his recent upset victory was no fluke. A star prospect coming off a massive upset loss against a newly crowned champ coming off a huge upset victory – boxing has compelling human drama and this drama show will play itself out in the ring at the Paramount on Friday July 19, 2019.